Some highlights from the 2013 Australian Romance Readers Covention (The Mercure, Brisbane — March 1 to 3, 2013).

I apologise for not posting detailed recaps of the Australian Romance Readers Convention in Brisbane a couple of weeks ago. Allison (Decadence), Jen and I attended the event, but we did so as readers first and bloggers maybe second or third—we all wore different hats over the course of the weekend—so I haven’t wanted to put pressure on us to record the event. (You’ll notice that even our tweets weren’t as extensive as they’ve been in previous ARRCs.)

Nevertheless, I know many readers who wanted to come along to ARRC but were unable to do so, and I wanted to share some of the highlights of the weekend with you. Bear in mind that I didn’t go to all the panels and keynotes, so I’m using my Storify stream to fill in some of those blanks. If you’re after a panel-by-panel recap, check the next issue of the ARRA newsletter. I believe a few of the sessions were recorded, so you can also email ARRA to check if they’re releasing an audio CD.

This year’s convention swag bag was sponsored by paranormal romance author Nalini Singh and designed by our very own Jen (check out her portfolio at www.jenniferwu.com.au). The bag contained books, pamphlets—many of them with promotional discounts for ARRC attendees—author-branded souvenirs and, yes, a Book Thingo postcard! (This was also designed by Jen.) 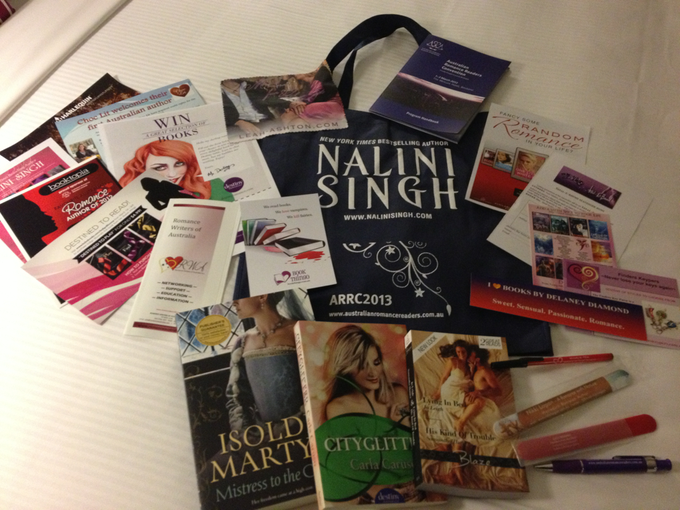 A quick note to anyone thinking of sending us postal mail: the address on the postcard is incorrect. Yes, my proofreading skills totally failed us. The correct address is: PO Box 558, Pyrmont NSW 2009.

The conference programme was deliciously thick and promised a really exciting weekend. I’m still amazed at how many authors were able to participate in the sessions.

The book signing on was a great success, so far as I could see. As usual, anyone who came along left the signing with a pile of free books from Mills & Boon authors. I think we need to do something about having something more relevant than a signing for e-published authors. Yes, some of them have print releases, but for those who don’t, I wonder if there’s a better way to run a signing for them. If you’re an e-published author, feel free to add your 2c in the comments.

I love that ARRA runs a booklet signing contest, because it gives readers lots of opportunities to approach authors they may otherwise have walked past. The general vibe in the room was very positive, and the longest line was always in front of Nalini Singh. A few readers literally brought in pieces of luggage filled with books.

This year, there were a lot of bribes gimmicks strategies to entice readers. The standout centrepiece was the cupcake stand next to Danielle Lisle. Each cupcake was topped by a small book made of icing sugar with her book cover on  it. I’m told it was made by a relative, and I have to say it was truly impressive. Quite a few authors had chocolate giveaways—Hershey’s Kisses seemed particularly popular, and I think we may have Costco to thank for that!

Kobo was also very visible during the conference, and I’m jealous of everyone who won a Kobo Glo! They had lip lollipops, bright pink t-shirts and notepads to give away, and a passe-tête (aka those things that you stick your head through) for photo ops. After the book signing, Kobo hosted a special event for a small group of readers to meet author Indigo Bloome. I…may have crashed the party. Totally by accident! I’m not even kidding. The Kobo team were very gracious, however, and I even managed to chat briefly with Indigo.

The trade displays were much more visible this year than in the previous conventions, and they were also much more polished and very much targeted to the romance community.

Authors at the contemporary location panel said that epublishers are more open to different settings. Anything goes as far as location is concerned, but authors face the challenge of handling cultural differences with tact and authenticity.

The e-publishing panel, which consisted of three authors and Malcolm Neil, from Kobo, was pretty full-on, with audience members sometimes openly arguing with the panelists. This session had a kind of strange vibe, to be honest. The audience questions included quite a few assumptions or comments that were incorrect, and a few of them came across as antagonistic.

Speaking at the category romance panel, Haylee Nash commented that digitisation of backlists are extremely difficult due to contracts and lack of digital files for those books.

At the erotica panel, during a discussion around limits, a publisher said she would have rejected Fifty Shades of Grey because of the tampon scene.

Mills & Boon covers are being updated. They’re using ribbon colours along the ‘shade-o-meter’ to indicate heat level. Blaze, which is the hottest, will be black. I think the least explicit is blue.

By July 2013, there will co-ordinated releases between Harlequin USA, UK and Australia. They compete for the same readers.

In Australia, Sexy is by far the best selling line for Mills & Boon. Because Kiss is still a new line, in Australia those titles will be marketed through the Sexy line to target these readers. Harlequin Australia will wait and see how well Kiss does in the USA.

France is the biggest market for the Medical line. There is no market for it in the USA.

The biggest royalties for authors are from English markets, regardless of format.

Speaking of potential competition from digital publishers in the category space, Haylee Nash believes publishers will be challenged by the speed to market required for category.

All authors were in agreement that ‘delivering the line promise’ is crucial in category romance.

I asked the panel if the length of a category novel is important because we need to finish it before the train arrives at the station? They answer was, unanimously, yes. ‘It’s like heroin for readers.’

What authors said they’d like to write in category romance (but so far have not been able to):

The hotel concocted three celebrity cocktails for the keynote speakers. The Rachel Vincent was a mojito, the Anne Gracie was a margarita, and the Kristan Higgins was an Appletini.

Rachel Vincent predicted that teen dystopian stories will be the next big thing on TV.

Kristan Higgins keeps a list of potential second husbands that she periodically gets her firefighter husband to approve!

Cathy Maxwell had a hilarious story about meeting Barbara Cartland, which apparently involved a male librarian.

It was fabulous to see the Bling Off taking on a life of its own. There was a lot of variety this year, and I even spotted a few tiaras. No sparkly vampires, however.

Rachel Vincent hung out in my room! And I have no picture to prove it. *sob* Because the rain would not stop all weekend and The Mercure’s bar closed around midnight, a few of us had Tim Tams and wine in my room after the awards dinner. I can’t actually remember much of what we talked about but I’m sure it was probably a bit rude. :D Also, Jen pointed out that my room was designed for a stripper outcall, and she was totally right. (No, we did not have strippers.)

‘I’m Anne Gracie, and I need a hero.’ Anne Gracie played a video montage of romantic heroes (read: lots of men in cravats riding horses and giving smouldering looks) to the song Holding Out For A Hero in what will go down as one of the most memorable events in the conference. (You can view the video here, but the audio was removed so you’ll have to do your own audio syncing.) Her keynote speech was fantastic—there was singing, there was poetry and there was even a bit of smut. The audience absolutely loved it. She’s an excellent speaker.

According to Nalini Singh, Angel’s Blood was meant to be a standalone book, but it turned into a series.

Amy Andrews spoke a bit about being published outside the romance genre. She said that non-romance publishers want to know where the tragedy is. ‘Can’t we all just be happy???’ Her next hero is a bodyguard, who is also an amputee.

Nalini Singh revealed that she keeps her world building information in a private Wiki. One day, it will become public.

The erotica panel had a blindfolded show and tell featuring sex toys, including a crochet-covered coat hanger. I’m…not sure I want to know. There was also a fake orgasm.

The romantic suspense panel was run as a murder mystery—someone has murdered the Book Bitch, an infamous reviewer: ‘Make sure she’s dead!’ I think this was the standout panel of the conference—it was creative, interactive and a lot of fun.

The heroine of Kristan Higgins’s next book is Honor, but we haven’t met the hero yet.

I think the question of when to let a book go was asked several times on several panels. The most common answer seems to be some variation of ‘When I hate it.’

‘Fifty Shades is really a billionaire story that Mills & Boon does all the time and better!’ (Unfortunately, I can’t remember who said it, but it was at the category romance panel.)

‘Romance readers don’t want to spend too much money on a book because there are so many books to buy.’ (Again, I can’t remember who said it but it was at the category romance panel.)