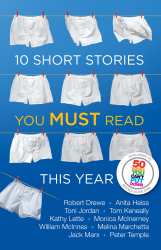 Review of: 10 Short Stories You Must Read

An excellent sampler of contemporary Australian authors. I rode the weekend on a wave of literary pleasure. The most startling thing about this anthology is that most of the works feature love stories. I rode the weekend on a wave of literary pleasure.

It’s worth buying a book listed in this year’s Book Alive Guide just for this anthology, 10 Short Stories You Must Read, which isn’t available for individual sale.

The collection starts off with Robert Drewe’s brooding story of unrequited love, in which the object of the protagonist’s desire happens to be his best friend’s wife. I very much doubt I’d read this as a novel, but the beauty of the short story is that it usually ends before properly resolving the central dilemma. A View of Mount Warning is no exception, which means I can cheerfully imagine the unfaithful husband dying from a Viagra-induced stroke, thereby freeing his wife and best friend to have their happily ever after.

I found the stories by male authors to be darker, moodier, more … well, self-indulgent. It’s not necessarily a bad thing, but I found many of the protagonists a challenge to relate to. (Also, none of the authors have websites!)

Tom Keneally’s Blackberries was the biggest disappointment for me. Perhaps my expectations were too high, or his narrative style is a little more ponderous that the other writers’, or it may just be that I had no sympathy for his protagonist—a middle-aged high school teacher who develops an infatuation with his new student, a Sudanese refugee. The prose smacked too much of Bringing Home The Message. It failed to move me.

Life in a Hotel Room by William McInnes was almost a showstopper. Certainly, it would’ve been a wallbanger had I not been in a perfectly civilised cafe at the time. His protagonist reflects on his life of constant business travel. At a hotel, he meets—wait for it—a Philippino. OMGWTF?!? I had to read it about 5 times. I thought, Maybe it’s deliberate. But in the absence of any other cues, what’s a reader to assume, especially given that the protagonist is such a well-travelled fellow? Author fail. Editor fail. All sorts of fail.

My least favourite protagonist in the book has to be Duncan in Peter Temple’s Ithaca On My Mind. I felt nothing but contempt for the obnoxious, egotistic writer past his prime and his miserable life surrounded by sycophants, enablers and gold-diggers. The twist at the end is unexpected, but my appreciation was significantly muted by my desire to see every character in the story jumping off a cliff.

Compare this with Jack Marx’s protagonist in Letter from a Drunk to a Long Gone Wife, who is arguably the most emotionally and physically brutal of the lot. And yet the prose is haunting, beautiful words juxtaposed with ugly images. This story surprised me at every turn—sure, I can argue it’s predictable, but only in the sense that Marx leads the reader from one awful realisation to the next. It’s a story of addiction, obsession, possession and madness. Why you’d end an anthology on such a tragic note, I don’t know, but it works in this case. I hated him. I wanted to save him. I’m not sure I could bear to read Marx’s novels. (Although I did read his Walkley Award-winning piece on Russell Crowe when it first came out. He can spin a yarn, that’s for sure.)

The female authors—and protagonists—provide relief from their more sombre male counterparts. I don’t feel I liked them better because they’re by and about women per se, but because the majority of these stories are more whimsical, more humorous, more optimistic. In that sense, I suppose, there’s some lack of diversity in this anthology.

Kathy Lette provides a respite following Drewe’s rather gloomy piece. Hate At First Sight is an irreverent, non-PC exploration of beauty and what happens women use it to measure their self-worth. Lette pokes fun at Sydney’s man drought and city/country prejudices.

‘The truth about finding a man in the outback is that the odds are good — but the goods are odd.’

‘How the fuck would you know? You’ve never been bloody well been out there!’ Jane broke free, her face shattering like glass. ‘You’re just judging the place on appearances, as usual. At least there are blokes out there – and any bloke is better than no bloke. Bloody hell. I’ve got so many Rampant Rabbit vibrators they need their own warren.’

‘Ah … I hate to break it to you, but I don’t think that’s what’s meant by the rabbit-proof fence,’ Louise punned superciliously.

‘It’s not funny! I’ve worn off a fingerprint.’ Jane waggled her fingers in her sister’s face. ‘I could perform the perfect crime, now.’

I bought one of Lette’s books that afternoon.

Anita Heiss and Toni Jordan offer some lighter fare. In You Can Change Your Life, Jordan uses a self-help seminar as a backdrop for a most unusual first meeting. This story has more of a chick-lit feel, and while I appreciated the humour, I didn’t feel altogether satisfied by the end. Still, the story shows Jordan’s strength in internal narrative and her engaging way of describing things. Maybe I’m biased because she wrote Addition, but skip this story and just buy her book.

Manhattan Dreaming features a more neurotic protagonist, Lauren, who has been offered a huge career opportunity, but who feels torn by family ties and her heart’s irrational desire to rekindle a soured romance. I loved Heiss’s depiction of stubborn Australian parochialism as displayed here by Lauren’s father:

‘Be happy for Lauren going to the Big Apple.’

‘Big bloody Apple, my arse. We’ve got Big Apples here, at Batlow, and there’s one somewhere in Tassie and another one in Queensland, so I don’t know why she’d want to go to some bloody big-noting-apple in America.’

‘Gray, c’mon love, you’re being silly. America has everything bigger and better than we have.’

‘Bigger? Better? I’m sure the Yanks don’t have a Big Banana, or a Big Avocado, and you can bet your bottom dollar they ain’t got a Big Mango or a Big Pineapple!’

‘And I bet they don’t have a Big Poo like Kiama, either,’ Max threw in, which even made Mum giggle.

… ‘There’s the Big Mushroom in Canberra, and there’s a Big Cow somewhere and a Giant Kangaroo, but ah, no, you women want to go to some Big Fancy Apple in America.’

Dad stood up and took his cup to the sink. ‘I’m sorry, love, but the Big Merino has been good enough for our mob for the longest time. No big piece of fruit is going to make me let any daughter of mine go to New York.’

That said, I couldn’t empathise with Lauren. Her lack of self-esteem was frustrating, and she doesn’t change much by the end except maybe to realise how silly she is.

Monica McInerney’s older, rather unusual protagonist is a welcome contrast from most of the comedic heroines in the anthology, and so too is the more internalised narrative in Elizabeth’s News. I love the notion of healing and making human connections through stories. McInerney explores grief and recovery, and the uniqueness of that process, which may be difficult for others to comprehend. In Elizabeth, McInerney conveys the sheer pleasure of pleasing oneself.

But my favourite in the anthology is a beautiful, bittersweet tale by Melina Marchetta. Surprisingly, it features a male protagonist. Twelve Minutes explores the innocence of love, its frailty against—and ability to survive—life’s cataclysms. It goes from euphoria to devastation in one flick of a page. It’s a story about risk and vulnerability and grief and it’s so poignant and heartbreaking and lovely that I read it twice in one sitting. Marchetta’s style is excruciatingly subtle, every sentence packed with nuance without crowding the reader.

I’m convinced it ends happily. It must.

10 Short Stories You Must Read is an excellent sampler of contemporary Australian authors, and I’d be surprised if you couldn’t find at least 1 story that entices you to pick up a book by the author. This anthology will keep you company on public transport or the doctor’s surgery. It’s the gelateria of books—you may not love all the flavours, but there’s nothing to lose by trying, you’re done in about 15 minutes, and if you’re lucky, you’ll be left wanting more.

10 Short Stories You Must Read is free when you purchase a book featured in the Books Alive guide. The offer is available from participating bookshops until September 30.