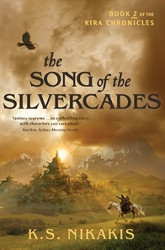 Congratulations to auntdel42, who won our Melbourne Cup sweep this year! I’ve sent an email to all the particpants, so if you didn’t receive it, please let me know ASAP. I would hate to deprive auntdel42 of her books!

I also offered some consolation prizes to the second, third last place getters. (I gave away two last place prizes because, technically, Descarado didn’t finish.) Since I’m giving away review copies and free books I’m unlikely to ever get to in my TBR pile, I thought I’d give the books a bit of a plug here.

All of them sound good—it’s just that they don’t hit my sweet spot when it comes to books. And now, hopefully, I’ve found better homes for them! Check out our winners’ picks… After America by John Birmingham

Four years after an inexplicable wave of energy decimated the American mainland, and then just as inexplicably disappeared a year later, US President James Kipper is no closer to explaining the catastrophe to the traumatised survivors.

In a decaying New York City, an assassination attempt on the President prompts the suspicion that the looters overrunning Manhattan may be more organised and sinister than previously thought.

Working on a farm in Texas to earn his citizenship, Miguel Pieraro believes in the promise of the New America. That is until tragedy cuts through his family.

In the English countryside, Echelon agent Caitlin Monroe must once again fight for her life, a sharp reminder that her nemesis is active again.

Then out of the smoking ruin of the Middle East comes an enemy that will be Kipper’s toughest challenge yet. The battle for the Wild East is just beginning, but does this New America, and its gun-shy President, have the strength of will to destroy the past in order to save the future?

This book was given to me by the lovely folks at The Australian Literature Review. Visit Pan Macmillan for more information about this book. Deep in the southern forests, the Tremen are being viciously attacked by their neighbours, the Shargh. As the death toll mounts, gold-eyed Kira, the Tremen’s most gifted Healer, flees north to seek help from their long-lost warrior kin, the Terak.

Even as her perilous journey has barely begun, Kira is forced to compromise her beliefs to rescue Caledon, a man driven by his faith in divine order and star patterns. In turn, his knowledge allows her to survive the perils of crossing the treacherous Azurcades. Kira soon realises that he sees her as part of a celestial plan, and begins to mistrust his intentions.

But not even Caledon can foresee what will happen when she meets the one man with the power to destroy all she has striven for. As the Shargh’s most ancient prophecy comes to life, ‘gold meets gold’, and Kira – and the Tremen – will never be the same again.

This book was a prize at the 2009 Australian Romance Readers Convention. Visit Allen & Unwin for more information about this book. You can read an excerpt here (PDF). That is Cooper Vance’s unbreakable rule—and he is living proof that it works! He’s successful, sexy, totally single, and that’s the way he likes it. Until he walks into an art gallery that he means to buy … and is confronted by a beautiful, smart-mouthed woman who’s determined to get him naked!

Artist Ariel Wallace needs a life model—fast—to finish the portrait that might save her gallery. Now the big-shot bachelor has to make a choice. Can he break all his own rules to make the deal of his life?

This book was a freebie from the 2010 ARRA book signing. Visit the author’s website for more information about this book. Note that the book has an Australian cover, not the UK cover (pictured). The Write Ingredients: Recipes from Your Favorite Authors by Lori Foster

Bestselling author Lori Foster and her online readers’ group, has maintained a troop project for the past several years. They have joined forces with over 90 of your favorite authors to compile a book of tasty treats to raise funds for the continued support of America’s Troops.

This book was a prize at the 2009 Australian Romance Readers Convention. Visit Samhain Publishing for more information about this book.