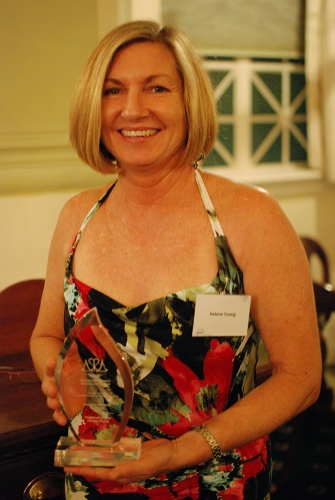 Campbell also retains her undefeated status in the Favourite Historical Romance section, the award going to her Avon Regency book Midnight’s Wild Passion. A representative from HarperCollins accepted the awards on Campbell’s behalf, reading a prepared acceptance speech that, in true Campbell style, had the audience smiling.

New Zealand author Nalini Singh picked up the most awards, winning  Favourite Sci-Fi, Fantasy or Futuristic Romance for Archangel’s Blade and Favourite Paranormal Romance for the much-anticipated Kiss of Snow, the latest book in the Psy/Changeling series, for which Singh was awarded the prize for Favourite Continuing Romance series for the third year in a row. Singh’s awards were received on her behalf by selected ARRA members. Singh had also pre-recorded her acceptance speech, which was shown to the audience after her final award was announced.

Shattered Sky was named Favourite Romantic Suspense. Queensland author Helene Young was the only winner who was able to personally accepted her award. Young’s next book, Burning Lies, with be released in July by Penguin Australia.

The Member of the Year award when to Amy and the Bling Off culminated in a mini-parade, with authors Melissa Craig and Travey O’Hara sharing this year’s Queen of Bling title. They will be time-sharing the tiara.

Guest speaker Paula Roe spoke about the the books that shaped her love of romance reading and, eventually, led her to try her hand at writing romance fiction. Her passion and enthusiasm for the genre had the audience smiling, at times laughing, as she described some of the earlier novels she loved (and loved to read out loud to her friends in high school).

Check out the photos from the event via Flickr. I plan to write up a longer post on my observations from the night, so watch this space.