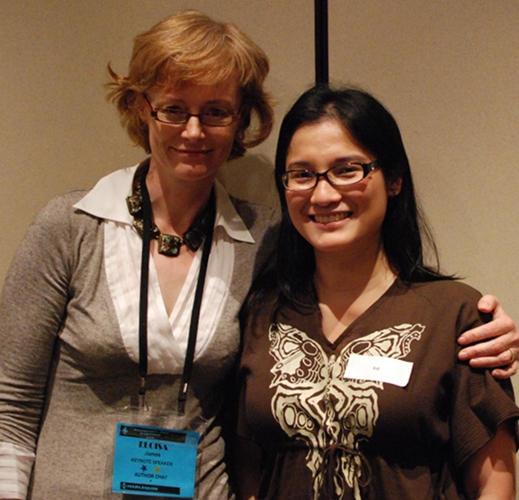 I’ve just come back from the ARRA signing at the QT Hotel, and I had a fabulous time. The event seemed very well attended, and many authors stayed beyond the allotted time.

And, yes, I MET ELOISA JAMES! I went a bit crazy. But she signed a modest stack of books for me, witnessed the collapse of my composure and then offered to have a photo taken with me.

Anyway. I met a bunch of other fantastic authors, which I won’t name because I also missed seeing most of the authors. I only managed to get through part of one row of authors before I ran out of time.

I saw Fiona Lowe’s RITA statue and spent way too much on books, including Eloisa James’s upcoming release. The format was a little strange this year because the bookshop was outside the signing, so I didn’t spend as much as I could have. Which is a good thing, I guess, but maybe not for the authors. I hope we go back to the old format next year of having books for sale next to their authors.

I picked up some free books, mainly category romances, and I’m looking forward to trying new authors and reading in some lines that I haven’t tried in a long time. (Medical, I’m looking at you!)

Check out our Flickr stream for more photos from the signing.