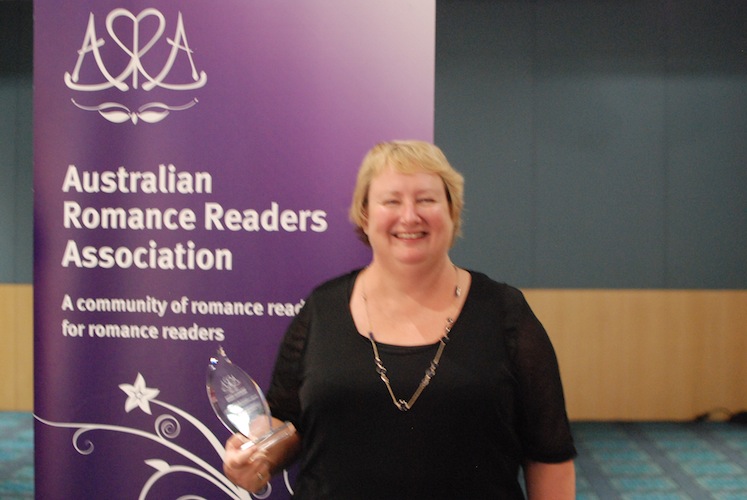 In which everyone played a game called Have A Drink Each Time Anna Campbell Accepts An Award…and everyone ended up drunk.

This year’s Australian Romance Reader Awards was dominated by historical romance author Anna Campbell, who took home the award for Favourite Australian Author, which she has won since 2010*. Seven Nights in a Rogue’s Bed won Favourite Historical Romance, a category in which Campbell has never lost. She also won all three minor awards for Favourite Meeting Between Hero and Heroine, Favourite Love Scene, and Favourite Cover. Since 2010*, she has not lost an award for she has been nominated.

Nalini Singh’s Psy-Changeling series was awarded Favourite Continuing Series. Singh remains undefeated in this category since it was first awarded in 2010*.

Bronwyn Parry also gave an emotional speech when she accepted the award for Favourite Romantic Suspense for Dead Heat. She previously won this award in 2010* and this year beat Nora Roberts, who was nominated three times (twice as J. D. Robb) in the same category.

In the minor awards, which were all won by Anna Campbell, the runners-up were Taming the Tycoon by Amy Andrews for  Favourite Meeting Between Hero and Heroine, Bride by Mistake by Anne Gracie for Favourite Love Scene, and Blood Kin by M. J. Scott for Favourite Cover.

The Bling Off tiara was passed on by outgoing Queen of Bling, Melissa Craig (Tracey O’Hara, who tied for the prize last year, was unable to attend), to Melissa, whose outfit included a hand-beaded overdress and bra, home-made fascinator, and dazzling shoes. Apparently, she took about a week to bling-ify her outfit. Our very own Allison (Decadence) and Nas won the runner-up prizes. Kate Cuthbert and I selected the prize winners based on a variety of factors, all of which were completely subjective.

* Note: Awards presented in 2010 were for the previous year’s books