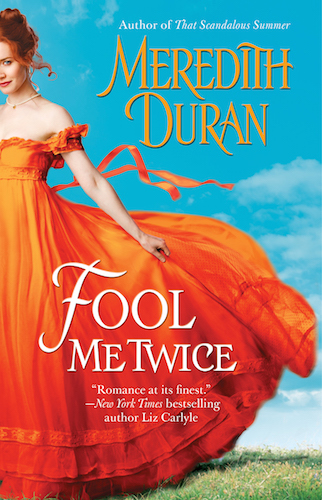 Congratulations to this year’s RITA and Golden Heart winners!

The romance equivalent of the Oscars was held yesterday at the Romance Writers of America conference in New York. This year, the event was live-streamed on the RWA website — from a reader’s perspective, this was such a fabulous idea. I can imagine that authors who couldn’t attend also enjoyed seeing colleagues being recognised for their work.

Alas, there were  no Aussie winners this year, but two of my favourite historical romance authors won the top prize.

Congratulations to all the winners! You can find the official list here. Fool Me Twice by Meredith Duran

A LADY WITH A SECRET

Running for her life, exhausted and out of options, Olivia Holladay wants nothing more than the chance to make a home for herself. So when she realizes that the infamous Duke of Marwick might hold the key to her freedom, she boldly disguises herself as the newest and bravest in a long line of the duke’s notoriously temperamental housekeepers. Little does she know that the wickedly handsome Alastair de Grey has very different plans for her.

A MAN WITH A PASSION — FOR VENGEANCE

As his new employee, Olivia is a fearless upstart. As a woman, the daring redhead is just what Alastair needs to rouse him from darkness to the siren call of revenge. He has suffered a betrayal so deep that he will use whatever means necessary to destroy his enemies—even his brazen and beautiful domestic. But his vengeful plan fails to account for his single weakness: an irresistible and growing passion for the enigmatic Olivia. Romancing The Duke by Tessa Dare

As the daughter of a famed author, Isolde Ophelia Goodnight grew up on tales of brave knights and fair maidens. She never doubted romance would be in her future, too. The storybooks offered endless possibilities.

And as she grew older, Izzy crossed them off. One by one by one.

Ugly duckling turned swan?
Abducted by handsome highwayman?
Rescued from drudgery by charming prince?
No, no, and… Heh.

Now Izzy’s given up yearning for romance. She’ll settle for a roof over her head. What fairy tales are left over for an impoverished twenty-six year-old woman who’s never even been kissed? Baby, It’s You by Jane Graves

With only the wedding dress on her back and her honeymoon luggage in the car, Kari Worthington is running away. Determined to put her controlling father, her rigidly structured life, and the uptight groom she left at the altar in her rearview mirror, she escapes to the Texas Hill country…and lands on a tall, dark, and gorgeous winery owner’s doorstep. All she needs is a job and a place to live until she can get back on her feet. So why is she fantasizing about losing herself in his powerful arms?

For Marc Cordero, freedom is so close he can taste it. He’s devoted his life to managing the family business and being a single dad. Now with his daughter away at college and his brother taking over the winery, Marc is ready to hop on his Harley for parts unknown — until a runaway bride bursts onto the scene. Free-spirited and tantalizingly sexy, Kari excites him like no other woman has before. But when irresistible passion turns into something more, will Marc give up his future to take a chance on love? One In A Million by Jill Shalvis

As the brains behind wedding site TyingTheKnot.com, Callie sees it all: from the ring to the dress, the smiles…to the tears. It’s that last part that keeps her single and not looking. Getting left at the altar will do that to a girl. But when Callie returns to her old hometown, she finds that her sweet high school crush is sexier than ever. And he makes it hard to remember why she’s sworn off love…

Tanner is a deep-sea diver with a wild, adrenaline-junkie past-and now his teenage son is back in his life. How can Tanner be a role model when he’s still paying for his own mistakes? It’s hard enough that gorgeous Callie has appeared in town like a beautiful dream, challenging his best-laid plans to keep his heart on lockdown. Though there’s something about being around her again that makes him feel like he can be the man she-and his son-deserve. Little Lucky Harbor holds their past; can it hold a beautiful new future? Trey Waterston has been on the outside looking in for so long he nearly forgot where home is. But when he has to go back to the ranch that is his Texas birthright, he expects it to be as difficult to navigate as everything else in his life. He does not expect to find a halfhearted search afoot for a missing heiress. Beautiful and innocent Rebecca Cargill has disappeared, and nightfall — and a snowstorm — is coming. If they don’t find her, she could die.

Not on my watch. Instinctively, and directed only by a photograph, Trey knows he is the only one who can help her. Maybe he can finally claim his legacy. But why is he suddenly so sure Rebecca is a part of it? A grieving mother. A mysterious child. And a dedicated PI who’s determined to solve the puzzle.

For three years, Kate Marshall has been mourning the loss of her husband and four-year-old son in a boating accident. But when she spots a familiar-looking child on a mall escalator, she’s convinced it’s her son. With police skeptical of her story, she turns to private investigator Connor Sullivan for help. As the former Secret Service agent digs into the case, the boating “accident” begins to look increasingly suspicious. But if Kate’s son is alive, someone is intent on keeping him hidden–and may go to lethal lengths to protect a sinister secret. Once the night comes…

Will Thorne is living a nightmare, his sanity slowly being drained away by a force he can’t control. His talents have made him the perfect assassin for hire. But as he loses his grip on reality, there is no calming him — until he finds his next target: the mysterious Holly Evernight.

Love must cast aside the shadows

Holly cannot fathom who would put a contract on her life, yet the moment she touches Will, the connection between them is elemental, undeniable-and she’s the only one who can tame his bouts of madness. But other assassins are coming for Holly. Will must transform from killer to protector and find the man who wants Holly dead…or his only chance for redemption will be lost. Concealed In Death by JD Robb

Leading the demolition of a long-empty New York building that once housed a makeshift shelter for troubled teenagers, Lieutenant Eve Dallas’s husband uncovers two skeletons wrapped in plastic. And by the time Eve’s done with the crime scene, there are twelve murders to be solved.

The victims are all young girls. A tattooed tough girl who dealt in illegal drugs. The runaway daughter of a pair of well-to-do doctors. They all had their stories. And they all lost their chance for a better life.

Then Eve discovers a connection between the victims and someone she knows. And she grows even more determined to reveal the secrets of the place that was called The Sanctuary—and the evil concealed in one human heart. The Saint by Tiffany Reisz

Rebellious, green-eyed Eleanor never met a rule she didn’t want to break. She’s sick of her mother’s zealotry and the confines of Catholic school, and declares she’ll never go to church again. But her first glimpse of beautiful, magnetic Father Marcus Stearns — Søren to her and only her — and his lust-worthy Italian motorcycle is an epiphany. Eleanor is consumed—yet even she knows being in love with a priest can’t be right.

But when one desperate mistake nearly costs Eleanor everything, it is Søren who steps in to save her. When she vows to repay him with complete obedience, a whole world opens before her as he reveals to her his deepest secrets that will change everything.

Danger can be managed — pain, welcomed. Everything is about to begin. His Road Home by Anna Richland

Special Forces medic Rey Cruz needs to find a fiancée, fast, or he’ll end up in a marriage orchestrated by an Afghan warlord. Finding a picture online of a girl he barely knew back home, he fakes an engagement photo, thinking no one else will see it. But when Rey loses both legs and the ability to speak while rescuing a local boy, the image goes viral.

Seattle marine biologist Grace Kim is shocked to find out she’s engaged. When she’s offered a plane ticket to visit her “fiancé,” she takes it, looking for the answer to one question: Why did he lie? Touched by Rey’s funny texts and the determination she sees in him, Grace offers her friendship — a big step for someone who prefers whales to most company.

And when Rey is finally sent home, Grace agrees to help him drive his classic car cross-country over Thanksgiving — a once-in-a-lifetime road trip that leads to what feels like real love. In front of his friends and family, she plays the caring fiancée, but what place will Grace have in Rey’s new life once he’s ready to be on his own again? Nate Everets’ life was all about acoustic guitar, girls in short shorts and hot Southern nights.

Now Nate has a best friend that might never wake up, a summer of community service, and enough guilt to drown in. Monroe has a family that’s falling apart, a summer banishment to her grandma’s, and a choking grief that makes it hard to breathe.

Captivating and hopeful, this achingly poignant novel brings together two lost souls struggling with grief and guilt — looking for acceptance, so they can find forgiveness. Run To You by Clara Kensie

Sarah Spencer has a secret: her real name is Tessa Carson, and to stay alive, she can tell no one the truth about her psychically gifted family and the danger they are running from. As the new girl in the latest of countless schools, she also runs from her attraction to Tristan Walker—after all, she can’t even tell him her real name. But Tristan won’t be put off by a few secrets. Not even dangerous ones that might rip Tessa from his arms before they even kiss…

RUN TO YOU is Tessa and Tristan’s saga—two books about psychic gifts, secret lives and dangerous loves. Each book is told in three parts: a total of six shattering reads that will stay with you long after the last page.

Romantic Suspense — A Shot Worth Taking by Tracy Poole

Short Contemporary Romance — Winning Her Over by Alexa Rowan

Young Adult Romance — When I Wake by Stephanie Winkelhake