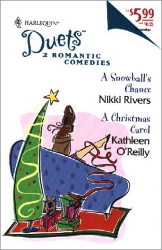 This humorous, sexy friends-to-lovers romantic comedy is an excellent debut in category romance.

I love the friends-to-lovers theme in romance, especially in category novels. During my deepest Mills & Boon addiction, this was my absolute favourite type of couple. Probably it was because I was in high school at the time.

Unlike your typical friends-to-lovers pairing, the couple in Kathleen O’Reilly’s first category romance don’t suffer from a lust imbalance (where one person has always harboured a secret crush on the other). Carol Martin has been best friends with Mike Fitzgerald since they were kids. Strictly platonic. She’s looking for someone more sophisticated; he’s not willing to risk the wrath of her mother by so much as thinking inappropriate thoughts.

But all it takes are some suggestive comments from Carol’s Aunt Eleanor to get those thoughts going. And once lust gets in the way of their friendship, Carol and Mike have to sort out what they’re willing to live with … and whom they can live without.

‘I can see ideas running through your head right now.’

Mike swallowed four times before replying, ‘No ideas, Eleanor. None at all.’

A misguided fantasy began to take root in places it had no business being, and he stood up to leave. Having a testosterone moment over a girl he had known since second grade was not the smartest thing he’d ever done.

Readers who discovered O’Reilly through one of her Blaze books, may be surprised to learn that she has quite a flair for romantic comedies. In comparison to O’Reilly’s later work, this book has a bit more exposition and the dialogue sometimes lacks the brevity of her Blazes. The humour is much more understated in her later work, but the sexual tension is pure O’Reilly: ‘It was a kiss meant for seduction, and there wasn’t a body part on her that wasn’t seduced.’

The conflicts between Mike and Carol can feel contrived—it culminates in a big misunderstanding—but who cares when Mike is such a loveable and sexy hero. When he finally decides to pursue Carol, he refuses to settle for less than love.

Aunt Eleanor provides an over-the-top but oh, so endearing foil for Mike’s scruples. When he insists that he and Carol are just friend she reminds him that he’s seen her naked fifteen times and urges him to ‘Think what the sixteenth time will be like.’

The title is a loose reference to Carol and Mike being volunteered by Aunt Eleanor to organise the Christmas pageant for the old people’s home she lives in. The book has twelve chapters, each of which is prefaced by a play on The Twelve Days of Christmas.

This is a humorous, sexy friends-to-lovers story with an adorable hero. It lacks the subtlety and drama of O’Reilly’s more recent work, but it’s still a great read and an excellent debut in category romance.