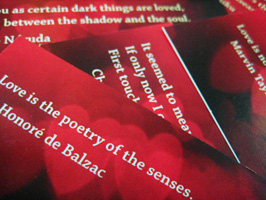 A couple of months ago, The Wheeler Centre hosted an event called A Week of Love and Lust. One of the sessions featured best-selling Australian romance author Stephanie Laurens. Here are some highlights, thanks to Jen from Evening Hour.

I was really excited when I heard about The Wheeler Centre devoting a week to Love and Lust. As an avid romance reader, and as a staunch advocate of the kitschier side to popular culture (wait, isn’t all popular culture kitsch when you get down to it?), A Fine Romance was an opportunity I simply could not pass up. And with a subheading like ‘Beyond the Bodice Ripper’, you know it’s going to be enlightening, to say the least.

Alan Brough was a great presenter, bringing an inquisitive lightness and seriousness to an often sullied subject, humbly adding that ‘if I screw something up, speak up!’ Joined by Harlequin Mills & Boon writer, Marion Lennox, historical romance writer Stephanie Laurens and young adult fiction writer, Lili Wilkinson, the romance and popular fiction genre was well represented.

A bodice ripper does not romance make!

Alan started off by admitting he once aligned romances to ‘bodice rippers’ which he then conceded was ‘very, very wrong’. So what is a bodice ripper, then? Stephanie enlightened us: to describe a bodice ripper is to refer to a particular era between 1976 – 1980, with a very particular plot. Basically:

This seems to be the very formula that romance follows today, but the bodice ripper had specific attributes, that being the hero was always a man in power/authority, and the heroine was terribly young and naive, a ‘silly, little girl’. The term ‘TSTL’ (Too Stupid To Live—sad, but true) popped up; those more finely tuned to net-lingo would’ve picked up on it. Said heroine would inevitably be ‘grabbed’ or kidnapped, usually subjected to harsh conditions, and be raped by said hero, perhaps multiple times, and would occasionally even be passed around among other men. By some divine intervention, the girl would suddenly develop a backbone, transform into a plucky heroine and the hero would thus be miraculously in love with her.

It all sounds so silly now. But how to explain the prevalence of a ridiculous plot? Apparently there was no market for historical romance at that time (a stark contrast to the contemporary statistic of over 2,000 novels churning out per year in the USA alone, and no doubt rising). I shudder to imagine the scope of reading I could have had back then. I would have liked to have seen more discussion about this but by then the topic had moved on.

Marion Lennox described immersing herself in the worlds of the historical writers Catherine Gaskin, Georgette Heyer, Victoria Holt and May Stuart. Stephanie also counts Heyer as a favourite, especially the humour: ‘it’s got everything’. Stephanie emphasised that romance should be fun—as should real life love, added Alan.

So what inspired these ladies to write romance? Marion wryly answered, ‘I did it for a bet’. (I have to say I’ve heard this one quite a lot among writers!) Marion describes writing her first book: ‘I sent it to London and they sent a cheque back’ and it became ‘addictive’. Stephanie was motivated simply because she ran out of books to read and was annoyed with the lack of historical romance at the time. Kind of funny to imagine that now; there’s simply too much choice today!

Give the people what they want

Marion spoke about establishing immediate empathy for the heroine, who has to be warm and empathic. If you’ve got those nailed then the romance and the story is yours in the first ten pages.

Alan asked, ‘Do the characters mirror their authors’ inner selves?’ Stephanie explained she once attempted to write a younger heroine, but the character drove her nuts. It was a disaster, and she now primarily sticks to heroines in their mid-20s. Lili, who writes stories about young people, highlighted that what teenagers want isn’t so different to what adults want in life, but she admits to listening to the language of teens today. Some Twilight jibes ensued. I can’t remember now, but you know it can’t be that flattering.

Alan moved on to the romance genre as a sign of empowered females, which was an interesting perspective. Stephanie discussed ‘genre fiction’ which is essentially written for entertainment. It is a matter of giving the people what they want. The audiences lead the authors along, paving the way for transitions between subject matter and writing styles within authors’ works. Marion highlighted the universal need in women for a good romance, quoting a Nora Roberts line about the reader identifying with the couple and their relationship, and the need for antagonism. Lili pointed out that we have to love both characters, but ultimately each character has to initiate change to reach a mutual respect and love for each other.

There’s a euphoria in letting the imagination go. Marian talked about creating characters that made her look back and think, Now where did that come from? Stephanie agreed, adding that it’s a process of organic writing. Romance is about the ‘promise’, that guaranteed happily ever after, which is pretty special. It’s not easy, though—it’s a ‘discipline’ and it’s often very tempting to ‘kill the characters’. The beauty of the story is in the journey and not so much the ending.

Fabio has a lot to answer for.

Now we couldn’t discuss romance novels and NOT have the infamous book covers and Fabio mentioned at some point. Alan joked, ‘I’ve never seen that many men in blouses!’

(I have a high tolerance when it comes to ‘bad taste’ but even I draw the line at Fabio.)

Alan said he blushed reading a sex scene from one of Stephanie’s novels. ‘It was sexy and extraordinary!’ Giggles and snickers over ‘mighty throbbing parts’ inevitably ensued. Stephanie emphasised that the sex scene must have purpose, and it must be carried by the emotion. It’s a love scene, not a sex scene; it’s a scene of non-verbal communication, so its description has to be carefully considered. Stephanie aligns the construction of a love scene to choreography. You literally work out the movements (that way you can cancel the physically impossible positions!). Off-hand a Christina Dodd cover was mentioned for apparently including one too many limbs. Readers are very perceptive and aware of such mistakes.

Alan prompted that romance subverts preconceived ideas of female sexuality—the bodice ripper tag was an ‘appalling hiccup’. And why is it such a guilty pleasure? Stephanie essentially argued that surely we’ve moved on from patriarchal values (I don’t know where Stephanie’s been, but that’s highly arguable), but more convincingly Lili highlighted the binary stigma attached to women: you can either be labelled a prude or a slut. The current wave of obsession over vampirism further perpetuates this regressiveness. ‘Men who fly without wings are not to be trusted!’

So what’s it like at a dinner party? They either back away, or question you about earnings, Marion responded. Or worse yet, you get people telling you about their sex lives in vivid detail. Now that would be a good bar story to share.

On research. Stephanie quipped, ‘That’s why my husband has a smile on his face!’ She also mentioned travel agents enquiring after her fictional locales to take tourists on guided tours. Methinks someone didn’t do their own research.

For Marion preparation is from life, while Stephanie is more methodical in her process. She writes character studies and data sheets, since she knows how pedantic readers get about eye colours and whatnot.

On the lack of romances featuring older couples. Women prefer younger bodies (no shock there). Stephanie concedes that ideal heroes are repetitive. And so it would be, given how popularity and fads are cyclical.

On the love of violent alpha heroes. There’s just no judging taste? This was only lightly touched on. I got the inkling the panel didn’t particularly want to talk about it, but maybe it’s just me…

On the continued negative perception of Mills and Boon from a wider stance. (This was asked by a curious character; she reminded me of some well-off society figure straight out of the stereotype bible). The truth is, there is a very healthy readership in Australia, but unfortunately the statistics are unrecorded, ergo remain under the radar, which is sad. Marion touched on the ‘cultural cringe’ in Australia. Now here was what I was waiting for; I’d really hoped there’d be some discourse on the supposed vulgarity that is reading romance. I find myself asking the same questions in my Honours thesis. Why are love and sentimentality constantly ridiculed as dirty and shameful?

I am a graphic designer. For my third year portfolio I redesigned Rendezvous Books’s identity (hypothetically) but I was apprehensive about the reception I would get from peers and lecturers (I did notice snickers and incredulity when I presented my ideas). In a design context, and indeed a broader social and political context, there still seems to be a particular bias towards masculine views. Perhaps we are still slaves to the patriarchy, but romance is at least a proactive way for women to defy the existing framework—these are, after all, stories written by women for women. They are fun, escapist and promise a wonderful experience and provide pleasure to people.

Lili criticised literary prizes for privileging stories about men. I myself don’t pay too much attention to book awards and the like; I suppose personally they seem pretentious and contradictory on the one hand, but on the other they are powerful communicators—they send messages about the issues and people that contemporary society is concerned with. They may celebrate or denigrate. In my own research, I’ve noticed that literature tends to connote a male voice, the way popular/genre fiction does a woman’s. And whatever that is feminine is weak and superficial—domesticated, even. But that’s another argument.

Romance readership among men in the USA is roughly 20% male, Stephanie added. This was a startling (albeit also comforting) figure. Last I read/heard, it was merely a dismal 1% in Australia (please correct me if I am wrong but this figure sounds about right).

This seminar was a great introduction into questions and curiosities about the romance genre today. I found my views echoed much of Lili’s (she won me over with her anti-Twilight stance). I would have liked to have seen more discussion about the preconceived notions of romance and romance as bad taste—mind you, I was thinking of my Honours project (shameless self-promotion). Granted, one hour of discussion barely touches the surface of a multi-faceted, typically vilified but dearly loved part of literature and popular culture, so at least all avenues were covered if only skirted over. I only hope there will be future events like this to further open up dialogue between the philistines and preachers, to put it crudely!

Jen is a graphic designer from Melbourne who is spending a year celebrating kitsch and excess for Honours. She’s also an artist, typophile, bookworm, writer and pop culture aficionado. You can read more of her writing at Evening Hour.