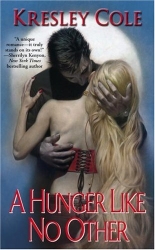 There are some books that you re-read and remember and, as you begin again, wonder why you read it. This is one of them. While I love the Immortals After Dark series dearly, I remember only starting it because I had heard wonderful things about book 3 and I had to get there. So I started it. I’m glad A Hunger Like No Other was not my first Kresley Cole book—I had read her historicals before—or else I might have gone, Whut? and hurled the damn thing.

Lachlan, leader of the Lykae Clan, has been imprisoned for 200 years. While chained underground he scents his mate, manages to find the strength to bust free, and goes off to find her. Emmaline is half vampire, half Valkyrie and about as innocent as Britney Spears would have liked you to believe she was when she still sang Sometimes I run, sometimes I hide… Anyway, he semi convinces, seduces, abducts, you can call it anything, her and tries to get her to Scotland before the full moon.

What I liked: The world building and the riotous adventure,  constantly wondering what would happen and what Cole would decide to unfurl next. While it starts out as a battle between a semi-deranged Lykae and an innocent virgin, it eventually becomes much more than that, and when the plot evolves it truly takes you on a ride.

What I didn’t like: The pacing, first and foremost. I could have done without the first few chapters of attempted sex, and I felt they could have been used to set up the story better. Also, you have no idea how many times I wanted to hit both characters on the head. As well as the secondary ones, who are much more competent and put together in the next books that they seem almost out of character here.

This book is the start of an excellent series that I would highly recommend. As with any series there are some books that are better than others, and if you can survive wanting to smack the protagonists on occasion, you will find a promising start to a well thought out world and a fun adventure to go along with it. You can read an excerpt here.

This review is part of the Re-read Challenge. Click here for more details.