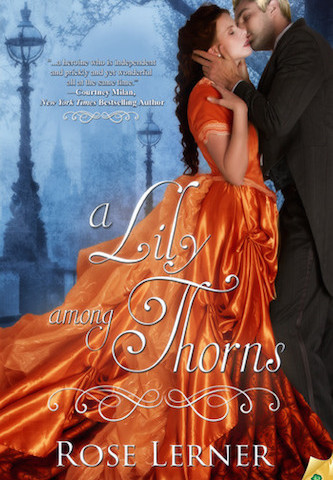 Everyone absolutely ought to read this book. I’m deadly serious. Rose Lerner has found a way to blend some very complex ideas into her storytelling and everyone needs to experience it. Right now.

I have two things to be thankful to Rose Lerner for. The first is that last year her tweets inspired me to finally watch Miss Fisher’s Murder Mysteries and now I have a new TV show to obsess over. The second is that she wrote A Lily Among Thorns, and by god did I need this book in my life.

A former courtesan and now innkeeper, our heroine Lady Serena Ravenshaw is prickly, defensive, and a deadly adversary to have. Basically, she’s the anti-heroine of my dreams. So when Solomon Hathaway needs to track down a stolen family heirloom, he comes to Serena for help. After all, she knows every criminal in London by their first name.

Serena agrees to help Solomon, largely because she recognises him as a former almost-client who gave her the means to regain her independence, and she hates the idea of being in his debt. Even if he doesn’t recognise her now.

Naturally, Solomon is a beta hero. He’s a tailor, a Jacobite, and deeply grieving the death of his twin brother. He’s drawn to Serena even (or perhaps especially) when she teases him or treats him with disdain, because he understands the value of her masks. Especially the ones she won’t admit to wearing.

All this boils down to Serena and Solomon ‘not-flirting’ with each other constantly and basically building the most delicious romantic tension possible, and causing me to make happy book noises constantly.

There’s also a secondary romance involving Serena’s former business partner, Sacreval, which is equally wonderful, even if it largely takes place off the page or on the edge of the action. But as it’s also deeply entangled with the spy/mystery part of the plot. (Oh, sorry, did I not mention that this is a historical spy romance?) I don’t trust myself to delve into it lest I reveal spoilers. But if you’ve already read A Lily Among Thorns and you’ve ever wondered why this romance doesn’t have a WHOLE book of its own, Lerner actually wrote (briefly) about this on her blog here. You might find her post brings you some closure.

But really, I think the most wonderful aspect of A Lily Among Thorns is something a little more subtle. Lerner could easily have written Solomon to be an affable tailor who likes the sharp-edged Serena, and that would have been fine and lovely. Hell, I’d have read it and smiled and told people how wonderful and lovely the book was, and you’d all agree, and life would be grand. But Lerner, not content to just write a wonderful book, took everything, especially Solomon, a step further.

More than once, Solomon is forced to confront his own privilege as a straight white man. I mean, don’t get me wrong, Solomon’s intentions are always good. He’s doesn’t go around throwing people’s choices in their faces, and he genuinely tries to do the Right Thing. So left unexamined, I think a lot of people wouldn’t even question his behaviour. To be honest, I didn’t question his behaviour at first. But as other characters, like Serena, force Solomon to consider the root of his beliefs and actions, or the way those beliefs and actions affect others, his societal privilege really becomes apparent. And thankfully, Solomon puts on his Big Boy Pants and begins to change, without demanding a cookie for being a Decent Human Being.

That said, A Lily Among Thorns is not an ‘issue’ novel. Lerner has blended Queer Theory and Feminism with her prose so elegantly that non-critical readers might not notice how utterly subversive the inclusion really is. And that’s fucking powerful.

So yeah. I needed this book in my life. And you probably do, too.

Content advisory: Your heart will actually break, but it’s okay, because Lerner will rebuild it. Stronger. Also, if you don’t read this book, your life will be sad, and you’ll be cursed with seventeen years of bad luck, and your crush will never love you back, and you will lose the left shoe of your favourite pair of shoes. Probably.

You can find an extract of the book here. Reissue published by Samhain. I think it was originally released by Dorchester, but it’s now with Samhain and has a pretty, new cover. And Solomon’s sister’s name was changed in the reissue, but not much else.