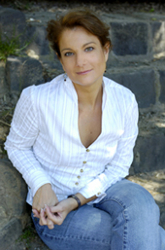 Christine Darcas is a freelance writer, novelist and Dancesport competitor. She is also the reigning Queen of Bling after blowing the competition away with her gorgeous ballroom dancing gown at the ARR Awards last month.

Christine has written two novels, Dancing Backwards in High Heels and Spinning Out, both of which draw on her experiences as a dancer.

BOOK GIVEAWAY: Christine is giving away a copy each of DANCING BACKWARDS IN HEELS and SPINNING OUT. For a chance to win, tell us what style of dance you find most romantic and why.

Some rules: Post your answer as a comment to this post. Multiple entries are fine. By entering, you give us permission to quote your entry in future blog posts and articles. The winner will receive one each of the titles listed above. Overseas readers are welcome to join in. The giveaway ends midnight on Saturday, April 23 AEST. Wandergurl, Decadence and I will pick our favourite answer. The winner must confirm their email address within one week after we announce the result on the blog.

Over breakfast at the Carpark Café in Camberwell, Victoria. It’s very weird, but I get into the creative zone there even when mums are nearby fussing with crying babies.

My cat. She sleeps in my inbox.

A cup of tea and a buttered crumpet.

Get naked. I thought about it for a minute when I was considering how to research a character who turned out to be a gigolo … but only for a minute. Okay, maybe two minutes.

Reasonably calm, but I don’t work to as tight a deadline as other writers I know.

Actually, there was an autobiographical touch to the title of my first book—Dancing Backwards in High Heels. A lot of women do it, but that doesn’t make it easy. It would be shelved in women’s commercial fiction.

Ozma of Oz by Frank L. Baum. She was so exotic and pretty and smart. I wanted to be her.

She closed her eyes and inhaled deeply, determined to contain her sensitive nature. Too often, it took them by surprise. With her wise cracks and boisterous laughter, they expected her to be bold. But boldness often fought her.

Surrender. Become one. It will put an end to any body issues you might have.

Rarely—only when I worry that a character I really like might be killed off. That way I can brace myself!

Ginny is not sure what she wants….New York or Melbourne? Career or love? Ginny and Barb might be mother and daughter but as far as Ginny is concerned they are very different.

At thirty-three, Ginny has her own apartment in New York, a prestigious job in an advertising agency and an on-again/off-again romance with Simon. Ginny sees herself as a realist and resents her mother for allowing her to dream big as a child.

Things might have worked out … until Simon cheated on her, her boss fired her and emotionally burnt out Ginny decides to take a break. She doesn’t consider crossing the globe to visit a friend in Australia for three months running away. But then she meets Lachlan and is forced to choose between career or love, New York or Melbourne. Her mother and best friend have their opinions about what she should do but Ginny is determined to make her own way … not realising that everything she does is shaped by her lifelong insecurities.

As part of Aussie Author Month, we’re running a series of Q&A-type posts featuring authors who write romance fiction or fiction with romantic elements. Each post will feature the same set of questions or prompts. We tried to make them fun and easy for the authors—and we hope you enjoy them, too!