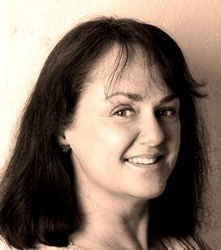 Phillipa Fioretti’s debut novel, The Book of Love, centres around a rare book of ancient Roman erotica. It’s a book that makes good use of Fioretti’s background in the arts. Phillipa has studied archaeology, sculpture and museum studies, and has taught drawing and media studies. Her second book, The Fragment of Dreams, continues the story of Lily and William, the couple from The Book of Love.

If you’re wondering whether or not her books have a happy ending, you can take heart from a Courier Mail interview in which Phillipa says, ‘I don’t want to write things that depress me. I don’t want to be in a dark headspace all day. I like to have a laugh while I’m doing it.’

BOOK GIVEAWAY: Phillipa is giving away a copy of THE FRAGMENT OF DREAMS. For a chance to win, tell us what fragment from history you’d like to own and why.

Some rules: Post your answer as a comment to this post. Multiple entries are fine. By entering, you give us permission to quote your entry in future blog posts and articles. Open to Australian readers only this time. The giveaway ends midnight on Sunday, June 26 AEST. Wandergurl, Decadence and I will pick our favourite answer. The winner must provide a delivery address within one week after we announce the result on the blog.

At my desk in front of my PC

Once I bought a book because I loved the cover but I was disappointed with the story so I cut the picture off the cover and stuck it on the shelf above my computer. It’s a sepia photo of an Inuit woman. She’s my writing pal.

A cup of tea and perhaps some chocolate

Hurt or be rude to someone

We use the term ‘brain fever’ in my home when you are hyper-stimulated by work. I would be described as dangerously feverish or in danger of unexplained self-immolation.

A 1938 edition of a book titled The Myths of Greece and Rome by H. A. Guerber. My childhood favourite.

Phillipa was not beautiful, yet she possessed a sense of humour and a self deprecating wit that made her the most delightful companion. She was, however, in want of a fortune, a situation Phillipa found so vexing that she became a lady novelist. And it was at a book signing that I first met her—her green eyes sparkling in the fluorescent lighting, a suggestion of panic flitting across her face as she struggled to remember the date.  She smiled that lopsided yet charming smile of hers and said to me, ‘How do you spell Adam?’ At that moment I knew I had to have her.

I’m not sure I’d want to survive such an event. I mean, say zombies won and were in charge of the world, they’d be pretty boring to talk to, and if they’re the sort of zombie that sheds decaying flesh everywhere, I’d have to say no to survival.

It’s a tie between staring out the window or Twitter/Facebook.

Never—I kill people who tell me the ending.

THE FRAGMENT OF DREAMS (Series, Book #) Lily has found love and her life should be rosy, but discovering an uncle and cousin she never knew she had could throw her beloved William behind bars and leave Lily on her own with only Otto, the dog, for company in her turmoil.

Lily and William, who discovered love in The Book Of Love are planning their new life together in Rome when Poppy, Lily’s big sister, announces that she’s found an uncle and cousin they d never heard of before. Their joy at meeting their new family comes crashing down when their double-crossing cousin Andy accuses William of stealing and attempted murder. A valuable fragment from a Roman frieze has been stolen from Andy’s father and Andy is pointing the finger at William, while also trying to woo his cousin Lily. He’s a bad piece of work and Lily has to act quickly to save William, retrieve the fragment and bring Andy to justice.

An urgent flight to Italy, some smart work in Andy’s hotel room and quick thinking on a dark night on the Amalfi coast might just be enough to right the wrongs, or see Lily become the next victim in the crazy web woven by Andy’s addled mind.

This is part of a series of Q&A-type posts featuring authors who write romance fiction or fiction with romantic elements. Each post will feature the same set of questions or prompts. We tried to make them fun and easy for the authors—and we hope you enjoy them, too!