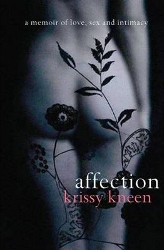 Review of: Affection: a memoir of love, sex and intimacy In Affection, Krissy Kneen intersperses past and present in brief but intense vignettes that readers of her blog, Furious Vaginas, may recognise. And yet the story flows—and does so lyrically, beautifully and at times enigmatically.

It begins with a playful tease—Kneen is bound, at her own request, in the middle of an otherwise perfectly domestic Sunday morning. ‘And that was just the sex part,’ she breaks off cheekily.

Kneen describes her childhood in Blacktown (NSW) and her teen years in Gladstone (Qld) almost always framed against the discovery of sexual pleasure—lying on the carpet, in a crawl space under the house, under her grandfather’s desk, on the beach—and her memories burst with texture.

Affection is, at times, almost unbearably honest. And yet Kneen’s lyricism dulls the edge off some of the darkest parts of the book: depression, attempted suicide, homelessness. Worst is the emotional cruelty Kneen endures at the hands of careless lovers and friends. It’s not that these events are less shocking when they happen; it’s that Kneen introduces them so gently that we’re smack in the middle of these bleaker memories before we realise where she’s taken us.

The scenes set in the present anchor Kneen’s recollections. Underlying the sex parts are Kneen’s struggle to reconcile her inherently sexual nature with loving relationships that must remain platonic:

…the slow torture of my abstinence, squirming with the fleeting possibility of other entanglements, struggling to contain the force of my love for one friend after another.

[In another vignette, this time speaking with a therapist:]

‘And then I sexualise everybody. I think about sleeping with them. There’s this thing I do where I pick someone as my friend and then I fall in love with them.’ To date, however, I have not acted on any of these desires. They are all unrequited longings…

and her journey to self-acceptance. That she’s a dynamic, indefatigable sexual being doesn’t make her any less vulnerable to the insecurities of someone who recognises she’ll never approach the mainstream image of a beautiful, sexy woman that even she buys into: ‘I feel like a drag queen, strutting a rampant sexuality that is just an overblown façade.’

What doesn’t come across so clearly is how Kneen goes from sexual hedonism to marriage. Scenes featuring her husband are sweet and deeply romantic—they’re some of my favourite moments in the book:

‘Anthony, then. I am not heterosexual or monogamous.’

He nodded. ‘I understand, but you will be while you are with me.’

He kissed me then, and it was nice. Kissing wasn’t a thing I prided myself on, but there was a tenderness behind this kiss and I drank it down. I felt like coffee and a cigarette but a kiss would do. We were disturbed by the judder of the window being opened again and another man, another neighbour, spidered his way over the sill.

‘Oh,’ he said, but he tiptoed into the room regardless, reached for a guitar that was resting against a wall, nodded, waved and scrambled out through the window once more, all jangly strings and echoing wood.

‘I’ve slept with him,’ I told my husband.

He kissed me. I liked it. I didn’t believe him then, but now, eighteen years later, I wonder how he knew.

But it’s never clear to me how Kneen remains true to herself through eighteen years of monogamy and ‘unrequited longings’.

A review copy of this book was generously provided by Text Publishing.