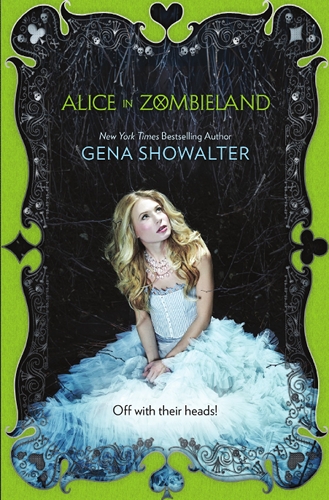 Review of: Alice in Zombieland In hindsight, when the the book’s introduction, ‘A Note From Alice’, failed to stir any reaction from me other than, Seriously?, I should have left it at that. But I wanted to give the book a fair go, because look at that cover and think of the possibilities of a zombiefied version of Alice’s Adventures in Wonderland.

But any link to Lewis Carroll’s original text is tenuous at best. I wouldn’t have cared if the title were a tongue-in-cheek reference to Carroll’s Alice and that was it, but the entire book seems geared towards exploiting this link: the title, the cover image, the tagline ‘Off with their heads!’, and the series name, The White Rabbit Chronicles. If you’re looking for the Mad Hatter and the Queen of Hearts, you’ll be sorely disappointed.

Alice Bell’s life changes the night she loses her family to a car accident in which she also witnesses her father being devoured by monsters. In hospital she befriends Kat, the embodiment of your typical tough and sarcastic best friend with a marshmallow centre in a teen novel. When Alice begins junior year (Is that the equivalent of year 11? I always forget) at a new high school, it’s fairly predictable that she finds Kat in the same school.

Anyway, it turns out that Kat’s ex-boyfriend—who you just know won’t be ex-ish for long—hangs out with a group of scary boys and girls, one of whom is Cole. The minute he and Alice make eye contact, Alice has staggeringly realistic visions of them together. Mostly they’re what would pass as wet dreams in a teen novel, but occasionally there’s a spot of portentous violence, too.

This is the point where most readers would have flashbacks to all the terrible teen urban fantasy romances they’ve recently read and put this book down. But I took one for the team, because despite everything else that annoys me about the book—and there’s a lot—author Gena Showalter writes teen lust deliciously well. That said, the actual romance leaves much to be desired—overbearing hero, uncertain heroine, love at first sight, jealous ex-girlfriend, cute rival for heroine’s affections.

To cut a tediously long plot short, Alice and Cole end up working together to fight not just the zombies but a group of humans who, instead of wanting to destroy the zombies, prefer to use them in scientific experiments. No points for guessing the big plot twist here, although I admit to being mildly surprised when the head of the baddie group was revealed. There are shades of Buffy the Vampire Slayer all over this book. It could be a coincidence, of course, but it’s enough to emphasise how much better Joss Whedon is at creating strong, warrior females, complex romantic subplots and a fascinating alternative reality.

The biggest weakness of the book is that the first person narrative never goes deeply enough. I felt no real sense of who Alice is, and her internal conflicts feel shallow and frustratingly unexplored. Showalter doesn’t give Alice the eloquence required to make this point of view work. I didn’t expect Alice to sound like an adult, but I wish she had more articulate things to say than ‘I wish…yeah, I wish.’ What’s worse is that the teen-speak sounds to me like an adult pretending to be a teen, including one or two churchy preachy stuff. In summary: Alice’s voice didn’t work for me.

It was therefore up to the plot to keep me engaged. Showalter partly succeeds, given that I skimmed the book to the end. This is mostly due to the aforementioned romance between Alice and Cole. Every time Showalter hit the right note in the love scenes—just kissing and mild groping, mind—it gave me hope for the romance if I could just ignore Cole’s arseholism. He brings to mind an overbearing Mills & Boon alpha hero, so readers who like this archetype and don’t mind seeing one in a teen novel might like him more than I did. But aside from that, the world building lacks detail and consistency. To quote Carroll: ‘they don’t seem to have any rules in particular’.

Which brings me back to the original Alice. Showalter makes some references to Carroll’s work: best friend Kat, a rabbit-shaped cloud that almost always spells doom, a recurring apparition, a party, a book that’s unintelligible to anyone but Alice. Except for the cloud, these references are fairly shallow and all they do is highlight the dissonance between what I expected the book to be and what I was actually reading.

In Carroll’s original work, the Cheshire Cat tells Alice that she’s sure to get somewhere, no matter which way she goes, if she walks long enough. I tried to apply the same principle by speed reading this book to the end. Unfortunately, it didn’t really go anywhere.

Alice in Zombieland never approaches the brilliance or charm of Lewis Carroll’s classic work. That I skimmed the book to the end despite the shambolic world building and dull characters just demonstrates what a romance tragic I am. In my teens, the make-out moments and a handful of genuinely touching moments between Alice and Cole would have been enough for me. As an adult, I fear it might injure the brain.

Who might not enjoy it: Readers expecting a modern twist to Lewis Carroll’s masterpiece