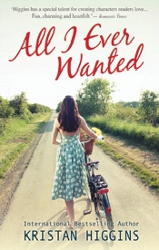 A surprisingly sweet and funny story with some solid and charming characters.

The Bridget Jones-style beginning of All I Ever Wanted almost caused me to put this book down, but I persevered because I’d been wanting to try Kristan Higgins for some time now. I’m glad I did because the story is surprisingly sweet and funny, with some solid character development.

Callie Grey has been pining for her boss—formerly her high school crush and first kiss—and patiently waiting for the ‘timing’ to be right for their relationship. But despite one glorious five-week fling almost a year ago, Mark announces his engagement to the daughter of a key client. On Callie’s birthday. Oh, and his fiancée would now be working with the company.

Sure, she wants Mark back, but Callie gamely tries to get back into the dating pool by checking out the town’s new vet…except Ian McFarland is not exactly receptive to Callie’s charms.

It’s hard to place this book. It has a chick-lit feel and is told from the first person, but the romance features heavily in the second half of the book. It’s also not as self-centred as chick-lit tends to be. Higgins plays for laughs, but never really at the expense of her protagonist. Behind Callie’s insecurities and problems is a fairly confident, successful woman with a clear sense of who she is, surrounded by people who love her.

Ian is a little more difficult to empathise with. Higgins had me until Callie makes an observation about Ian that brought to my mind a particularly irritating real-life acquaintance. That kind of ruined it for me. Romance genre purists might find Ian too inscrutable and inaccessible as a romantic hero—this isn’t helped by Higgins’s choice of POV.

The secondary characters demonstrated their own charm and provide a subtle way for Higgins to explore Callie’s strengths and weakness. I particularly loved Noah, Callie’s gruff but loveable grandfather, and Callie’s brother Fred. A subplot involving Callie’s parents suffers from being somewhat far-fetched and too conveniently wrapped up. Another romantic subplot involving Callie’s sister comes across as more than a little creepy and could have used a little restraint on Higgins’s part.

Similarly, the last part of the book could have used a lighter hand. Too many misunderstandings, including a conveniently compromising situation,  undermine an otherwise well-balanced story. Friction between Callie and Ian’s stepmother is introduced late, providing conflict between Ian and Callie which doesn’t feel properly resolved.

Still, what lingers in my mind after reading this book is Callie’s charm, Ian’s slightly bemused attraction to her and Noah’s rather endearing bluster.

Although Higgins starts off overdoing the wisecracks, once she settles into Callie’s voice the story becomes a gentle look at the many, often small ways that love in its various guises can blind, hurt, comfort and heal us.

A review copy of this book was generously provided by Mills and Boon Australia.