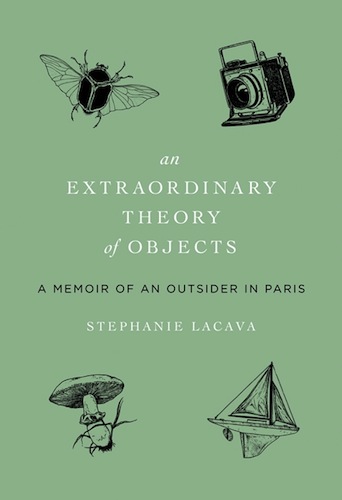 For people who have an appreciation for beauty, illustration and a touch of quirkiness. Just don’t get it as an ebook.

Also known as: how reading a book in the wrong format can completely change the effect.

I requested an e-galley of this book because I love memoirs, coming of age books and travelogues, and thought this was a perfect combination of all three. It certainly had all the elements and I wanted to like it, but in the end, the beauty and spirit of the book were ruined by reading it on a Kindle.

This memoir begins when Stephanie LaCava, in her early teens, moves to the outskirts of Paris because of her father’s work. Hers is a charming, well-off (and well styled!) American family growing up in the 90s, and I could easily relate because I grew up in the same era. I got all the musical references and even the 90s clothes. (Jelly shoes, OMG!) You could tell straight off that LaCava was an unusual child for that era, preferring solitude and collecting bugs and other things. Part of the way the story is told is through her childhood collection, and involves a lot of notes.

Kindles are not freaking designed for endnotes.

As much as I don’t mind supporting notes, and I love learning about things, I just ended up skipping about 95% of those in the book because they were presented as endnotes after each chapter, instead of footnotes, they were in tiny font and they totally interrupted the flow of the story. I could not remember what they were referencing anymore, so instead of being helpful they were rather annoying—so annoying I almost stopped reading.

I kind of regret getting this as a digital ARC because if I had seen this in a bookshop, as a hardcover, I would have gone for it. It’s the kind of book you can show people and say, Look at the lovely illustrations, it’s rather poetic, etc., but it’s all lost on a Kindle. Likely I would have gotten this anyway (or asked for someone to give it to me as a birthday gift), and having leafed through it I would have known that there were endnotes and not have bought the ebook!

The book description calls the book ‘a series of illustrated essays that unfolds in cinematic fashion’. When reading it on a Kindle, the book fails to unfold. Instead, it comes off a little disjointed, which is a shame, because there is a lot of emotion and reflection in it, which compelled me to continue. I just felt that it didn’t flow well. It was like a pre-empted coffee table book.

LaCava talks about her depression without really getting into too much detail of how she dealt with it. Her childhood in Paris touches on her dark moments, and how it affected her family, and while it is sad and emotional it never gets sad-sack-poor-little-rich-girl sad. There’s something very relatable about her, whether it’s in those darkest moments, or in remembering teenage angst, losing friends, or wanting solitude sometimes. Sometimes I wanted to give her a hug and say, Don’t worry Stephie, it’s gonna be ok. (I hope it is now, for her, and it seems like it is, more or less, when she talks about present day.)

This was a very quick read. I suspect there’s more spacing and bigger illustrations in real life. I would recommend this for people who have an appreciation for beauty and illustration with a little quirkiness. I also think in some parts you may have to remember a time in your life when you felt just a little bit alone, and found something to get yourself out of it. Just don’t get it as an ebook.

Who might not enjoy it: Anyone who bought it in digital format

A review copy of this book was generously provided by the publisher via Edelweiss.