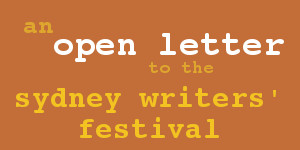 For a few years now, I’ve been eagerly scouring your program, looking for the right panel to suit my romantic heart. I’ve attended quite a few events and I’ve got to be honest — they were underwhelming. But don’t worry, my reasons aren’t without cause.

Last year, I experienced a frustrated rage like no other when a few friends and I braved the rain and storm to bundle into a gigantic warehouse where we sat at what was meant to be a romance panel on popular romance fiction.

What we got was a group of very talented authors who didn’t write romance. And didn’t really have any interest in talking about it.

What they had to say was interesting in its own right, but come on, I was there to talk about the romance. I wanted to listen to authors who were passionate about the genre, champions for this much maligned cluster of books that in no way deserves the constant derision and scorn it receives. These authors were so reluctant to even be labelled as romance authors that each of them insisted that they only wrote books with romantic elements — their books were much more than mere romance.

Now, as an avid reader of romance, to hear the genre oh so subtly dismissed was rage inducing. I sat, helpless, as minute after minute passed and we were pushed further and further away from the very idea of romance. I’m not sure what the other audience members were feeling, but my friends and I were fuming. It was like walking into a secondhand bookstore only to find out that they don’t sell romance novels (which happens quite often but it just means that I don’t go to those places because they have poor taste). When Kat asked a question about Mills and Boon, the panel members were kind enough to explain the difference between category and single title romance. To a romance reader.

So, as a romance reader, let me tell you what I know about the genre.

According to our good friend Wikipedia, over 20% of all fiction books in the UK are romance. In North America, romance generated sales of $1.438 billion and the books continue to top bestselling lists in New York Times, USA Today and Publisher’s Weekly. And directly from the Business of Consumer Book Publishing in 2013, it stated that romance fiction was the largest share of the US consumer market in 2012 at 16.7%. Our very own Marion Lennox — Mills and Boon author extraordinaire — has sold over 20 millions books worldwide. She’s not the only one either. Take a look at Stephanie Laurens’s sales.  I’ll give you a moment.

Then we have the phenomenon of rural romance. Started by Rachel Treasure and carried on by countless authors, almost all rural romances were selling upwards of ten thousand copies — according to the Sydney Morning Herald, most Australian novelists can expect to sell around five to seven thousand. And I’m sure you’ve heard of Nora Roberts. You know her? She’s worth around $30-$60 million a year and has published over 200 novels. She started out writing for Mills and Boon. And just so you know, more than one in five paperbacks sold in this country are published by Harlequin (oh, they own M&B, guys).

And please, don’t get me started on digital publishing.

To hell with it, I’ll tell you anyway.

When the Australian market saw a shift from print to digital publishing, the romance industry’s response was insane. We had publishers rapidly converting thousands of backlist titles to supply to their readers whilst working towards simultaneous releases on both print and ebooks. It was a massive task, but they understood what needed to be done to keep their readers satisfied.

Not only that, but digital sales have started to beat print and we’ve seen the creation of some amazing Australian digital-first imprints like Momentum, Escape and Destiny to cater to this need. These guys deal purely in ebooks and I’m telling you, there are some absolute GEMS amongst them. The subgenres have just exploded, with boundaries being pushed as publishers take risks they never have before.

For Amazon, romance accounts for the largest category of genre fiction sold and, according to Publishing Perspectives, ‘romance buyers are buying ebooks to a greater extent when compared with other major fiction subgenres and ebook sales of romance books have proportionally doubled in one year, from 22% in Q1 2011 to 44% in Q1 2012’.

So tonight, with your big program reveal, you’ve disappointed once more. You’ve managed to completely remove romance from the festival. Sure, you’ve included two panels that feature erotica authors, but they’re only there to talk about sex. Not love. Because love is gross and tacky, right?

If you don’t believe that this genre is taken seriously, then please take a look at some of the popular romance scholarship that is being written right here. It’s incredible and thought-provoking and relevant — which is exactly what you’re asking for in your letter from artistic director Jemma Birrell.

And please, listen to the publishers. SWF is an event for writers to connect with other writers and even publishers. Last year (and even before that), publishers were talking about how romance is a genre that they’re pushing and watching keenly.

Your refusal to acknowledge this genre as a force within both the publishing industry and readers’ hearts is blind and foolish. You’re falling behind in a world that has drastically changed its mind about romance fiction, and the fact that you choose to turn the other way makes your snobbery all the more ridiculous. There is no place for that in publishing. Listen to your readers and writers. Take a look at some of the amazing talent you have in your backyard — the dozens (even hundreds) of authors eager to speak to readers and future writers about their craft and the genre that they love so much. Step down from your insane pedestal and realise that romance is a genre of worth. Then maybe reconsider your position and come back to us next year with a properly thought out program that takes into consideration the thousands of women who consistently work to make romance the best genre it can be.

This letter isn’t for them, because they know all this stuff. This letter is for you to realise that with each passing year, you’re creating a culture of resentment and anger in a community that only wishes to support the work that you do. You reinforce this idea that romance isn’t worth talking about and interrogating. But you should know better. We’re not asking for a pure program of romance. A panel or two would do. If not, then there are so many romance authors who are more than capable and qualified to speak on fiction panels that aren’t romance-focused. Their prolificacy is ridic, in the best way possible, so they definitely know what they’re talking about when it comes to craft and writing. All I’m saying is that you have this amazing group of women just waiting to be mobilised for events exactly like this. For inspiration, look to your Melbourne and Brisbane counterparts — consider romance.

PS Thanks for taking out the serious discussion of fanfiction that represented the fanfic community. I attended the session last year and it was actually really great since you included some scholars and publishers. Don’t mess with a good thing, right?