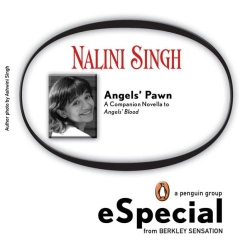 First, she writes a new series with a fresh spin on the whole angel thing that immediately sucks you into her world—there’s no warm and fuzzy touched by an angel huggy stuff here.  In Angels’ Pawn, angels run different districts where they offer immortality in  the form of vampirism in exchange for a century of service. Vampires that violate the conditions of their contract are hunted down by guild members like Ashwani, the heroine of the novel.

Ashwani has a love-hate relationship with Janvier, a 200-year old  vampire she occasionally has to hunt only to find, mid-hunt, that he’s made up with whichever vampire he’s pissed off. Ashwani approaches Janvier for assistance as she investigates and eventually conducts a rescue for a kidnapped vampire. The action is tightly written and fits well within the bounds of the novella. Click here to read an excerpt.

Then of course, Singh, who is known for her steamy scenes, sets up the tension between Ashwani and Janvier, and then it’s like watching a movie with an interrupted kiss. I was left feeling as frustrated as Janvier. (I told you she was evil!)

Then, because its a novella, it ends somewhat unfinished, but just enough so that you want to know what happens next.

Which really shows: a) how masterful Singh is at creating a world that makes you want to hear more of it; b) how well it’s been set up to make you want to buy the new release on tomorrow; and c) how nalini singh is just really, really evil. (Possibly in a good way.) I am now really looking forward to the next book.  And please, please can they, like, hook up already?!?

The first novel in the series, Angels’ Blood, is due for release tomorrow.

Angel’s Blood is only available as an e-book through the following stores: Amazon Kindle, Books on Board, and Sony eBook store.