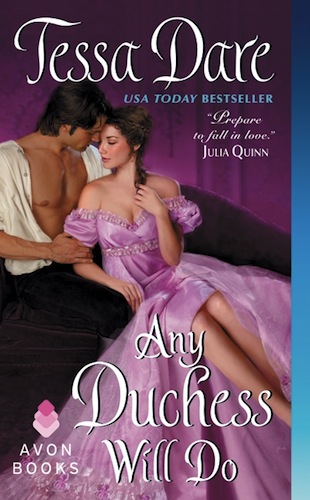 Just like a prospective duchess, it was charming and witty and able to stand alone.

The Dowager Duchess of Halford is desperate for her son Griffin, the current duke, to get married. He absolutely refuses. She drags him to Spinster Spindle Cove to check out prospective candidates and says that he can pick anyone and she will turn that girl into his duchess.

Pauline Simms is having a really shitty day. Everything that could go wrong has gone wrong, but she is trying to make the most of her life as a serving girl in a tavern. Her day is about to get better or worse, depending on your point of view, when the duke picks her to be his duchess.

Griffin and Pauline make a deal: if she fails in a week he will give her the money she needs to open her dream bookshop in the village. The catch is that Pauline is actually really good at her duchess lessons. And serving girl or no, she would make an awesome duchess. Will love prevail? Of course, it will.

Ah, the classic romance. The kind that keeps you up till 1.30am. I started the book and couldn’t put it down. There were so many things that I liked about it—it was fun, refreshing, and even the duke having a Big Secret didn’t weigh the book down.

I love that the characters are equally matched. Pauline never lets anyone put her down. She is always a fighter, always trying to enrich herself, and she has big dream, which she works hard to make happen. She and the duke have merry, ‘impertinent’ exchanges that are thoroughly entertaining. Griffin is a typical brooding hero—he has more depth to him than everyone perceives—and watching both of them fall in love is sweet.

Special mention goes to the Dowager Duchess, who almost stole the show with her attempts at, uh, let’s call it craftwork. The other characters from the Spindle Cove novella make an appearance, too (Alpine Assassin, anyone?).

I really enjoyed this novel. Just like a prospective duchess, it was charming and witty and able to stand alone. (I haven’t read any other books in this series.) I look forward to reading more.

An advance reading copy of this book was generously provided by the publisher via Edelweiss.