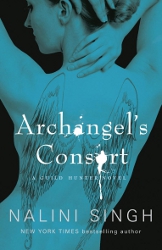 A solid instalment in the series, despite the exhausting intensity of the romance and a slightly underdeveloped external plot.

This review was originally submitted as an entry for the ARRC2011 Reader Challenge and was selected to be in the final round.

Archangel’s Consort continues the story of Elena, former Guild Hunter and newly made angel, and her lover Raphael, the archangel of New York. Vampires are breaking their Contracts all over the city and archangels are showing signs of madness. Either an old foe is targeting Elena, Raphael’s greatest vulnerability, or an ancient power is awakening—one that Raphael will have to confront but may not be able to vanquish.

Newcomers to the Guild Hunter series shouldn’t find it difficult to pick up the basic characteristics of the world that Nalini Singh has created. The violence is graphic, but less so than in previous books. The power struggles between angels may get confusing, but it’s easy enough to follow the external plot even without fully understanding these nuances.

As the title suggests, the story’s emotional arc explores the way in which Elena and Raphael negotiate their relationship—her desire for independence despite her limitations, his determination to protect her, and their struggle to balance the vulnerability of humanity against the power of immortality.

Singh has set up some beautiful tensions in the series. Is Elena Raphael’s strength or his biggest weakness? Is humanity a blessing or a curse? Can theirs be a love between equals, when Elena is always at a physical disadvantage? Many of the power struggles between Elena and Raphael are intense and deeply romantic. They spend a lot of time in the bedroom—perhaps a little too much.

Though it pains me to admit it, at a certain point the scenes between Elena and Raphael begin to feel repetitive. They have issues to resolve, but playing these out in the bedroom, with the same level of intensity each time, is exhausting and adds little to the story—there just isn’t enough conflict between them. (That said, I’m sure many readers will relish these scenes. You know who you are!) As a result, the external plot, though intriguing, lacks room to properly and subtly develop, especially with all the minor characters who come into play.

Archangel’s Consort is a solid instalment in the Guild Hunter series. Fans will be pleased to know there are plenty of scenes with Dmitri and Illium, and they’re as mysterious and swoonable as ever. Despite Elena and Raphael’s individual issues to resolve, their romance seems fairly complete, so it’s not surprising that the next book, Archangel’s Blade, features Dmitri and an as yet unrevealed heroine.

Books in the Guild Hunter series

Newcomers to the Guild Hunter series shouldn’t find it difficult to pick up the basic characteristics of the world Singh has created. The violence is graphic, but less so than in previous books. The power struggles between angels may get confusing, but it’s easy enough to follow the external plot even without fully understanding these nuances.