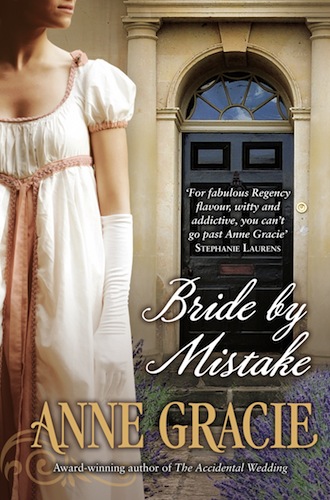 Congratulations to Lilian Darcy, Anne Gracie,  Barbara Hannay and Bronwyn Parry, whose books have been announced as finalists for this year’s RITA awards, and to Chris Taylor for her Golden Heart award nomination.

A RITA award is the romance equivalent of the Oscar, and having four local authors in the running is an excellent achievement. Hannay and Parry’s nominations are particularly exciting as the books are both set in rural Australia and published locally.

For the Golden Heart awards, given to unpublished manuscripts, Australian writer Chris Taylor is nominated in the Romantic Suspense category for The Predator.

You can view the full list of RITA and Golden Heart finalists on the RWA website. The winners will be announced on July 20 at the 2013 RWA Annual Conference in Atlanta, Georgia. Bride By Mistake by Anne Gracie

Eight years ago, Lieutenant Luke Ripton made a hasty wartime marriage to protect a young girl from a forced union and then left her protected in a remote mountain convent.  Now, Luke is Lord Ripton, but he has been unable to obtain an annulment, which leaves him no choice but to collect a wife he never wanted.

For nearly a decade, Isabella has waited like a princess locked in a tower, dreaming of her handsome, dark-eyed prince.  Her dreams are shattered when Luke reveals himself, not a prince, but an autocratic soldier, expecting her unquestioning obedience, which is something Isabella’s fiercely independent nature will not tolerate.

But while Luke and Isabella’s fiery personalities clash at every turn, they remain bound to their vows, never expecting that the passionate fury they share could become passion of a different kind . . . When Zoe, restless black sheep of the Porter family, discovers that her biological father is a North Queensland cattleman, Peter Fairburn, her deep desire to meet him takes her from inner city Brisbane to a job as a stockcamp cook.

Zoe’s mother, Claire, is wrestling with guilt and shock over Zoe’s discovery. She swears Zoe to secrecy, fearing that the truth could ruin the career of her high profile politician husband. When she is forced to confront her past, Claire also reassesses her marriage.

Virginia Fairburn is happily married to Peter, but she’s always lived with the shadow of the other woman her husband loved and lost.

On the muster at Mullinjim, Zoe meets brooding cattleman Mac McKinnon, who knows from painful experience that city girls can’t cope in the bush. Every instinct tells Mac that Zoe is hiding something. As the pressure to reveal her mother’s secret builds, Zoe fears she must confide in him or burst.

The truth has the potential to destroy two families. Or can it clear the way for new beginnings? Trapped in rugged country in scorching summer heat, pursued by ruthless gunmen who can’t afford to fail, Jo and Nick will need all their skills and courage to survive.

The national parks where Ranger Jo Lockwood works, on the edge of the New South Wales outback, are untamed stretches of dry forest cut through with wild rivers. She’s often alone, and she likes it that way until she discovers the body of a man, brutally murdered, in a vandalised campground.

Detective Senior Sergeant Nick Matheson knows organised crime and gang violence from the inside out. He’s so good at undercover work that his colleagues aren t sure which side he s really on. His posting to Strathnairn is supposed to be a return to normal duties, but the murder victim in the campground is only the first of Jo’s discoveries.

As Jo and Nick uncover drugs and a stash of illegal weapons, the evidence points towards locals young men already on the wrong side of the law. But as far as Nick s concerned, it doesn’t add up. When the body count starts mounting each brutally punished before death he becomes convinced that one person is behind the killings, one person is manipulating the men to commit horrific crimes, forming them into his own private drug-dealing cartel.

Jo has seen the man’s face, and now she’s his next target. Nick’s determined to protect her, but trapped in the rugged outback he and Jo will have to act quickly if they are going to survive. When Alicia McKinley agreed to a whirlwind Las Vegas wedding, she’d been swept away by the sheer romance of it all. How could she not say “I do” to Michael James McKinley, the gorgeous doctor who offered her everything she’d ever dreamed of? Still, after years of coming in second to MJ’s career, it was time to say “I don’t” to the workaholic husband who took her totally for granted.

But MJ is not a man who gives up without a fight. He and Alicia might not have a perfect marriage, but now that he knows what is on the line, he is determined to risk everything—including his heart—for a second chance with his wife!