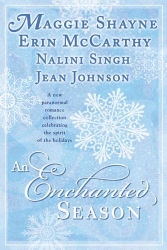 Beat of Temptation is part of an anthology, An Enchanted Season, but I just had to post about it. I cried. I can’t remember the last time I cried while reading a romance novel or when I last read in the car, but I did both. It was that good.

Beat of Temptation is a stand alone novella set in the Psy-Changeling world, and while it isn’t essential to the series, it offers a glimpse into the changeling mating bond. There’s an external plot dealing with the relationship between Psy and changelings, but it’s peripheral to the story. Beat of Temptation is about Tamsyn and Nate (introduced in previous books in the series), who recognised the mating bond when Tamsyn was only fifteen and Nate much older (twenty-five?). Now, nineteen-year old Tamsyn wants to … well, get the party started, but Nate wants her to enjoy unmated singledom for a while because he’s scared she’ll end up like his mother, who married young and ended up committing suicide.

Beat of Temptation showcases Singh’s talent for writing damn good romance. The chemistry between Tamsyn and Nate is excruciatingly delicious … or maybe deliciously excruciating. Even though the core of the story’s conflict is a misunderstanding of sorts, it’s totally believable. Most of the story focuses on Tamsyn and Nate, and without the burden of an overly complicated plot, their romance is fleshed out in delectable detail. The sexual tension sizzles, and the story packs such a punch that I think maybe Nate is now tied with Lucas for my favourite hero in the series (with Hawke in reserve because he’s yet to get his book). Mmm … Nate and Lucas–now that’s something to contemplate just before I go to bed!

I had to order this book in from Galaxy because when I rang them, they’d already sold out of their first order. I’ll post about the rest of the book later when I’ve read through all the stories. Maybe. Or I might just read this one over and over again. Click here for an excerpt.