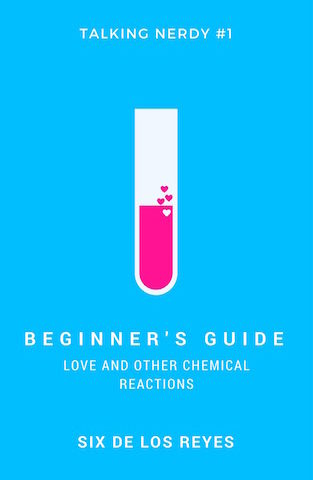 Review of: Beginner's Guide: Love and Other Chemical Reactions) Beginner’s Guide: Love and Other Chemical Reactions got a Twitter boost a couple of weeks ago when Courtney Milan compared it to The Rosie Project. That’s a high bar to reach, and while I found Beginner’s Guide charming, refreshing and sweet, it doesn’t quite have the polish of Graeme Simsion’s romcom. (You can read my review of that book here.)

But this shouldn’t take anything away from emerging Filipino author Six de los Reyes. This self-published story subverts a lot of expectations, and for that alone, Beginner’s Guide is worth a read.

Kaya Rubio is determined to bring a date to her cousin’s wedding, so she designs an experiment to find the ideal boyfriend. Kaya is what’s affectionately known in Filipino parlance as NBSB: No boyfriend since birth. Her life is consumed by her work as a molecular genetics researcher and graduate student, and truth be told, she’s socially awkward, and the small talk required to actually find a date is just not something she’s comfortable doing.

One of the things I love about Kaya’s experiment is that it hinges on the 37% rule — the optimal stopping theory. I first heard of this rule at the book launch of Mathematics and Sex by Clio Cresswell. Cresswell explains the theory thus:

My most famous theory is the 12 bonk rule. You have 12 partners and then you pick the next best after that for you so the next best could be number 16, 50, 110 it’s up to you to decide. I’ve had way more than 12 partners but that’s shown me that I have probably met someone in my past that I could actually be very happy with but I’ve just got a commitment issue.

(If you prefer video, here’s Cresswell explaining it to Conan O’Brien.)

Cresswell also mentioned the bean jar anecdote: If you put a jellybean in a jar every time you have sex in the first year of marriage, and then take a jellybean out of the jar every time you have sex after that first year, you would never empty the jar completely. As a newly married woman, I was outraged by this, and I remember my friend quietly laughing as I put my hand up as soon as they asked for questions.

Anyway, back to Beginner’s Guide… Kaya’s experiment requires her friend Eugene to find random dates to set her up with. The first four dates (the first 37%) are to be rejected. After that, anyone who is as good as or close enough to the best of the 4 that were rejected, is the optimal match for Kaya.

Because there’s a lot of scientific and mathematical language in the story, it needs someone who forces the characters to explain everything in language that the reader can understand. Enter the hero — Nero Sison is the hot owner of Kaya’s favourite cafe, In Lab. (Non-Filipino readers should note the pun: It’s a mispronunciation of ‘In Love’.)

It’s clear that Kaya isn’t immune to Nero’s charms, but she’s clueless about her own reactions and, when she starts to realise that he’s just not like all the other guys she’s dated, she’s clueless about what to do next. And because science is her safety net, she comes up with the idea to use Nero as her null control, which involves going on a date with him on the assumption that they’re completely unsuited to each other and that she will have to reject him.

Nero, of course, has other ideas. The reader, despite being in Kaya’s head for the entirety of the novel, is left in no doubt where Nero’s affections lie.

There are indeed parallels to be had between The Rosie Project and Beginner’s Guide. But where the former centres on a hero who is emotionally inaccessible for most of the story, the latter features a heroine who isn’t unemotional by any means — just uncomfortable with expressing those emotions. I feel like Kaya is more Bones than Don Tillman. There are times when her voice — in my head — even sounds like the TV character. Both books feature to-good-to-be-true love interests, but where Rosie is at best a manic pixie dream girl, Nero gets his own character arc, even if it feels somewhat under-explored — one of the hazards of a romance written entirely from the heroine’s point of view.

What they do have in common are protagonists surrounded by friends who love them despite their awkwardness. In Kaya’s case, she’s also part of a large and rambunctious family, who forces her to puzzle out the mysteries of social niceties, while also reinforcing how alienated she feels surrounded by so many extroverts. Being part of a large family is a blessing and curse: they want the best for Kaya, but they don’t realise that their family dynamics perpetuate the stereotypes they have of her.

Because of this, I feel like Kaya isn’t emotionally inaccessible so much as just deeply introverted. And I love that De los Reyes has written this heroine. The science is a beautiful bonus, but just think of how many times we’ve read a romantic heroine who has trouble relating to people because it’s actually exhausting for them? I can only think of one — a Kelly Hunter category romance featuring a code breaker heroine.

People dated other people. For fun. I’ve seen it on TV, in movies, heard it in songs, and read it in books, but here it was happening to me. A modified, diluted version, but still. It was dreadful.

And later, when one of her dates turns out to be a talker:

I was physically exhausted listening to him talk on and on and on. At the end of the hour, he gave me his contact information and said he’d add me on social media. I didn’t have the energy to say no.

The romance in Beginner’s Guide is a very slow burn — to the point where I’d say the story is borderline chicklit. But it’s definitely worth the wait, because when Kaya and Nero almost get it on, the writing is everything I love about romance. First, Kaya narrates it through Newton’s Laws of Motion — which, by the way, is one of my writing goals, so I’m bummed that it has now been done and done so very well — and this scene is so freaking hot without being very explicit at all. And then it’s devastating, and basically everything I want in a sex scene, even though it’s more of an almost-sex scene.

He took another step back, increasing the distance between us. “You’re unbelievable. You were actually going to have sex with me for research purposes?”

“It’s in our scope and limitations.”

“Do you even like me? Do you even, at the very least, find me attractive?”

It seemed an odd question to ask and I had no answers. “That’s irrelevant–”

“Right. Because according to your fucking list I’m unsuitable.”

Nero is sexy in an understated way, and he might even be a little too perfect, but you know what? I’m all for the nerdy girl getting the hot guy with ‘polite muscles’ who gets angry because the heroine wants to have sex without emotions. I melt. I do wish I had more understanding of what he sees in Kaya, but as we’re in her head for the entire book, the story allows the reader to fill in the blanks.

Beginner’s Guide is also really fun as long as you don’t get too hung up on the science. I mean, it’s awesome if you can follow the scientific jargon, but there’s a lot of it, so some skimming might be required. Not a big deal. And honestly, if one can cope with sheep shearing, cattle mustering, and the finer points of gambling in Regency England, there’s no reason why science should get in the way of a good romance.

This book isn’t perfect, however. I had huge issues with the editing, and I wish the story were a little more polished because it has so much potential. There are tense changes all over the place, and they kept pulling me out of the story — YMMV, though, because it’s one of those things that readers might not even notice if they’re engrossed in the plot. There are large chunks of internal monologues — I didn’t mind them, but breaking them up would have made the reading experience more comfortable for old farts like me who rely on large fonts. There are also some awkward phrases that just needed tidying up.

I’m a bit torn. Courtney Milan compared this to The Rosie Project, but that book had an entire editorial team behind it and it shows. I love the raw edges of Beginner’s Guide. Kaya’s narrative voice is strong and compelling. The sense of place and identity are part of what I love about the characters. But I can see the potential that a little more polish can bring to this story, and I just wish it had that chance to shine even brighter. That said? I can’t wait for the next book in this series.

Self-published. You can find the author on Twitter as @sixdlr.