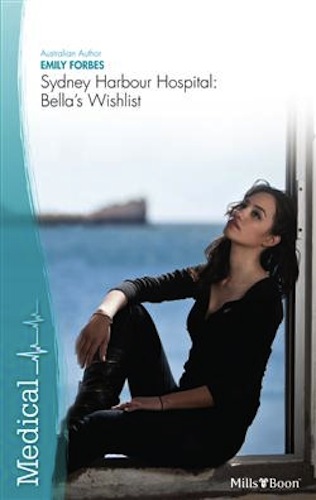 Bella’s Wishlist is book six in the Sydney Harbour Hospital series, and probably because I read the novels out of order, I wasn’t particularly excited for it. But I was definitely intrigued, because this is a romance that has a heroine with cystic fibrosis, which a) I know very little about, and b) I have never read about in romance. Because really, how not-sexy is being constantly sick?

Yeah, well, it may not be sexy, but shit happens to even the best of us—which is why Bella’s Wishlist humbled me. It’s a sweet, heart-warming story of a young woman struggling to get fire in her belly, in a figurative and emotional sense. In some ways, we’ve been there, too.

Bella Lockheart is the middle child in the Lockheart royalty. (Her great-grandfather founded Sydney Harbour Hospital, which means nepotism for the Lockheart girls. Of course.) She has the classic case of middle child syndrome—often overshadowed by Lexi, her gorgeous and vivacious little sister who works in Events, and by Evie, her headstrong and responsible older sister who is a Doctor in A&E. Bella (short for Arabella) is seriously ill with a genetic disorder, and is waiting for a lung transplant. She’s shy, a self-proclaimed plain Jane, and is resigned to being the ‘spinster sister’. Add to that two parents who neglect their duty of care for all their daughters, but especially to their most vulnerable child.

Bella lands herself in hospital again with a chest infection, after which Sam, Lexi’s fiancé (their story is in Lexi’s Secret), and Bella’s consulting doctor, states in no uncertain terms that she is dying, unless a suitable lung transplant is found. The news is not unexpected, but it drives home in Bella’s mind that she doesn’t have much time left.

Enter Charlie Marshall, a fellow SHH doctor, and one of Evie’s oldest and greatest friends. Formerly a surfer dude, with requisite sun-bleached hair (although he is currently donning a bald head) and strong physique, he’s a bit of a ladies man. Bella has hero-worshipped him since she was a teenager, but just doesn’t envisage him ever seeing her in the same light. Still, she tentatively strikes a conversation with Charlie, not to talk about the looming transplant operation, but out of concern for her sisters. Eventually he becomes a sort of liaison/confidante for Bella.

Understandably there is a lot of Bella’s introspection in this story, seeing as she pretty much spends most of the book in a hospital bed. It’s cold and isolating, even whilst being surrounded by a loving albeit small circle of friends and sisters. I can’t imagine what it must be like to grapple with any kind of constant, debilitating illness, living each day like it may be your last. In spite of all this, Bella’s one selfless lady:

‘… once you’ve got your sisters’ lives sorted out, I’m interested to know what you want for you.’

‘Me?’ Her tone suggested she hadn’t given any thought to herself and Charlie was astonished by her undemanding unselfish attitude.

She frowned as if she’d never given any consideration to her own desires and her grey eyes darkened.

This, of course, is not true.

As Charlie’s visits to Bella become more frequent, they ultimately discuss her ‘to-do list’, or wishlist, which is ‘not much’. But Bella’s never got into the habit of long-term goals. Charlie still suggests making a list, as ‘something to look forward to, instead of back.’.

One thing that stands out is what a lovely guy Charlie is. That’s not in air quotes, mind you. He’s a good listener, he doesn’t immediately want to get into Bella’s pants, and the more time he spends with Bella, the more he starts to appreciate her, and love her. He even helps her apply for a fashion design course. Do you know how hard those things are? We should all be so lucky. Still, Bella’s a real killjoy by maintaining a distance from Charlie, thinking he is being so nice to her out of pity and loyalty to her eldest sister; yet you can’t blame her when things seem so dire.

Charlie’s not having any of it, willing her to be positive.

‘What about your wishlist? What about us? You and I have unfinished business.’

Bella demands nothing less than unconditional love, but why is Charlie so certain that he can’t help her? This is a pretty pivotal point for Charlie’s emotional awareness; he unwittingly reveals just how deep his care for Bella really goes.

In amongst all this drama is the Evie and Finn sub-plot. Spanning across all eight SHH books (plus the bonus ninth book which is entirely devoted to them), theirs is touted as the epic speculative romance, sending the office grapevine into a tizzy everytime some juicy new gossip tidbit pops up. Gruff grouchy unkempt (but totes in a sexy way) whisky-drinking ex-soldier Head of Surgery, Dr. Finn Kennedy suffers from a mysterious pain in his arm/hand, which accounts for his manner, but he finally reveals to an angry Evie just what’s been causing his agony and douchebag of a personality. If you’ve been following the whole series, it’s quite a revelation. Admittedly I was intrigued by this pairing (it must be my tendency to fall for the dark brooding superheroes :P) more than the main couple, and I confess I did just read some of the other SHH novels to be drip-fed every Evie/Finn moment.

Meanwhile, Charlie maintains a vigil by Bella’s bedside, lamenting all the unspoken things like any groveling hero would. Seriously, Bella is one selfless (or was that stubborn?) heroine, but I am glad that Charlie matches her in his determination to make things perfect for her (actually, he probably made it too perfect, but hey, some purple-ness is OK). In one sweeping, romantic gesture he ticks all the boxes for Bella in one go. No doubt there are still obstacles to come for both of them, but they seem like they will weather it.

I don’t generally go for the sweet stories (gimme dark dark dark angst angst angst) but at least the SHH series has been interesting in that each author offers a unique voice and tone, so it’s been a bit of a roller-coaster ride.

Let’s face it—no one likes to be reminded of their mortality, especially us disillusioned and privileged Gen Y people, so Bella’s Wishlist was a poignant reminder that I have my (relatively) good health and it is never too late to carpe diem.

Who might enjoy it: Suckers for sweet, inspirational stories

Who might not enjoy it: Impatient readers (the story does run a little slowly)