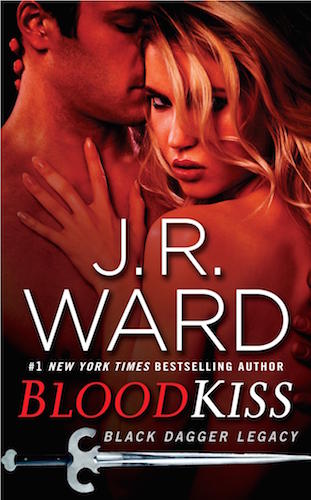 A sneak peek at the details for J. R. Ward’s new series, the Black Dagger Legacy.

The cover and back cover blurb for Blood Kiss, the first book in the Black Dagger Legacy series, has just been unveiled. We’ve met the heroine’s family in The King, but we’ll get to meet the hero and heroine in The Shadows. Paradise, blooded daughter of the king’s First Advisor, is ready to break free from the restrictive life of an aristocratic female. Her strategy? Join the Black Dagger Brotherhood’s training center program and learn to fight for herself, think for herself…be herself. It’s a good plan, until everything goes wrong. The schooling is unfathomably difficult, the other recruits feel more like enemies than allies, and it’s very clear that the Brother in charge, Butch O’Neal, a.k.a. the Dhestroyer, is having serious problems in his own life.

I’m assuming Craeg is pronounced Craig, but don’t quote me on that. I’m a little bit lost since neither name contains the letter H. But I think it sounds promising, since the training program is now open to females as well as males and Paradise wants to become more than just your average glymera female, so I think readers may like her more than some of Ward’s other heroines.

Blood Kiss will be released in paperback in December.