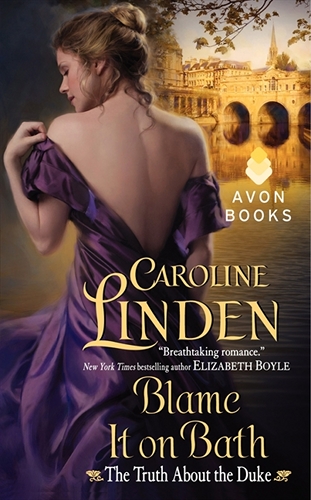 Review of: Blame It On Bath

A weak plot, dull characters and lack of chemistry make for a dud romance. It isn't the worst I've read, but that may be damning with faint praise. A weak plot, dull characters and lack of chemistry make for a dud romance.

I’ve enjoyed Caroline Linden’s work in the past, so I picked this book up as an impulse buy at Dymocks. Blame It On Bath is the second book in a series involving three brothers who found out that their father could have committed bigamy, which would result in the eldest losing his title and all of them losing their inheritance.

Blame It On Bath focuses on youngest sibling Gerard de Lacey, who is in pursuit of the blackmailer. But before he sets off on his mission, he’s accosted by Katherine Howe, a recently widowed heiress who proposes marriage—to save her from a marriage to Lucien, her puritanical brother-in-law, and to save Gerard from financial ruin should his parents’ marriage prove invalid.

I love Regency heroes who find themselves on the wrong end of a marriage proposal. It’s just so amusing and delicious, and Linden certainly got my attention. Katherine is trying to escape an untenable family situation—she endured her first marriage and a fleeting encounter with Gerard a long time ago has convinced her that he would be more suitable than Lucien as a husband. Gerard knows he must marry an heiress, and with scandal nipping at his heels, Katherine would provide him the security he needs, should he and his brothers lose their estates.

The problem with the story is that it never manages to hang together properly. The series arc—finding the blackmailer, discovery their motives and resolving the issue of the late duke’s first marriage—constrains the story and the characters. Worse, it goes nowhere. Gerard discovers this and that, but at the end of it, they’re not much closer to solving the mystery.

The problem with the characters is that there’s just no chemistry between them. I could hardly believe they were attracted to each other, let alone passionately in love. Linden continually misses opportunities to demonstrate how Gerard and Katherine become important to the other. Instead, we get moments of internal angst that seem to come from nowhere and moments of lust that I didn’t even bother skimming.

It’s a familiar refrain of mine, but the writing lacks subtlety. The series plotting also lacks momentum and, within this book, the tensions between characters aren’t handled well. Every time I think something interesting is about to happen, it’s followed by…nothing much. When I finally got to the end, I felt that I had already forgotten the story and the characters.

A weak plot, dull characters and lack of chemistry make for a dud romance. It isn’t the worst I’ve read, but that may be damning with faint praise.

Who might enjoy it: Readers invested in the series

Who might not enjoy it: Readers trying Linden’s work for the first time