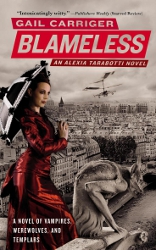 After the cliffhanger that was Changeless, the latest instalment in the Parasol Protectorate series brings us back to romance territory.

After Changeless, I was very frustrated. It was a total cliffhanger, and I went as far as DMing Gail Carriger on Twitter to ask what was going to happen next. She very nicely replied, I’m very sorry but I can’t tell you. Fortunately, Kat got a review copy of Blameless last Friday, which coincided with Carriger’s visit to Galaxy to randomly sign things. She assured us that, as a believer of happy endings, she always makes sure everything ends with a HEA.

In the meantime, Professor Lyall, the Woolsey pack Beta, is desperately trying to keep the pack together while her husband is off getting drunk off his face on an unknown source of alcohol. Of course, people—I should say vampires—keep trying to kill her, which adds to the mystery. How did she get knocked up, and why does everyone want to kill them?

I’ve always loved Alexia as a character. She never lets anyone knock her down and has the kind of stubborn tenacity that’s enough to kick butt without being annoying. I like how despite her circumstances—she left her husband, and that alone is enough to make someone a pariah in Victorian England—she kept trying to make the most of her situation and hold her head up high. Her husband was the only person who was able to bring her down to her knees (and even then he had to do it first!) and now his betrayal of her has left her reeling, even though she tries to pretend it doesn’t. I think that part was well done.

Despite everything, Lord Maccon manages to redeem himself in the end. I loved him in the first book and then he fell out of favour, so to speak. He’s begun to worm himself back into my good graces with his actions in this one. His actions and behavior, especially his interactions with his second, Professor Lyall, lead to some of the best comedic moments in the book.

I felt that the tone and language, as before, was in line with the era and the steampunk elements fit in very well. The dialogue was sharp and witty and the descriptions, while giving a vivid picture of the situation, left just enough to re-create the wonders of steampunk in my own imagination.

The storyline was wrapped up well—if their marital issues hadn’t been resolved I would have hurled the book across the room—while more details were dropped to make you wonder what would happen next. I, for one, am excited at the prospect of their coming progeny and its implications, and would like more details on Alexia’s father and the mysteriously evil cultish Templars. (Carriger is really good at dropping these hints that leave you wanting more.)

A definite YAY! But only if you’ve read the rest of the series. If you start here you’ll be coming right in the middle of the story, and while it could work, you’ll be missing out on a lot. Fortunately, there are two more books in the series due next year. Can’t wait for those!

This book was released on September 1, 2010 by Orbit. Gail Carriger will be at the World Science Fiction Convention in Melbourne, Sept 2-6.