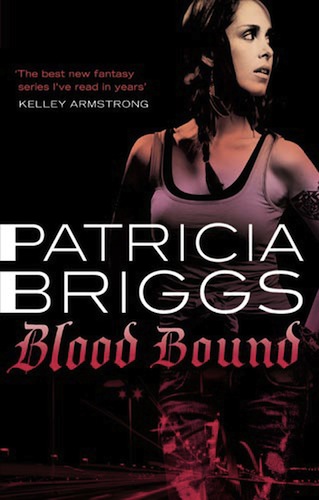 The pacing and plotting are not as balanced as in the first book. Mostly we're just along for the ride---but it's still a fabulous trip. The pacing and plotting are not as balanced as in the first book. Mostly we’re just along for the ride—but it’s still a fabulous trip.

Blood Bound is the second book of Patricia Briggs’s hugely popular urban fantasy series featuring Mercy Thompson, a coyote shapeshifter nominally mated to a werewolf and formerly employed by a fae mechanic.  (As I mentioned in my review of Moon Called, this series is book crack.) After Mercy’s adventures in the first book, she’s asked to return a favour by accompanying her vampire buddy, Stefan, on a mysterious errand that ends in gruesome violence when they discover a demon-possessed sorcerer turned vampire on a killing rampage.

This new vampire is deadly, and Mercy reluctantly agrees to leave the hunting to stronger creatures. After one of the werewolves turns up barely alive, Adam, the pack alpha, and Samuel, Mercy’s werewolf housemate, go hunting themselves. Unfortunately, werewolves turn out to be highly susceptible to demon magic, which causes them to lose control. When Mercy gets a late-night visit from the demon vampire, she realises that her friends are in the vampire’s hands and she has until sunset to save them.

There’s a lull in the action, from Mercy’s point of view, as she waits for the hunting party to catch their quarry. Briggs uses this time to show a little more of Mercy at her element—fixing cars at the garage, stirring up the werewolves sent to guard her—and to show some of the intricacies of the world she is building. Gabriel, Mercy’s new assistant at the garage, is clever and young without being irritating or needlessly present in the story. When he nonchalantly mentions that Stefan is a vampire, Mercy is shocked, but his response is basically a variation of, What? Do you think I’m stupid? And a reporter who, at first, tries to finagle dirt on the werewolves from Mercy, turns out to have a different agenda that reveals more about the power dynamics within werewolf society. The villain is only marginally interesting; the highlights of this book are all in the developing relationships between Mercy and the characters who support as well as antagonise her.

Briggs is sympathetic to the werewolves, but there are constant reminders of their instinctive aggressiveness, which can translate into brutality, and the cultural and social structures that can either alleviate or aggravate these tendencies. There is a lot of nature versus nurture as well as instinct versus control in Briggs’s world, and the answers remain ambiguous, which make for highly nuanced situations as well as great fodder for rereads. Briggs also puts in place subtle constraints to balance the power between humans, vampires, werewolves, and fae.

But the vast majority of world building in this book happens in vampire territory. When Mercy is forced to hunt the demon vampire, she visits Stefan’s menagerie for information on vampire habits, hierarchies and customs. There’s a lot to absorb, but Briggs keeps the story engaging if a little less action-packed. The vampires are much more difficult to like than any of the other paranormal creatures introduced in the series so far, and Briggs never lets us forget how scary they are. But there are also moments of humour:

Like most people who own businesses, I work long hours that start early in the morning. So when someone calls me in the middle of the night, they’d better be dying.

“Hello, Mercy,” said Stefan’s amiable voice in my ear. “I wonder if you could do me a favor.”

Stefan had done his dying a long time ago, so I saw no reason to be nice.

As a character, Mercy continues to grow on me. It’s not just her humour, which for the most part hits the sweet spot between sarcasm and self-deprecation—‘[If not for getting a job as a mechanic] I’d have had to take my liberal arts degree and gotten a job at McDonald’s or Burger King like all the rest of the history majors’—but that she acts so reasonably. Before she goes out to find the demon vampire, she calls her friends and leaves messages to let them know what she’s about to do, in case something goes wrong. It’s not often this happens in urban fantasy, and yet it’s so sensible.

In the true love stakes (see what I did there?), this book both illuminates and complicates.

Mercy remains apprehensive about how a relationship with Adam will change her, while at the same time drawn to Samuel because of their past and the glimpses of vulnerability that occasionally slip through. Thankfully, instead of over-compensating for her indecisiveness by being needlessly hurtful or sarcastic to either one of her leading men, Mercy avoids them and potentially emotionally charged situations with ‘clever avoidance tactics’. It’s kind of refreshing and fun.

This love triangle—quadrangle if we include a newly revealed admirer of Mercy’s, but I’m pretty sure that will remain unrequited—leaves me tense but not worried. Briggs shows in many different ways—some more obvious than others—which is the better man for Mercy. Mercy knows it, too, but there are issues to resolve in her heart and in her head before she can admit it and embrace her decision. What makes it even more delicious is that the hero is also discovering new ways in which Mercy fits into and understands his needs and his life.

I’d be remiss not to mention that, like Moon Called, this book features Mercy throwing up—once on-page after a beheading scene, and four times off-page after returning home from one of the story’s climactic scenes. My vomit list thanks the author.

Briggs’s world building is intricate and her prose is easy to read when it needs to be, yet nuanced enough to provide a solid foundation for future stories in the series. The pacing isn’t as balanced as in the first book—Mercy isn’t as fully involved in finding the villain until later in the story—and the violence escalates too quickly to allow readers to decipher the clues as Mercy does. Mostly, we’re just along for the ride—but it’s still a fabulous trip.

Who might enjoy it: Readers looking for non-stop mayhem

Who might not enjoy it: Readers who believe that vampires should sparkle