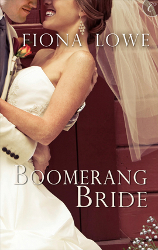 Some of the plot manipulations may stand out like dog’s balls, and you’d be copping a fair bit of earbashing on Strine, but if you like gently paced romances, it's worth a Captain Cook. When Mark Olsen—‘direct descendent [sic] of Viking marauders’—sees a bride wandering down his small home town, the least he could do is help her find her fiancé. Mark’s home for his annual Thanksgiving visit, and he’s already counting the days before he can leave.

Until it turns out that would-be bride Matilda Geoffrey—‘direct descendent [sic] of convicts’—has been left standing on Main Street, with nothing but a wedding dress, a tiara and a two-tiered fruit cake ‘that wouldn’t pass a breathalyzer test’. No groom in sight and no funds for a return trip home to Australia.

Mark seriously does not want to stay in Hobin, Wisconsin any longer than absolutely necessary. His father died when Mark was seventeen, and he assumed responsibility for his mum and three sisters until they had recovered or grown up enough that he could finally live his life, make bucket loads of money and avoid his family as much as possible.

Boomerang Bride has its heart in the right place, but the conflicts are just not strong enough to sustain the story. What conflicts there are also diminish the characters.

Mark’s lingering resentment of the five years he spent supporting his family doesn’t ring true. Or if it does, then one is forced to conclude that those five years taught him nothing at all about love and family. His sister keeps her illness a secret, because if she’d warned him it’s likely he would have skipped coming home and sent a home nurse instead. A seventeen-year old doesn’t give up five years of his life only to turn into a man who pays other people to take care of his loved ones.

Meanwhile, Matilda prefers to be destitute rather than pursue the scammer who steals her inheritance. Her gullibility is bordering on TSTL (too stupid to live). She’s savvy enough to buy things on eBay but not to look up her fiancé’s supposed address on Google Maps. I’m no expert on immigration rules, but I didn’t find it believable that Matilda’s story wasn’t verified at Customs, given her one-way ticket and lack of cash.

There’s also the barrage of Australian slang that has to be explained. I appreciate that author Fiona Lowe doesn’t Americanise Matilda, but it was too much and not subtle enough and, frankly, I’m shocked that an American wouldn’t know what cutlery is:

‘Kyle, can you tell me where the cutlery and serviettes are?’

She explained, wondering if it was her accent. ‘Knives, forks, spoons and paper things you put on your lap.’

‘Oh.’ Realization lit up his face. ‘Silverware and napkins. They’re in the drawer over there.’

More promising is the secondary romance between Mark’s sister Lori and her ex-lover Brian. Their few scenes together are deeply emotional and romantic, including one brief but hot phone sex episode:

The she lost herself in his words and the touch of her hand which was his hand until nothing existed except the rush of sensation that took her away from every idea of herself.

Who might enjoy it: People fascinated by Aussie slang

Who might not enjoy it: People who ring the help number when their two-dollar coin gets stuck in the chip vending machine

An e-galley of this book was generously provided by Carina Press via NetGalley.