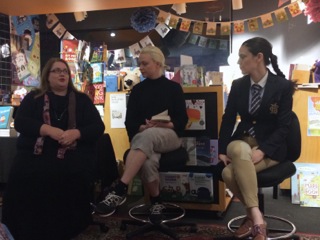 CS Pacat, Sarai Walker and Ellena Savage discuss the raunchy, the marginalised and disaffected. Pop culture is where subversion needs to happen.

This recap is a guest post by the fabulous Claire Parnell. Claire is a research student at Deakin University in Melbourne. Her thesis is on romantic ideologies in Contemporary traditional and self-published romance novels. Her favourite book changes almost daily, but she will always adore anything by Melina Marchetta and Jane Austen, and loves the contemporary and rural romances on her Kindle. @cparnell_c

Going to a bookshop at night is strangely exciting.  Going to a bookshop at night to listen to a talk about feminist writing by three kick-arse writers was absolutely thrilling. I walked, or maybe more precisely bounced, into the St Kilda, Melbourne bookstore excited but not entirely sure what I was going to get from the evening. Miles Davis played overhead, in a move I’m sure was made by the staff to get us all into an appropriately thoughtful mood for what was a satisfyingly reflective talk.

Together with The Lifted Brow (R), Readings delivered what host Amy Vuleta described as the ‘dream panel’ for its Breaking Waves: Feminist writing now discussion. Ellena Savage, journalist and editor of The Lifted Brow, Cat (C. S.) Pacat, author of the Captive Prince (R | BT | Amz) trilogy, and Sarai Walker, author of her debut novel Dietland (R | BT | Amz), sat down early to ‘discuss the raunchy, the marginalised and the disaffected’. The writers each deal with feminist themes in their works, including, but not limited to, diet and the policing of women’s bodies, the female gaze, female desire and sexuality, pornography and rape among many, many others.

What is feminist literature?

Amy began with the question to the authors about what they consider feminist writing. It’s a big question to immediately grapple with but one the authors weren’t afraid to answer: What exactly is feminist literature? As Ellena explained, this question asks what we accept and tolerate as functional literature. Cat described growing up in the 1990s with choice feminism — an idea that anything a woman does is inherently feminist — but she considers feminist prose ‘writing that in some way actively or proactively challenges the patriarchy and breaks down those structures.’ Sarai added that feminist writing doesn’t always have to stand out: ‘lots of books have feminist themes, but in feminist literature these are more dominant.’

Despite gaining prominence in our everyday lives, feminism seems to remain somewhat at the edges. Amy joked that instead of having a separate section in the bookstore for feminist literature, the way of the future would see people coming in and shamefully asking, ‘Where’s the non-feminist section?’ That instead of it remaining at the fringes, sectioned off as a genre categorisation, it would ideally be a part of most, if not all, literature.  Having said this with humour, this is an important point.  As Cat argued, ‘pop culture is where the pedagogy happens… where the myth making happens’ and for this reason, it is where the subversion needs to happen.

Cat’s own work deals with agency and the female gaze over men’s bodies and became a number one bestseller across categories a mere 24 hours after self-publishing her web serial as a novel.

The female gaze is relatively new in media texts. According to Cat, this newness is often met with aversion because the female gaze is so little explored. It’s ‘almost too much… We haven’t seen it before and we’re taught we shouldn’t want it.’ But, as she points out, it is important because objectification is about power relation. The world works in dichotomies: if there’s an object, there’s a subject and if you’re a subject, you act, if you’re an object, you’re acted upon. Cat argues that ‘objectification of women isn’t selling sex, it’s selling power’ to men.

Sarai’s work is interesting in the artful manner it draws attention to the way women are objectified as a natural fact. Her ‘feminist fight club, but way, way darker’ novel Dietland works by ‘flipping the switch’ as men’s bodies become visible and objectified as women’s are now. Greatly inspired by David Fincher’s film Fight Club, Sarai wanted to create ‘something like that for women.’

She was interested in the way anger is portrayed in the film and how men and women deal with anger differently. The men in Fight Club display anger through quite a spectacle. Women, on the other hand, tend to ‘turn their anger inward’. Sarai admits she was absorbed by the idea of whether women ever express their anger outwards and, if so, what would that look like?  She contends that violence for women is not new and talks about the violence women do to their bodies through dieting or starving themselves, and beauty rituals that leave them with sensitive pink skin or bleeding.

Admittedly, I’m a little obsessed with the romance genre, and during the audience question time I couldn’t help but ask whether the authors thought romances could be considered feminist writing. After all, it is a genre that is written by women, about women, and for women readers, and not only the largest genre written by women but also the largest commercial genre, period. Cat made a significant point about the illogical juxtaposition between the level of commerciality of the romance genre and the way it’s corralled in society.

The content of romance novels may not always be explicitly feminist. A feminist critique of romances may in fact tell us interesting things about our cultural ideas of love (and a few scholars have dealt with this questions). However, Cat made the wonderful remark that it’s not until we have a genre that deals with female desire that we can have a feminist discourse around it. She further pointed out that romance is the genre that financially supports the publishing of every other genre. That it is consistently denigrated, reviled and ignored illustrates a major problem in the literary world and society, in general, about how we view women’s work.

Not surprisingly, genre and form have a huge impact on the feminist aspects of authors’ work. Ellena spoke about her experience as a columnist and meeting resistance as a female journalist, and Cat talked about the way the Fantasy genre in which she writes complicates what she feels she can address in her writing. She says that nostalgia is a huge aspect of writing Fantasy but ‘with Fantasy, women can’t go back into the past’ without things getting complicated. For women, the past is limiting and, in this way, she wrestles with seminal Fantasy texts by incorporating feminist themes.

Feminism necessarily pushes the boundaries. The authors agreed that ‘Women’s Fiction’ can sometimes be an oppressive categorisation, particularly when feminist writing doesn’t always fit neatly in any literary box. Ellena explained how feminist writing has always worked to challenge traditional ways of describing things. Not surprisingly, this is often met with resistance. Sarai notes that ‘gatekeepers keep out a lot of this content that pushes the boundaries’, to which Cat added in support that, like many authors who work within the blurry edges of categorisation, she ‘had to prove the existence of a market’ for her work because of its innovation within the Fantasy genre.

Ending the discussion, an audience question posed feminism as a sphere, questioning how we should deal with ‘flawed’ feminism (non-inclusive or non-intersectional feminism). The panellists unanimously agreed with Ellena’s statement that, importantly, feminism is ‘not absolute in the types of knowledge it expresses… An idea is never finished’ and the ‘work of feminism must be constantly aware and update itself’. Supporting this, Cat expressed the inherent tension between solidarity and dissent, and that both are important for the continuation of feminist discourse. While important to Sarai, is the idea that ‘feminism is essentially hopeful’, it is ‘integral to feminism that things can change’.

The panel ended with the writers revealing their latest reads (an admitted thrill for Amy). It was a refreshingly appropriate, total bookshop question we were all happy to hear and a perfect ending to a responsibly critical and ultimately optimistic talk.