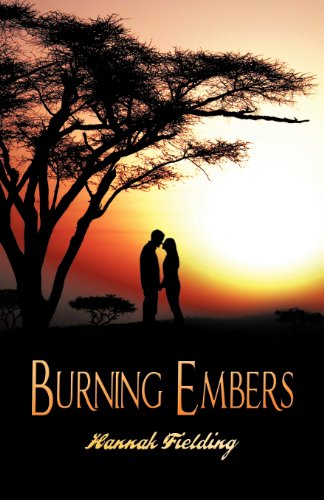 The premise of Burning Embers immediately hooked me in, simply because it seemed contradictory and potentially problematic. I know—that’s a terrible reason for wanting to read a book, but it’s the morbid curiosity I have. A contemporary historical? Set in 1970s Kenya? With a book cover using the most clichéd imagery to signify ‘Africa’? From a publisher that acquires Twilight fan fiction? So much could go wrong, as much as it could go right (not that I intentionally look for stories to rant about, mind you!).

It just so happens one of my favourite romance tropes is the 1970s/80s exotic encounter, complete with foreign locale, young, innocent Anglo heroine, and dark, smouldering hero (usually Mediterranean/Hispanic/French/North African), accompanied by a secondary line-up of quirky and/or villainous ‘natives’.

Yes, the casual sexism and racism and other -isms in these stories are bothersome. Yet for all their unsavoury colonial attitudes, I find these stories irresistible in their naiveté and datedness. Go figure.

So how would a book by a contemporary author recalling old-fashioned times hold up with a reader with modern-day sensibilities? Surprisingly well, in fact. And better yet, this story did not smell at all Twilight-esque, even though the cover literally looks it…

I actually took a very long time to finish this book. Much of that time was spent getting through the first few chapters alone, but after I managed that hurdle, I breezed through the novel effortlessly, and thoroughly enjoyed myself. The first page starts innocuously enough, but sifting through the following pages reveals a dollop of bloated exposition and, more irritatingly, a passive voice. My first impression of what would have been a breathless first encounter between Coral and Rafe was weighed down by a lot of adjectives and long sentences. I think a bit of fine-tuning of prose would have created a more engaging beginning.

At that point, I didn’t have much hope of completing the novel, but once the protagonists reach Kenya, I found myself immersed in the location and its people, and finally the romance. I know next to nothing about Kenya’s physical, cultural and political landscape in the 1970s—what little I know is superficial—so I don’t feel adequately knowledgeable to examine the authenticity of Fielding’s perspective. That said, what is striking is how I felt a genuine sense of place. Fielding knows what she’s talking about, through the nuances of local customs to the harsh and enchanting terrain of the country. I’m glad to say there is not much evidence pointing to overt romanticisation or exotification of the actual place, and its culture and people (Rafe himself derides such notions to Coral), but as to the protagonists’ propensity to romanticise their own points of view? That is the bulk of the story.

It’s not all dreamy talk of the land—Kenya remains a backdrop to the blossoming of a sweet and perhaps overly complicated relationship. Indeed Rafe and Coral’s road to romance is often as superfluous and as changeable as a soap opera. (That’s not to disparage soap operas, but this is certainly something to keep in mind!)

A photographer based in England, Coral is returning to her birthplace in Kenya after discovering her father has died there and has left her an inheritance. She meets Rafe by accident at sea and is immediately struck by the mysterious stranger’s appeal, but doesn’t imagine they will meet again. To her disbelief, she soon finds out that Rafe was actually a good friend of her father’s, and is apparently having an affair with her stepmother, and is also apparently after her inheritance. Of course, there is much more to Rafe than meets the eye.

Coral has more beauty, brawn and brains than your average 1970 heroine, but I still wanted to knock some sense into her. We see much time spent on Coral’s introspection and churlish jealousy and insecurity. She is constantly torn between her attraction to Rafe, his supposed womanising and conspiracy, as well as her loyalty to her father. These fears are further exacerbated by her childhood nanny’s admonitions and her stepmother’s calculated jibes.

Rafe was a hunter; he liked women, and they drifted to him like butterflies to a lavender bush. He revelled in the courting, the teasing, and the mutual seduction. He was wrong for her, and that must be the end of it.

Thankfully, Rafe is mostly atypical of his seventies hero counterparts, keeping the douchebag level relatively low. He sweetly courts Coral, but he too is at a crossroads between the burden of his Dark Secret and his intense attraction to Coral. Still, that doesn’t stop him from forcibly coaxing Coral into his embrace now and again. Just when I think he can’t commit a worse case of douchebaggery, he curbs himself, becoming tender and affectionate again. His motivations for not pursuing a relationship with Coral turn out to be pretty contrived, but both his and Coral’s loneliness are palpable. I wished he and Coral would just get their act together sooner.

Rafe was silent for such a long time that Coral sneaked a glance at him. His face was set, a small vein pulsing at his right temple just visible. Apparently sensing her scrutiny, his eyes crinkled into a smile, which she found rather sad. “Hey, rosebud,” he said in his usual amused tone. “Don’t look so alarmed.  I’m not a mad dog, even if I do growl from time to time.” They laughed, and she assumed she had imagined the sadness.

Rafe’s and Coral’s misunderstandings, passions and prolonged angst are drawn out in sweltering, hyperbolic fashion. Just the way I like it.

“Why are you always so quick to condemn me? What do you know about me, Coral?”

“Then tell me about yourself. I only know what you have shown me. I want to know everything. I think I’m falling in love with you.”

No melodrama is fulfilling without a colourful cast of supporting characters. What would it be without a jealous lover or two, a spiteful stepmother, a superstitious and sage housemaid, shrewd and bored ex-patriate friends and an arrogant ex-fiance, topped off with near brushes with death (by snakebite, by malaria, and by a car crash)?

As tiresome as the high drama can be, there is a languidness and occasional poetry to the prose and pace that I thought was unique and refreshing. I felt like I was reading a hybrid of old school Mills & Boon stories and glamorous Golden Age Hollywood/European films, but with more punch and a generous word count. It might evoke the feeling of an old-fashioned romance, but make no mistake: Burning Embers sure does simmer with tension, mixed in with restrained love scenes. Nothing outrageous, but just enough to appease a contemporary reader.

Aside from the wobbly beginning, Burning Embers paints an evocative and compelling picture of Kenya and the story’s almost star-crossed lovers. Although the obstacles Rafe and Coral cross to reach their happy ending are contrived—seriously, the convenient near brushes with death are almost farcical—it’s interesting to see how seamlessly the landscape reflects their kaleidoscopic moods. I’m glad I persevered because this turned out to be a unique and enjoyable story.