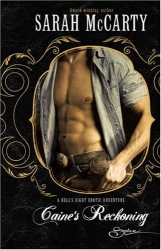 In the middle part of the book, I was underwhelmed by some of the conflicts. I mean, Desi versus a rooster? I can see how her character was changing, but I wish it had been done in a less frivolous way. Or maybe written in a darker way. I expected tears and chills and, at the end, relief; instead, I got a reasonably enjoyable feel-good story with villains who were mere shadows against the very alpha, do-no-wrong hero and his mates.

Finally, I didn’t feel that the language in the book reflected its historical context, but I don’t really know much about American westerns, so I could be wrong.

Despite all this, Caine’s Reckoning is still a decent read, and it wouldn’t be a bad introduction to the romance genre. It’s the kind of book you might secretly read in high school and keep forever. Click here for an excerpt.