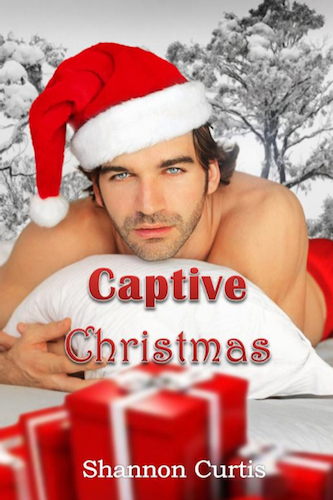 The plot is just complex enough to keep you guessing, and the characters reveal just enough to make the story interesting. The romance still requires suspension of belief, but I'm a sucker for that kind of thing. The plot is just complex enough to keep you guessing, and the characters reveal just enough to make the story interesting. The romance still requires suspension of belief, but I’m a sucker for that kind of thing.

When Australian author Shannon Curtis Twitter crowd-sourced the plot for her free Christmas short story, we came up with some fairly over-the-top scenarios. Many of them were tongue-in-cheek, but Curtis rose to the challenge and not only included many of our suggestions but most importantly, she included a vomit scene.

Seriously, she is awesome.

Nick Marshall is SAS on medical leave after injuring his arm in Afghanistan. As his brother’s best man, he’s on an errand to pick up the wedding rings when ‘five Santas, with white beards and wigs, streamed into the [jewellery] store, brandishing guns’. Holly Maxwell is the lead negotiator when the call comes through that there’s a hostage situation.

But there’s something strange about the case. The negotiations aren’t following the normal pattern. It’s up to Nick and Holly to free the hostages and figure out what the Santas are really after.

I can’t give away more of the plot because there’d be nothing left, but let me say that for a short story this one packs a punch. I intended to skim the first couple of pages before downloading the PDF to my ebook reader, but I was so intrigued that I ended up reading the entire thing on the computer in one go.

Curtis displays a real flair for the short story. The plot is unpredictable, and the lead characters are competent but not humourless:

He had a lot to do today, and not much time to do it. He had a physio appointment later in the afternoon, followed by an agonising rehearsal dinner. Why the hell do you need to practice to eat?

The villains are charming in their own evil ways, and even the minor characters have important parts to play in the story. Curtis controls the plot, the setting, the characters and the pace very well. It’s rare for me to find a satisfactory short story in romance, and this one exceeded all my expectations.

I read Curtis’s debut, Viper’s Kiss, and wasn’t all that impressed, but after reading this short story and the one she wrote for the Moonlit Encounters anthology (review to come; I haven’t finished reading it yet), I’ll definitely have to try her second book.

Captive Christmas delivers everything that a short story should. The plot is just complex enough to keep you guessing, the characters reveal just enough to make the story interesting, and the romance is low-key enough to be plausible. It still requires suspension of belief but, as you know, I’m a sucker for that kind of thing. :-)

Who might enjoy it: Readers who love a fast-paced story but have little reading time to spare during the holidays

Who might not enjoy it: People who still believe in Santa

This short story is available for free and can be downloaded from the author’s website.