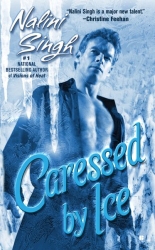 I’ve had this post in draft for ages, and I’ve decided to turn it into a quickie or it may never see the light of day. While Slave to Sensation is still my favourite book in this series, Caressed by Ice is a great read. The Psy hero/changeling heroine combination has a very different dynamic from the pairings in the previous books, and if you like your heroines to be dark, inscrutable and very alpha, you won’t be disappointed.

It took me a while to warm up to the characters in this book, and I had to read it twice to get a better understanding of what made them tick. Judd is a much colder hero, and while I can see how he’d appeal to other readers, I prefer the changeling heros of the previous books. I liked Brenna only after the second reading, because at times I found her irritatingly clingly (though she had good reason to be). I wasn’t certain how Singh was going to resolve the very huge problem of Judd’s need for the Silence protocol, and I found some of the explanations about how dissonance was affecting him confusing. But the book doesn’t take an easy way out, so I’m happy with the way it was resolved, although I would have liked to have understood Judd’s reprogramming of his brain better.

The external plotting in this series is improving, and Singh makes good use of it to introduce other changeling packs. I like the way Singh creates subplots that are fully resolved in each book while keeping other threads unresolved for the main series arc, but in a way that doesn’t feel like sequel baiting. Click here for an excerpt.

Slight non-sequitur: Hawke. Hawke is yummy. There’s much speculation about his future mate, although I think all arrows (heh) are pointing to Sienna. As I commented on another blog, alphas don’t always behave the way I’d expect, so I don’t know if I’m reading the clues right. The age difference bothers me a bit, but there were some hints as to Sienna’s abilities that might balance it out. As to the mating thing, is it possible that Hawke feels something but knows she’s too young, which is why he’s grumpy all the time? :-D Anyway, an even better story would be that Hawke really wants a Kat!