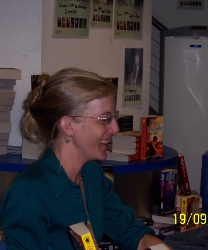 Decadence gives us a run-down of Carrie Vaughn’s visit to Galaxy last Sunday.

Spoiler warning: So much happens in each book to further Kitty’s development that even reading the blurb on later books constitutes a spoiler. This post contains spoilers from the Kitty Norville series.

When I heard that Carrie Vaughn was coming to Galaxy for a signing, I visited her website and found an excerpt (click on the Werewolf Psychologist link and scroll down to ‘Dr. Kitty Solves All Your Love Problems’) that sold me on Kitty and the Midnight Hour, the first in her werewolf Kitty Norville series, which I liked so much, I glommed the rest of the series. This is a really good time to do that, with eight books published so far.

I arrived at Galaxy early and was the first one standing in line when Carrie Vaughn arrived earlier than expected. After having worked in a bookstore where the staff can panic if there’s only five minutes left before a signing is supposed to start and the author hasn’t shown up yet, Carrie makes an effort to get there early. So I was able to get a few minutes one on one with her.

I opened by thanking her for not killing Cormac, my favourite character. Her reply was that he doesn’t die and he will return to the series in Kitty Goes to War, book 8. (At this time, I’m near the end of book 5). I have the impression that he is popular with other readers as well. I enjoyed having scenes with Cormac, Kitty and Ben together, so the book after Cormac was sent to jail was the slowest one to read because I was still in mourning for him, even though he hadn’t actually died.

She sent Cormac to jail because she feels that was the only plausible thing to do. She has talked to cops and learned that within a day, most of the time, the cops know who the murderer is and the ones who get away with it only can due to a lack of evidence. A case can only be tried once, so if the defendant gets off, that’s it. Most of the time, cops try to make sure that there is so much evidence that a plea bargain is reached and the case never sees the inside of a courtroom. A trial is costly and there is the risk that a murderer can go free. Evidence is what puts them in a cell. So odds are high that an assassin will get caught sooner or later, which is what happened to Cormac.

In her research on real wolves, Carrie noted that the alpha isn’t always the strongest wolf but the best at keeping the peace and delegating to other wolves. We discussed how a lot of urban fantasy focuses on sheer strength saving the day. It can be quite dark and the werewolf always loses out to the vampire. By contrast, Kitty is more of a charismatic leader and an optimist. Carrie likes being different.

I told her that I got into paranormals because of vampires and since there is so much vampire romance to keep me happy, I’ve overlooked werewolves, despite their animalistic passion. She feels that they get the short end of the stick, especially compared with vampires.

I talked to Carrie about how so much happens in each book to develop Kitty’s character that you basically can’t even read the blurb two books ahead without spoiling the book you’re reading now. She tries to write them as stand alone stories, but there is a larger story going on and readers would benefit from reading them in order. (I think they’re stand alone in the sense that Carrie doesn’t sequel bait, but I strongly recommend reading each book in strict order without skipping ahead.)

She’s had complaints from readers about Kitty starting off in such a submissive position, but it gives her a lot of room to progress through the series. It always made sense to me even though it was an abusive relationship, that Kitty had been hit for such a loop that she needed the space to feel safe before she could deal with what happened to her so suddenly. Carrie says that it’s something that people can relate to because things happen in life that can hit us hard. The main thing is that Kitty realised that her relationship with Carl and position within the pack weren’t working for her.

As I was the first in what was at the time a very short line, I was able to get the whole series signed. :) But a crowd formed while my eight books were being signed so I had to quickly get a photo of her so I wouldn’t hold up the new line any longer than I already had.

Everyone who had lined up was able to get a photo with Carrie and ask her questions about her books. When the last person had left, Sofia took Carrie shopping in Galaxy. She sometimes misses her old job in the bookstore because she and her customers always had at least one thing in common—they all love books.