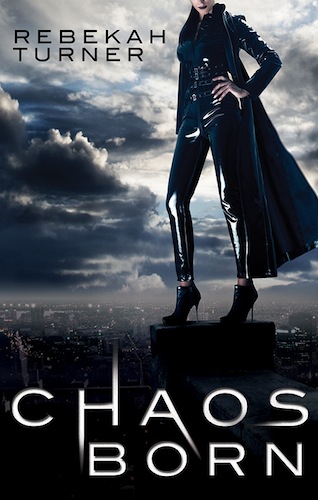 A fast-paced, well-written urban fantasy with a flawed by charming heroine. There isn't much romance in this book, but if you like a lot of action and aren't put off by a high body count---usually by decapitation---then it's a promising start to a new series. A fast-paced, well-written urban fantasy with a flawed but charming heroine. There isn’t much romance in this book, but if you like a lot of action and aren’t put off by a high body count—usually by decapitation—then it’s a promising start to a new series.

First, a heads-up: this isn’t a romance. There aren’t even really any romantic elements, although there may be hints of it for the overarching series. Escape Publishing markets itself as a romance imprint, so I’m assuming that Chaos Born is one of those genre-bending stories and that the romance will eventually pick up in subsequent books.

With that out of the way, I’ll admit that I haven’t read much urban fantasy of late, so I’m not the best judge of what’s merely derivative and what’s fresh. All I know is that I couldn’t put this book down.

Lora Blackgoat is a smuggler and mercenary for whom things haven’t been going all that well. Her last job—an exorcism—went bad, and it’s all she can do to get a decent job these days. Plus, she’s wanted by a loanshark and a thug who wants to avenge his brother’s death. When an old friend asks her to look into some suspicious deaths, Lora ends up in it up to her neck in trouble (not that she’s ever really out of it). Worse, her questions seem to be leading her to the Order of Guides, a kind of magic police force that regulates the use of magic, specifically the darker kind.

What interested me most about Chaos Born is how author Rebekah Turner constructs her protagonist—an unapologetically flawed heroine who gambles, drinks, fights and swears with the best of them. Lora isn’t your typical urban fantasy bombshell heroine. In fact, she’s not considered all that attractive in her world. She limps, she sweats, and she doesn’t always make the best decisions. I was initially wary of yet another snarky urban fantasy heroine, but Lora turns out to be quite charming—a fighter who gets very hurt, somewhat impulsive but not stupid—and she takes her fate into her own hands. She can be crude and kind of gross, but she also displays a subtle, sometime unexpected, sense of humour, as do the characters around her.

‘Do you know anything that isn’t just a rumour? Why do people think it’s a man?’

‘Only a male could have such bad taste to eat feet. Toes are disgusting.’

In the sexy stakes, Lora isn’t a slave to lust, but neither is she immune to nostalgic yearning for a childhood love, booty calls and inappropriate lusting at dire moments:

I kept my mouth shut, hearing some footsteps pass us. When they faded, Roman didn’t move back and I felt his eyes steady on me. His skin radiated a warmth that made my fingers itch to touch it, his scent spicy and erotic in this darkness. A warm sensation bloomed between my thighs. Unbidden, my mind flashed up images of Roman’s hands on my skin, caressing  me in all the places that mattered. My hands nearly reached for him of their own accord. I tried to get myself under control, tried to distract myself by thinking about something gross and unsexy.

I nearly vomited in my mouth, found I was under control again. I let out a shaky breath, wondering what in hellfires had just happened. Getting turned on at a moment like this was rather distracting and unwelcome.

For me, the best part of the story is in watching Lora try to break free of the shackles that people—mostly men—around her keep trying to impose on her. She rarely does it gracefully, but that’s part of her charm.

I’ll chalk it up to first-book-in-a-series syndrome, but the mythology needed more room to breathe and develop. At times, I tended to skim through because there was so much action; there was no invitation to slow down and soak it all up, and by the end of this book, I felt overloaded with new characters and new beings.

Fortunately, I’m not someone who pays attention to world building when it comes to urban fantasy (mainly due to the pacing problem, which seems to be prevalent in the genre—or, indeed, a feature of the genre, in which case the problem is actually me). I like to let the magical elements kind of wash over me, and unless something jars me out of my happy escapist place, I don’t really care who’s an angel, who has horns and who turns into a turtle. There are parts of the narrative that felt a little dense to me, so I skimmed them. I think I managed pretty well, and it was easy to pick up the story even without fully absorbing the different types of creatures, magic and gadgets in play.

I had a few other quibbles. Some aspects of the plot feel forced—there’s a mystery around Lora’s broken amulet, and I found it difficult to believe that it took her so long to ask about it. The book also suffers from typos, and because it’s a longer book than most of the other Escape launch titles, I couldn’t really ignore them. Finally, the story is written in first person, which is fine, but I felt that it would have worked so much better in the present tense.

A fast-paced, well-written urban fantasy with a flawed but charming heroine. There isn’t much romance in this book, but if you like a lot of action and aren’t put off by a high body count—usually by decapitation—then Chaos Born is a promising start to a new series.

Who might enjoy it: Urban fantasy readers who love a fast-paced story

Who might not enjoy it: Readers looking for romance