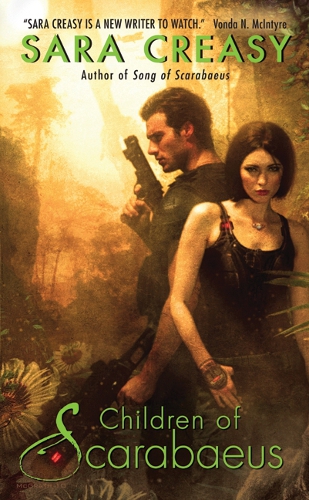 Not quite as compelling as the first book and the romance is underdeveloped, but still a satisfying conclusion to the Scarabaeus duology.

When Edie is recaptured by the Crib, she discovers they’ve been grooming four Talasi children to become cyphertecks for her former mentor’s pet project, Project Ardra. Edie is torn between her freedom, her obligation to free Finn, her desire to save the children, and as she learns the motives behind Project Ardra, to find a way of preventing colonised planets turning into uninhabitable mush.

This book is a continuation of the events in Song of Scarabaeus, and it’s best to read the books in order. Unlike its predecessor, Children of Scarabaeus relies on a series of smaller arcs and plots to keep the momentum going. The pacing isn’t as strong, nor are the conflicts as compelling. There are a lot of antagonists, and they’re not all well developed enough to be interesting.

There’s a bit of deus ex machina in the resolution, which is disappointing given that, for the most part, it wasn’t easy to predict how the story would go. The world building in this book also becomes mired in twists and complications.

The romance between Edie and Finn is properly resolved in this book. Creasy isn’t writing a romance novel here, and that’s obvious. The romantic tension between these two characters sometimes comes across as shallow, and the consummation of their relationship isn’t as thrilling as I was anticipating. The lack of insight into Finn’s point of view weakens the romantic arc noticeably.

Nevertheless, Children of Scarabaeus is a satisfying conclusion to the Scarabeus duology. Creasy has plenty of scope for future books with the remaining cast of characters, and it’ll be interesting to see what she comes up with next.

Not quite as compelling as the first book and the romance is underdeveloped, but still a satisfying conclusion to the Scarabaeus duology.

Who might enjoy it: Readers who need to know if Edie and Finn get their happy ending

Who might not enjoy it: Sticklers for hard science fiction