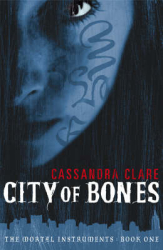 The start of a fun, addictive series for YA readers. Or you can watch the film instead.

Clary Fray heads to a club with her BFF Simon and witnesses three tattooed teenagers take out a boy…who then disappears! While searching for an explanation, she gets a call from her mum telling her not to go home. Frantic, Clary rushes home to find demons and is saved by one of the tattooed teenagers. She later discovers she is one of the Shadowhunters, a group of supernaturals descended from angels, who protect the world from demons. Her history is tied to theirs, and to the Mortal Cup, which is the reason why her mother has disappeared.

I will admit to buying this book because I knew there was a movie coming out and was glad that I did. I really like this series and this book in particular. It was fun and entertaining and I felt it had a fresh voice, in that while all stories are essentially the same, she managed to tell this one in a different way.

Clary gets a whole lot of shit thrown at her right off the bat, and while she might not manage to get through it with complete grace, get through it she does, with resilience and less moping about than certain dramatics (ahem, Twilight) that I know. I also liked the authenticity of the characters’ voices—Jace, the hero, and Simon, Clary’s BFF, both have the funniest quips and banter that make them sound like real teenagers. (Yes, there is a love triangle, but it gets resolved with maturity and not deus ex machina in book 2!)

I also like how author Cassandra Clare said, in one of her interviews, that it was important for her to have her characters pass the Bechdel test:

I wanted to make sure that every book passed the Bechdel test – you know, are there two women in it, are they separately named, do they sit down and talk, and do they talk about something other than a guy? So I wanted to be like, yes, every one of these books passes that test.

This was another thing that motivated me to read the series—real relationships.

I thought the mythology and world building were imaginative. This is a teenage urban fantasy world that wouldn’t be out of place in any grown-up romance novel that I read. The prose is descriptive and rich in history and detail, and I appreciated the research that went into making this series.

Adventure-wise, the plot moves right along and you get to the end fairly quickly. At some point I felt like an old nana thinking, God I would be really tired by now. I’m so glad they’re supernatural or else I think they would’ve keeled over from being tired. (Note: the characters can draw magic runes on their skin to give them extra powers like strength, and there is one for energy for when you’re tired! I would like that with my coffee every morning, thanks.)

I am not going to tell you what happens other than there’s a mega-twist at the end and it’s not a happy ending only because there are more books in the series that you have to read! (Well played, Ms Clare!)

If you’re wondering where you heard about Cassandra Clare, she wrote The Very Secret Diaries of Lord of the Rings on Livejournal, back in the day, which was utterly hilarious. I’m glad she got the chance to write her own series and that it’s proven to be quite popular.

This is a fun series. I pretty much finished the first book and dove right into the next and the next and the next. It’s quite addictive. Later on, there’s more romance and angst and somewhat dramatic soap opera-like plot twists, but it works. Or you can see watch the film, which was well adapted, in my opinion, as it has all the key plot points and moves at an even faster pace than the book. (But then you’ll end up getting the next books anyway, because the movie has exactly the same cliffhanger! Just so you know…)

Who might not enjoy it: People who have seen the film…but you might want to read the next book in the series

Kat’s note: This book may have origins from earlier works of fan fiction that were the subject of a plagiarism debate. You can read the details here (warning: extremely long — budget a couple of hours). My understanding is that City of Bones does not include any of the contentious passages.