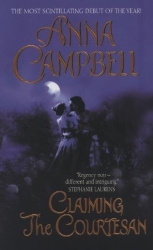 Review of: Claiming The Courtesan

Campbell traverses a risky emotional course and produces some powerful writing. But if you have issues with forced seduction, give this one a miss. Update: A shorter version of this review won the Reader Challenge award at the 2009 Australian Romance Readers Convention. Thanks to everyone who voted for us!

I wasn’t planning to read Anna Campbell’s highly controversial debut novel. Wandergurl refused to take one for the team, and I get very disturbed by rape scenes, so I wasn’t willing to risk it. But when I read the excerpt to Tempt the Devil and I found a copy of Claiming the Courtesan in Elizabeth’s Bookshop, I finally took the plunge.

So let’s get it out of the way: yes, he rapes her. More than once. And no, Campbell doesn’t sugarcoat it.

Justin Kinmurrie, Duke of  Kylemore, has been obsessed with Soraya for six years. After being her protector for a year, Kylemore is still no closer to understanding his notoriously beautiful mistress. When his mother tries to manipulate him into marriage, Kylemore instead proposes to Soraya … who refuses him.

Because, in fact, Soraya—Verity Ashton—is determined to leave behind her career as a courtesan to live a nondescript life. Destitution had given her no real choice but to accept the protection of a wealthier, older gentleman, but she always planned to leave the demimonde to live quietly with her younger siblings once she had enough money to support her family.

But when Kylemore finds her gone, he is enraged, convinced that she was out to cheat him all along, and determined to punish her for deserting him. In truth, his rage is a combination of obsession, desperation that she can keep her distance when he himself is consumed by her, and the inability to understand the emotional barriers that Verity has built to keep her essential spirit unharmed by what she has had to do as Soraya.

…his hands were gentle as he lifted her from the saddle.

She hardly seemed to hear him, but she trembled under his hold while she found her balance.

He frowned. What was the matter with the chit, for God’s sake? He knew she was afraid—he’d set out to make her so. But it wasn’t as if he planned to do anything to her he hadn’t done before. Or did she imagine he really intended her harm? If he’d wanted to murder her, it would have been considerably more convenient to do it back in Yorkshire.

Kylemore kidnaps Verity and spirits her off to a remote estate in the Scottish Highlands. Unable to understand that the Soraya he knew no longer exists in Verity’s mind, he takes her against her will. And yes, they are rape scenes because Verity clearly and explicitly refuses consent. I wouldn’t consider them physically violent, but at times I felt nauseated reading these scenes, not because Verity felt physically violated—Kylemore becomes increasingly determined to make her enjoy herself physically—but because of the emotional turmoil that Verity undergoes and which Kylemore is unable to comprehend. In his mind, Soraya is a creature of pleasure, so he can’t see why his attempts to make the act pleasurable for Verity in fact drives her even further away emotionally.

He’d come to realize Soraya was in many ways a falsehoood. Soraya was at ease with her gorgeous body and with sexual pleasure. Soraya was a creature addicted to luxury who would recoil in fastidious horror at the privations of this journey. Soraya was endlessly compliant to a lover’s demands…

Verity, on the other hand … guarded her chastity like a miser guarded his treasure… Every time Kylemore touched her, she looked like she wanted to cry. Or bite and scratch at him like a wild cat. Soraya had certainly bitten and scratched upon occasion, but only as part of her repertoire of love games.

Verity is no stranger to untenable choices, and she’s alternately desperate, resigned, angry, despairing, and yet at no time did I feel she was repulsed by Kylemore. She comes close, I think, just before the emotional tension breaks and we get an insight into Kylemore’s own demons. Verity tries to shut out the part of her that existed as Soraya. This emotional split has allowed her to commit acts in Soraya’s name that Verity would find unbearable. But in Kylemore’s hands, Verity is forced to come to terms with the fact that she’s both Verity and Soraya, and in a sense to forgive herself for what she’s had to do to survive.

The power dynamics of sex

If I’d read this book maybe 5 years ago, I probably would never have finished it. Even now, if I’d gone into it without knowing what to expect, I might still have abandoned it after the first rape scene. But I made myself persevere, knowing that some readers have found the payoff satisfying.

As I read through the darker scenes, I was reminded of this post over at debauchette (the bit under the first asterisk) (WARNING: NOT SAFE FOR WORK—believe me, it’s NOT). The comments for that post echo my ambivalence on how Campbell has chosen to play out the conflict between Verity and Kylemore. After rereading debauchette’s story, I’m even more convinced that Campbell may have overplayed her hand in showing Verity’s unwillingness to have sex with Kylemore. The emotional violence that Campbell portrays in Verity is so strong, and Kylemore’s motivations so self-centred, that it’s difficult to see the encounters as anything but despicable and indefensible. (As an example, I thought that Bastien borderline rapes Chloe in Black Ice, but he at least had a powerful motivation outside of lust and the need for power.)

As Verity and Kylemore are forced to confront each other and their own selves repeatedly, they become aware of the way in which the other has been shaped by past events that they were incapable of controlling. Verity sees Kylemore at his most vulnerable, and compassion helps her overcome some of her anger towards him. Kylemore learns of Verity’s past and finally realises that his attempts to control Verity have exacerbated her emotional trauma. And even as they negotiate a relationship in which both can give as well as take, there’s an underlying sense of despair that, in society’s eyes, Verity can never be anything but an illicit partner for a duke, yet there’s no way she could bear to live as his mistress once he does marry. But for some reason, this sense of doom is only seen through Verity, and even if you argue that Kylemore refuses to let social opinion affect his feelings and intentions, it seems highly insensitive to remain indifferent, knowing that Verity will bear the brunt of any potential scandal.

Was it satisfying for me?

Yes with caveats. The powerful writing during the first part of the novel overshadows attempts to redeem the hero in the second half. On one hand, I admire Campbell’s honesty in writing the darker scenes. On the other hand, they’re so powerful that it’s difficult to imagine how Kylemore can be forgiven (by Verity but also by the reader). I had the uncomfortable sense that Verity never gets to the point where she’s able to properly release the anger she builds up against Kylemore, and that the way she comes into self-awareness is contrived—a disappointing contrast to the brutal honesty of what she endures in Kylemore’s hands.

Finally, rather than having such an over-the-top conclusion to the story, I would have preferred for Campbell to take more time redeeming Kylemore, resolving the emotional conflicts between the main characters, and showing how they plan to deal with the pressures of society.