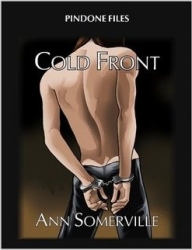 Because who could resist that cover? Seriously.

When I was offered the chance to read an M/m romance by Australian author Ann Somerville, I scrolled through her website and the book with the shirtless man in tight black pants with his hands cuffed behind his back brought out my inner cover tart.

One Brief Encounter is told mostly from Dekan hon Cerimwe den Tsikeni’s point of view. Dek met Rensire hon Parmin den Vizinken in a bar while visiting Ren’s home region for police training and they had an immediate connection. Dek’s serious, military bearing is balanced by Ren’s cheekiness and Dek’s dominant nature allows the empath to leave behind his own headspace (which is often shared with the feelings of those around him) and recharge his emotional batteries. Ren has the confidence of knowing he is generally admired and having the advantage of seeing into others’ feelings, but Dek is tough from having lived through some pretty major personal and professional disasters and keeps himself in control because anything else is simply unacceptable to him. They are a good fit—Ren takes a more relaxed and easygoing view which contrasts well with Dek’s regimented stiffness.

After an incredible night together, they agree to meet up each year when training is held. Unfortunately, Dek is injured in a mission and misses their next rendezvous. He thinks it’s for the best because he thought about Ren too often anyway.

On his return to work, his supervisor orders him to show around a promising young empath/telekinetic who is interested in applying for a job in their team, and he is surprised to see Ren. The connection isn’t lost between them despite so much time apart, and Ren is forced to choose between following the direction of his career by applying for the job and exploring the connection between this hardened, haunted man, as regulations prohibit fraternisation between cops.

A House is not a Home

A House is not a Home is mainly dominated by Ren’s POV (point of view). He has joined Dek’s team and has become his partner, but struggles with behaving appropriately in public, particularly when, as an empath, he can sense how frequently and intensely Dek wants him. He is impressed by Dek’s performance as a Defence Force officer and gains understanding of Dek’s demons.

Today is the anniversary of Dek’s wife’s death and even though he’s a real bear with a sore paw, Ren won’t take no for an answer and insists on helping him find a way to handle his grief. When Dek relives his wife’s death, Ren uses his empathic talent to lessen the load of Dek’s suffering without diminishing his feelings for his wife.

After their first encounter, it’s clear that Ren finds more than just sexual satisfaction from being with Dek, as D/s sex offers a reprieve from the stress of his talent, but here we see how being with Ren can be good for Dek’s wellbeing. Their relationship has become more complementary and solidified my feeling that these men belong together.

But all this is background for Cold Front, which alternates between Dek’s and Ren’s POV. Two years later, they are secret lovers on a regular basis and still partners in the defence force. Their case is a serial killer mutilating impoverished young girls. The body of an empath was found nearby with no obvious cause of death, and Ren is sure that the two victims must be connected—and not just because they were found in the same vicinity—but their orders are to focus on the girl’s killer and the empath is swept under the rug.

This places strain on their relationship because Ren comes off as being rash and overzealous in his desperation to be heard, which discourages his superiors from listening to him, and he blames Dek for not backing him up, while Dek is able to see that no one will listen until they can present enough evidence linking the two cases, even if they’re technically not allowed to look outside the case their task force is assigned to.

The writing, particularly in Cold Front, is very heavy on dialogue, which is effectively used to keep the flow of the investigation going and further the world building. The first person narrative is used to express either Ren’s or Dek’s thoughts or summarise slow points in the investigation to maintain pacing. And to be honest, that is needed. Progress on the case is frustratingly slow, but that’s appropriate for a serial killer worth a task force run by our heroes. This isn’t an episode of CSI where the murder is solved neatly within an hour and a single sample of trace or DNA leads directly to the killer’s door. This killer is smart and adept enough to cover their tracks better than most and provides a compelling challenge for the most dedicated and competent of detectives.

Even when they work out who the killer is, it’s not a simple capture and the stakes are very high. The pace suddenly picks up tremendously after all the waiting and I stayed up a lot longer than I should just to make sure everything ends well.

Even though the place names, units of measurement, police ranking system and beverages don’t give any frame of reference within the world, it’s nowhere near as disorienting as I expected because the story is very much character driven. It’s clear from the handling that Somerville doesn’t want to distract her readers with complicated world building, and this strategy meshes well with the typical male economy of language used in the first person narrative and made even more concise by their law enforcement backgrounds. She’s not selling the world—it’s about the connection between the two men first and foremost.

The lack of scene setup actually made the characters’ POVs more accessible for me. As an example, when I leave work in the evening, I’m much less likely to think about the pretty tree across the road and all the restaurants nearby than, “Shit, it’s cold out here!” And that’s what they do, too.

The switch between Dek’s and Ren’s POVs can be a bit confusing, because this is usually indicated by a scene change, but a scene change has other purposes as well, such as fast tracking to the next relevant event. The vast majority of the time, the scene change achieves both objectives at once, but for the other times it’s a bit jarring to think you’re reading from one person’s perspective only to find them referred to in the third person and realise that you’re actually reading as someone else.

Even though the story is largely written as an urban fantasy, there are some definite elements of romance. Although the murder case is the vehicle for the story, the relationship between Dek and Ren actually is the story and their efforts in solving the case strongly affect their relationship.

On the other non-romancey hand, there were a few references to them both having sex with others with no other purpose than to cover up their illicit relationship and preserve some distance while they deny how much their relationship means to them. Those occasional references weren’t my favourite parts of the story, but that’s my issue and, having said that, it comes up very infrequently and there’s no mention of who those people are since they don’t play any role in the story.

But given Ren’s apparent lack of jealousy over these sexual partners and the women their colleagues keep throwing at Dek, it’s surprising that he resents Dek’s rapport with their superior, Hadin. It was inferred that Ren notices they share an adherence to rules and procedures to a far greater extent than he would and that may make him feel like the odd man out, but it feels strange that he seems to have no problem with Dek having sex with others but feels jealousy towards someone with whom Dek has a platonic relationship.

I also would have liked more sex scenes throughout the book and felt that a few opportunities were missed. The best example was after another victim is found. Ren and Dek cop verbal abuse at the wake and they return to Dek’s house for sex. I felt cheated by getting the 1950s fade to black after Dek gives Ren the order to kneel, before the new scene opens on a discussion of stained clothing and a sore arse. Somerville certainly hadn’t shied away from writing sex at other times in the story (thank god!) and given the lack of progress they were making on the case, I would have enjoyed the temporary departure as much as the men did.

Well, maybe not quite as much as they did.

This book contains both and Somerville takes great care to differentiate between the two. Ren compares the killer’s selfish pleasure in forcing pain on helpless girls and notes that it is a world away from what Dek does to him for their mutual pleasure. Ren knows that he is able to say no if Dek wants something more than he is willing to give and that a large part of Dek’s pleasure comes from his.

The killer enjoys inflicting pain on someone who cannot prevent it from happening and takes a strong interest in the amount of damage their victims can endure before death. And whenever a victim gives out, there’s always another one to take their place, whereas Dek asked Ren at the beginning of their first night together what his limits were and treated him as an individual while in his care.

While the killer targets young, underprivileged girls, who are arguably among society’s weaker members, Ren is actually bigger than Dek and is not only similarly trained in fighting techniques but also has the ability to kill with a single touch. By contrast, Ren is powerful enough to be able to say no and back it up if necessary.

Cold Front is definitely worth a read, although strict romance readers may not enjoy it as much if they don’t also enjoy forensics and police procedurals because this is a major part of the story and the romance may seem to take a backseat as they have to keep their relationship hidden at work. But even when they’re not in bed (or the shower), Dek and Ren make a very good team with complementary strengths and weaknesses and mutual respect. Their chemistry goes beyond sex and it made me want to see them together for the long haul.

You can purchase this book from Lulu, or download an electronic copy of the stories directly from the author’s website.