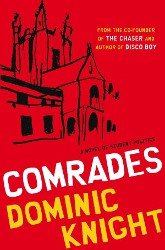 Knight’s witty insights into politics and uni life is fun to read and brings back memories of uni, but I'm not always sure whether Knight is laughing with me or at me.

Dominic Knight’s second book has everything I love about his writing, but the subject matter—student politics—may limit its appeal for many readers.

Knight’s debut novel, Disco Boy, made it to my keeper list, so I was excited to get my hands on his next book. Comrades is a semester in the life of Eddie Flanagan, outgoing Student Representative Council (SRC) president, as he tries to reconcile his ideals with the reality of the political system.

Comrades was an interesting read but a bugger to review. Knight’s wit doesn’t disappoint, and there’s a gentle romance in the story that I found irresistible, but there are aspects of the book that other readers may struggle with.

As outgoing SRC president, Eddie has an enormous influence on who becomes the next presidential nominee for the Labor ticket. Sunita Shahane is lobbying to be his successor, but Eddie becomes increasingly uncomfortable at the lengths she’ll go to get the top job. It’s a crazy world when Left Alliance candidate Pema Adams looks like she might actually give the major parties a run for their money—so much so that Labor contemplates a preference deal with campus comedians and, worse, the Liberals.

A couple of chapters in and it’s clear that Comrades doesn’t have the same broad appeal as Knight’s first book. There’s a lot of detail around student politics that even someone like me with a passing interest in how it works may find themselves slightly lost and, frankly, indifferent to the issues faced by the characters.

The number of [SRC] delegates had grown in proportion to the university’s rapidly expanding population, and now contained a record 43 members. While it sounded impressive, it meant that a lot of people with only minimal commitment got elected … [who] never condescended to turn up to its monthly meetings. To combat this, the SRC had begun providing free Turkish pizza [for its members]…

The story is told mainly from Eddie’s point of view, meaning there’s quite a bit of Whitlam love and conservatives are generally portrayed as a bunch of unscrupulous, conniving rats. If this doesn’t align with your politics, you’ve been warned.

That said, Knight has some equally damning things to say about the progressives:

The sad fact was that most of the genuine members of the working class enrolled at the University of Sydney had no time for student politics. They were far too busy actually working.

although I do think he’s much kinder to—or at least much more tolerant of—them.

The book is set in 2000 before the Howard government made student unionism voluntary. This dates the book a bit, but Knight provides insights into the issues around VSU that I hadn’t been aware of at the time. The book also talks about some characteristics of the Labor Caucus, which became much more interesting when I reread the book after Rudd lost the prime ministership and just before the elections.

Much of the humour and wit in Comrades seem tightly woven to its particular setting. If you don’t know or care much about Sydney Uni or about Australian party politics, you may not get many of Knight’s digs. I also often felt there were in-jokes that I was missing.

As with Knight’s first book, I wondered how much of Comrades was based on real events. Quite a bit, I suspect. And I desperately want to know what really happened. As an undergrad at Sydney Uni I was a faithful reader of student publications, where accusations of election shenanigans were sometimes alluded to, and some of the events in the book seemed familiar. It was very frustrating, mainly because I’m nosy.

Knight captures—and doesn’t miss opportunities to take the piss out of—the idiosyncrasies of Sydney Uni students and campus life. (For example, when trying to decide if she would nominate for the president ticket, Pema reflects that the idea of a particularly self-righteous and lazy colleague running for the job ‘made her consider a fate Sydney students regarded as worse than death—transferring to the University of New South Wales.’) A lot of what happens on campus occurs in the SRC offices and, reading this book, I could almost smell the Wentworth Building.

Things they don’t tell freshers until it’s too late

During my first read of the book, I couldn’t quite grasp Knight’s tone as he pokes fun at his characters and their circumstances. Is it mockery or empathy? After the second read, I figure it’s probably a bit of both. This had the effect of instilling in me  a growing awareness for how totally uncool I was as an undergraduate. It was funny but excruciating at the same time. Mostly excruciating, given that … wait, I don’t even want to admit the uncool things I did as a fresher.

I also feel deeply guilty at having been such an uninformed and shallow voter. Yes, I admit it. I voted for Theatresports personalities—I may or may not still have a campaign t-shirt from volunteering to hand out how-to-vote pamphlets.

So there’s a romance subplot in the story, and because I’m primarily a romance reader, that’s the bit that interested me most. As with Disco Boy, Knight’s protagonist, Eddie, is more of a beta* contemporary hero—my favourite kind.

Eddie marched down City Road towards Broadway, so angry that his hands were clenched, rather uncharacteristically, into fists. If there’d been anything nearby he could punch without seeming distastefully macho, he would have liked to punch it. He wouldn’t dream of hitting a person, of course, and he was far too sensible to punch a wall, or a pane of glass. But of this Eddie was certain—if someone had hung a punching-bag on the side of the street, perhaps along with some gloves so that irate passers-by wouldn’t hurt their knuckles, he would definitely have taken a swing at it. By Eddie’s standards, then, he was a tower of seething rage.

His budding romance with Pema is slow and restrained. It’s fun to read a genuine male perspective in romance, especially one who admits he’s not very good at the thing. For example, when he walks Pema home and she puts his arm around him, he’s not exactly sure what to do: ‘Eddie, as was so often the case in his interactions with women, was feeling a little freaked out.’

I wish Knight would write more romance into his books.

* For the uninitiated, the beta is a type of romance hero typified by the nice guy next door. For a more thorough discussion of alphas, betas and gammas, see Rambles on Beta Heroes by Anne Marble on All About Romance (if you click on the link, it‘s just before the halfway mark, after the two-column table).

This book improved on the second reading. As a Sydney Uni undergrad in the late 1990s, I found Knight’s witty insights into politics and uni life fun to read. Comrades brought back memories of uni, but I’m not always sure whether Knight is laughing with me or at me. The story also ends on a strange note, making Eddie’s story feel incomplete.

An uncorrected proof of this book was generously provided by Random House Australia.