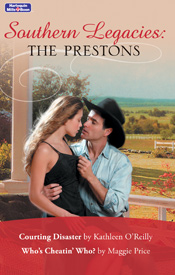 There’s nothing more swoonable than a hero who’s smart enough to say no to a temptress, even if it’s the heroine doing the tempting. A keeper.

A virgin country singer paired with a playboy race car driver hero could’ve been a recipe for disaster, but Kathleen O’Reilly writes some of the best couple dynamics I’ve read in a category romance.

Courting Disaster is the sixth book in the Southern Legacies series, and this is painfully obvious in the first few chapters. The only mildly interesting event in the first 40 pages is a parking accident, which sets up the meeting between playboy race-car driver Demetri Lucas, a close friend of the Prestons, and country-and-western singer Elizabeth Innis, who’s part of the Prestons’ extended family.

Once O’Reilly gets through the series continuity info dump, the book picks up the pace and we’re treated to a romance that’s both somewhat traditional and yet unpredictable.

Elizabeth is a famous singer whose virginal reputation is part of her “brand”, if you will. O’Reilly gives her a back story in which this is plausible if not entirely believable. Demetri is renowned for his womanising ways, until he falls under the spell of The Glittery Hooha, which is basically a phenomenon in romance novels where the heroine has some magical quality that ruins the hero for any other woman, thereby solving the problem of the man-whore hero.

Elizabeth knows that her reputation will suffer if she’s linked to Demetri. Meanwhile, Demetri’s reputation has made his racing team’s major sponsor antsy, but being seen in public with Elizabeth would entice the sponsor back.

The potential for romance cliches is huge for this set-up, but O’Reilly continually surprises. Her characters aren’t stupid, and when one acts a little foolhardy, the other calls them up on it.

Courting Disaster ties with The Longest Night as my favourite O’Reilly novel, and the two have something in common: a smart hero. Not bookish, not witty, not cunning—but smart enough to know when he’s being tested, and man enough to rise to the challenge.

Elizabeth isn’t just a virgin heroine—she’s a heroine who happens to be a virgin, in part because, she reveals, “I don’t want to be one of those music stars that are in and out of relationships, and rehab, and car accidents, and in general, being unhappy. I want to be happy. I deserve that.”

Demetri’s experience with women helps him to say and do the right things when Elizabeth teases and tests him. In some ways he reminds me of my favourite Jennifer Crusie heroes, who understand that the heroine is too valuable to lose just because they let lust get the better of them. There’s nothing more swoonable than a hero who’s smart enough to say no to a temptress, even if it’s the heroine doing the tempting.

“You play pool?” she asked, a challenge in her voice.

“Some,” he answered, wondering where all this was leading. She took a cue in her hand, curled her fingers around the wood, slowly slid them up and down. Even knowing he was being led by the nose, Demetri locked his gaze onto the sensual fingers, and didn’t let go.

“What are you betting?” he asked, his entire body eager and dying to know.

Ten thousand volts shot to his groin and he groaned, only because he wasn’t that strong a man. Demetri smiled tightly. “You should just punch me in the shoulder. I think it’d be easier.” He’d been set up. He knew it. Whatever family problems had happened earlier, Demetri was going to be the one to pay, and it was gonna hurt.

“I’m not worried,” she told him, leaning low, racking the balls on the table with an expert’s hand. Demetri stared straight down her shirt into the creamy white valley of death flanked only by a scrap of black silk. He wasn’t sure if she was out to seduce him or kill him, but he thought either way, he’d die a happy man. He’d seen her flirty, and happy, and mad, and worried, but this one, the temptress, was new, and he was enthusiastic.

“Why aren’t you worried?” he asked, a stupid question, but there wasn’t a lot of blood left in his brain.

She pulled out a tube of lipstick and slicked it on lips that didn’t need makeup, but he knew this wasn’t cosmetic, this was for show. For him. After she tucked the tube away, she pursed her lips. “Because I’m good. Really, really good.”

All remaining drops of blood in his brain disappeared.

Of course, this kind of relationship isn’t sustainable—almost angrily Demetri tells Elizabeth that she wants a dog, not a man—and O’Reilly takes us on an emotional journey that’s thrilling and heartbreaking and, of course, ultimately satisfying.

I usually avoid heroes who are famous sports champions because I don’t really care to learn that much about whatever sport he’s in, and often the sport itself takes up a chunk of the narrative. Not so in Courting Disaster. We only see Demetri on the track a couple of times, both of which are from Elizabeth’s point of view.

Unfortunately, the book contains one of my pet peeves: fictional music lyrics. To her credit, O’Reilly uses them sparingly, but I can’t say I liked it.

The series continuity is the weakest part of the story. The first few chapters are a hard slog as we’re introduced to the Preston family. The Prestons own Quest Stables and are under investigation for fraud. Demetri and Elizabeth are keen to support the struggling business, but the Prestons refuse to take their money outright, so they have to come up with a more creative means of helping out.  Courting Disaster doesn’t do much in terms of the series arc because Elizabeth and Demetri are on the periphery of the Preston family, although perhaps their attempts to help the family will be significant later. Secondary characters meander in and out of the story, and sometimes they distract rather than complement the romance.

Australian vs US version

Because O’Reilly is one of my auto-buy authors, I also bought a copy of the US version of this book. There are some interesting differences:

This novel is filled with dangerous traps for a less skilled writer—the reckless playboy, the virgin heroine, the big misunderstanding—but O’Reilly never lets her characters descend to cliche. Courting Disaster is a keeper for me, and Demetri Lucas may have just become my favourite contemporary romance hero.

The Southern Legacies: The Prestons series is published by Harlequin Mills and Boon in Australia. In the US, the series is branded the Thoroughbred Legacy and published under the Silhouette imprint as a standalone title in the Special Edition line.

If you want the Australian version of this book, you’ll need to be quick. For a limited time, you can buy it from millsandboon.com.au (or the entire series for a discount), K-mart and Target. The links below are for the US or ebook versions.