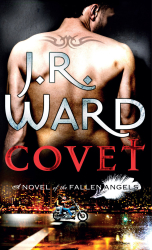 BOOK GIVEAWAY: Read on for a chance to win a copy of Covet. Ends Friday, April 2 AEST.

Jim Heron accidentally dies and is blackmailed by the angels into saving the seven souls (one for each of Dante’s deadly sins) who will tip the balance between good and evil for all time. So, no pressure there.

Vin diPietro is Covet’s romantic hero and the first of the souls Jim must save. Having fought his way to obscene wealth, it’s obvious which sin Vin is most guilty of, and Jim believes that part of his mission is to get him to warm up to his girlfriend and pop the question.

I guess it wouldn’t be too spoilerish (even though she gets no mention in the blurb) to say that the heroine of Covet is Marie-Terese Boudreau, the head prostitute from ZeroSum (Rehvenge’s club in the BDB series), now working at the Iron Mask. Marie-Terese turns tricks to support her son as a single mother while paying off huge debts accrued trying to rescue him from her criminal ex-husband. Although she hates her job and the toll it takes on her physically and spiritually, she feels it’s the best way to earn the kind of money she needs with no strings attached while staying hidden from her ex.

How do the angels compare to the vampires?

Until Ward gets into her stride with Covet, she lightens up on some of her writing idiosyncrasies. She consistently uses fewer. Single. Word. Sentences. But as the story progresses, she ramps up the ‘vernacular’ (which includes nouns used as verbs and particularly strong verbs) and the questions ending in full stops. Even rhetorical questions should end with a question mark, but although I initially thought she did this because her male characters in particular were so alpha their questions were more like statements, this quirk has extended to a minor beta character and actual requests for information by the main characters.

As I mentioned, it takes Ward a while to get into the swing of the story, which I blame on having to establish two heroes, both on separate paths that happen to intersect for this book. The first two-thirds or so of the story focus on Vin’s re-evaluation of his life and his romance with Marie-Terese, her conflict over her job and need to stay hidden especially when men she is seen with at the club start dying, and Jim finding his feet as an angel, but once the battle lines are drawn, the book takes on a more dark and serious tone up to the end. Ward competently balances Vin’s individual romance storyline within Jim’s big picture plot, making Covet a very meaty introduction to her new world.

Although I wouldn’t go so far as to describe Covet as book crack, like the Brotherhood series (which may be more my fault than Covet’s), Ward succeeds in creating a fascinating world quite different from her other series. I think the biggest difference is that the main characters are all new to each other, while the Brothers have decades of shared history that adds depth to how they relate to each other that, appropriately, isn’t quite there in Covet. Also, we don’t actually meet the hero of the next book in Covet, so it looks like the only constant characters to become attached to are the angels, who don’t seem likely to become romantic heroes at this stage. Ward has cleverly left some questions unanswered and room for their characters to be further developed to keep her readers coming back.

Also, the subject matter is heavier in Covet, dealing with sin and redemption where the stakes of the battle extend to the afterlife. This series starts out with a darkness that has only started creeping into the last few BDB books. A major theme is how appearances can deceive and evil can have an attractive shell while a more blatant ‘sinner’ is more honest, and Ward challenges the traditional concepts of good and evil. And where her angels are concerned, good can be just as obnoxious as evil.

There are some similarities that I think must simply be unique to Ward’s storytelling, such as smaller, weaker males being allowed their dignity and treated as though they were bigger, stronger and better able to look after themselves. In Covet, the runt is a little stray dog who becomes Jim’s companion and sapped me out in every single one of his scenes.

As a romantic hero, Vin has some common ground with human Butch. His heart was walled-off until he met Marie-Terese, and while he didn’t give off a bonding scent, he definitely started to thaw. He was polished on the outside with a rough background, but more of a self-made man than Butch and while very masculine, he’s not quite as macho as the warriors. He also shares Butch’s loving concern over how his partner experiences sex.

Ward subtly imbues Vin’s life with a sense that something’s really wrong, even when it looks like he is on the verge of having everything a man could want, but a load he seems unaware of carrying is lifted whenever he’s around Marie-Terese. Despite her occupation, there is something almost pure about Marie-Terese. He’s simply attracted to her and even though he wishes her job was different, he doesn’t judge or look down on her like many men do, which is something that strongly appeals to her after being treated like a piece of meat on the job. For the first time in a long time, Marie-Terese can actually think of having sex with a man in her personal life. Both characters find themselves in very different places than they started out and are reaching a crossroads where their HEA comes about through a combination of individual choice, as well as trust and acceptance from the other, and help from the angels.

I thought having a prostitute as a romance heroine was risky and it’s something I expected to have more trouble reconciling than I did, but I think I was better able to accept it because Marie-Terese was reaching the point where she wasn’t able to keep working and I was subjected to very little of her on-the-job performance. My complaint with her was that she was so determined to punish herself with her prostitution to pay off her debts that she refused help from someone she knew was a good person who wasn’t attaching any strings to their offer of aid (unlike her wealthy but shady ex-husband). She could have chosen to walk away from the job sooner than she did and given she had some awareness of the mounting cost to her soul, I’m not convinced she made the right choice.

Vin himself has a paranormal ability, which is the catalyst for the book’s events, but otherwise appears not to serve any useful purpose. Since Ward typically likes to only include things she feels are necessary to the story, I can only assume we may see him again later in the series.

As Covet is set in Caldwell like the Black Dagger Brotherhood, there is some crossover between the two series. Rehvenge’s new club, the Iron Mask, is Marie-Terese’s place of employment after she moved across from ZeroSum to work for Trez, one of the Moors who were Rehvenge’s bodyguards. Phury and Butch both appear in unnamed cameos, but don’t worry, you’ll know them when you see them. Mick Rhodes from Ward’s short story, Story of Son, and a series she wrote under her real name, Jessica Bird, flexes a bit of legal muscle in Covet as well. And a property rented by one of the Covet characters is owned by a Mr. Perlmutter, who I’m presuming is Fritz Perlmutter, the Brotherhood’s head doggen. I have to admit I got a kick out of the BDB cameos.

Covet showed me that I should have had more faith in Ward. Although I’m not convinced anything will make up for extending the time between BDB fixes, this new series promises to bring a similar flavour while forging its own identity and will help make the wait between books more bearable. I’m looking forward to the next book in the Fallen Angels series for its own sake, even if I don’t expect to become as attached to Ward’s angels as I am to her vampires, which is a huge ask. It’s her own fault for making the Brothers so incomparable, but if anyone stands a chance of creating a world to rival them, it would be Ward herself.

A review copy of this book was generously provided by Hachette Australia. The second book of the Fallen Angels series, Crave, is scheduled for release in the US in October.

For a chance to win a copy of Covet (US edition), tell us which of the seven deadly sins you’re most guilty of and why. (Choose from: Lust, Gluttony, Greed, Sloth, Wrath, Envy, Pride)

Some rules: Post your answer as a comment to this post. Multiple entries are fine. By entering, you give us permission to quote your entry in future blog posts and articles. Overseas readers are welcome to join in. The giveaway ends midnight on Friday, April 2 AEDT. Wandergurl, Decadence and I will pick our favourite answer. The winner must provide a delivery address within 1 week after we announce the result on the blog.