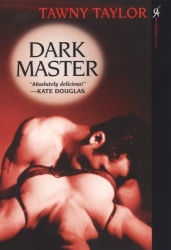 I wanted to like Dark Master, but just couldn’t. It had all the ingredients—hot, dominant male vampire king needs a passionate human female to secure his power base. Lots of potential there, but even though I knew not to expect Vishous, I was hugely disappointed. And since the aspect of the book that I hated, hated, hated and felt disgusted by was something I think a halfway decent editor should have picked up on, I consider it my duty to warn people off this crappy book.

Regan Roslund was a spoiled rich girl who trusted the wrong financier with her inherited wealth and is suddenly left with no money, no assets and no skills, except for a little bondage store left by a black sheep relative, containing a necklace designed to select the next vampire queen, carelessly left on a display waiting to be tried on by poor unsuspecting subs.

Regan was boring and had no real personality, but I guess that might be explained by having to stand on her own feet for the first time in her life, and I wasn’t attracted to Shadow at all. I found him flat and manipulative, and I thought Tawny Taylor used the special vampire power of being able to share souls during orgasm as a shortcut to an actual connection between the characters. On the very odd occasion that they work together instead of arguing, Taylor says that they make a good team, but I needed to be told because she didn’t show it in the story. Their only compatibility seemed to be in the bedroom.

Regan tried to keep running her business, even though it wasn’t bringing in money, partly to piss Shadow off, and partly because it was all she had left. With people trying to kill the new queen and leave Shadow weak, she should have been protected and stayed put, but no one explained it to her.

Call me crazy, but isn’t “queen” supposed to be a position of power and respect? In Dark Master, Shadow’s personal guards (and brothers) were not only allowed to see their new queen naked, but also to drag her around the castle. Maybe it’s because she’s human and inherently weaker than a vampire, but she was less a queen and more like just the king’s consort with a fancy title.

Where was the editor?

The second worst mistake the book makes is that it can’t make up its mind whether it’s going to have a plot. If it was simply a fuckfest for its own sake, fine, but throw in any semblance of a plot and I’ll expect a properly developed story. I’m just picky like that, especially when I’ve paid for the privilege of reading it. The sex scenes (with one very notable exception) were all right, but forgettable. I read Anita Blake and I’m complaining about the sex and lack of plot in Dark Master, so that’s really saying something.

Shadow put her in stocks while he had sex with a slave in the same room. I felt that was inappropriate for those reasons—it wasn’t a real order and he hadn’t even punished her like that for direct disobedience. Also, I thought the method of punishment was wrong because it seemed meant to punish her emotionally, but she had to put up with it because she wasn’t prepared to admit to this bully that she cared. Can’t imagine why.

So Regan’s heartbroken, but because she can’t fully see what’s happening from her position in the stocks, she paradoxically enjoys picturing herself in the slave’s role—a huge WTF (I don’t know how or why this scene wasn’t caught by the editor). She never safeworded and even though she cried “divorce” often enough in the past for far less, she shut up for this. Again, WTF?! I think it goes beyond submission to accept your husband doing someone else to teach you a lesson that he hadn’t made clear in the first place. I don’t know, maybe people in the lifestyle would say that she shouldn’t need an explanation because she had her orders, but there was NO CONTEXT for his chosen punishment and her doormat acceptance anywhere else in the book.

And if this wasn’t bad enough, Regan suffers the indignity of being unable to get away when the slave loses her balance in a state of post coital weakness and smooshes her no doubt fragrant arse in Regan’s face. I’m sorry, but proximity to another woman’s naked arse just doesn’t work for me. Not that I’m ever going to put that to the test.

Spoilerish things happen in the “story” leading to Shadow’s realisation that he failed Regan, but that punishment and his infidelity are never discussed, justified or even mentioned ever again.

They “fall in love” at the end, but I wasn’t convinced because I didn’t feel they connected, so it just seemed like a way to wind up the book.

I’m all for cheap thrills, but given that this book was published in trade paperback format and ends up with a piss weak plot as a result of its refusal to commit to even having a plot, it’s neither cheap nor a thrill. Save your money for real toilet paper.

Don’t say we didn’t warn you!