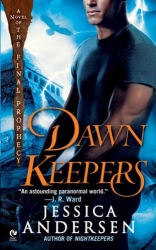 Once upon a time in Central America, an ancient people known as the Mayans ruled this part of the earth. They were a highly sophisticated civilisation, with a keen interest in astrology/astronomy and prophecy. The Mayans predicted that the world would end approximately December 21, 2012, and this is the central focus of the Final Prophecy series.

Dawnkeepers, the second book in the series, focuses on Nate Blackhawk and Alexis Gray, two descendants of the original Nightkeepers, or protectors of the barrier that is meant to stop evil from being unleashed on the world and ultimately destroying it on the prophesied date. Prior to the first book, where they were brought together, most of the Nightkeepers had no awareness of their true purpose in life. Dawnkeepers focuses not only on Nate and Alexis’s relationship, but on how the Nightkeepers begin coming into their own and how they grow stronger as a group.

This is part of what I liked about this series—the continuity is quite clear, they don’t suddenly develop all their superpowers overnight, and it’s not easy for them to defeat the baddies. They have growing pains, just like the rest of us, and the growth of the characters is a real, shown experience.

I really enjoy the unique world and use of mythology in this series. Jessica Andersen has chosen a civilisation not often used as a topic for paranormal romance, and this alone makes it worth the read. The series is very well researched, and it has made me interested enough to read more books on the topic. The only downside to this is that, due to the amount of information presented, some readers might find it a bit of an information dump. There’s also the overwhelming amount of detail, so if you’re part of the TLDR crowd, this is not the book for you.

Andersen’s writing partner is JR Ward, and I think that you can see some of her influence in the writing. This is not necessarily a bad thing—they both have the same attention to detail that is prevalent in Ward’s Black Dagger Brotherhood series.

I also liked how Andersen’s characters were real, vulnerable and even sometimes insecure. It doesn’t mean that just because you’re, in effect, a superhero, you don’t have doubts—whether it’s of yourself or what you’re meant to be doing—and that you don’t get frustrated when you can’t do things right away.

The one thing I must absolutely mention is that if you haven’t read the first book, you won’t get Dawnkeepers. Seriously, I had to read the first book again before reading this one, and even if it provides a background summary, there are a lot of details in this book that make better sense if you read the first one.

Overall, this is a pretty good series to get into. While the premise—We have to save the world!—is not unique, the way it is interpreted is. The skillful use of mythology in world building enhances the storyline, and the characters maintain their vulnerability even while attaining superhero status. While the story is occasionally bogged down by details, the action sequences are driven and fast paced and fit with the theme of the story, like an Indiana Jones movie with no aliens.

This book is part of the What’s In A Name? Challenge (time of day).