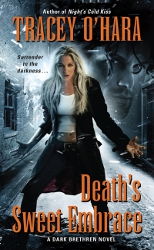 Ends with an excellent twist—one that I didn’t guess until the very end—but let down by the execution.

I’ll be honest. I thought I’d like this book much more than I did. Although the first book in the series, Night’s Cold Kiss, had its flaws, I generally enjoyed the story and was looking forward to more.

Snow leopard shifter Kitt Jordan’s dream is to be reunited with her estranged daughters and to make peace with her pack. It seems to be within her reach, until she’s called to be part of a task force hunting down a brutal serial killer. Kitt has to work alongside Raven, with whom she has a rather tragic history, and it seems that there’s still something between them. Despite the attraction, Kitt knows that getting involved with Raven again will pretty much scuttle her chances of a reunion with her pack and her daughters.

Meanwhile, the serial killer’s MO is to find young Bestiabeo (shapeshifters), paralyse them and rip out their hearts. There’s a lot of gore in this book.

I was expecting a more romancey book. Death’s Sweet Embrace does have a romance, but it didn’t feel fully fleshed out to me and too many things pulled me out of the story. The love scenes seem out of place, and many scenes don’t transition well. Kitt and Raven lack chemistry—certainly nothing like Antoinette and Christian in the first book. I didn’t feel a gradual emotional development between them.

Characters also seem to act unprofessionally, considering their position. For example, Kitt’s boss, Oberon throws his coffee mug at a glass wall after taking offense at a comment by a rival agent. Who does that? Maybe it fits in a world populated by animal shifters, but if so, I didn’t feel as though there was enough context around the characters to make it acceptable.

The prose is also…uninspired. I just feel like this book could have been so much more. For example, as Kitt is being attacked, this is part of the narrative: ‘Broken bones weren’t an issue for a Bestiabeo, the true name of her race.’ Awkward.

Or this: ‘The incorporeal apparition glowed, his pellucid form surrounded by a silver-blue aura—and Gideon’s heart ached just looking upon such ethereal beauty.’ I’m a fan of the less-is-more camp when it comes to description, so this style of writing just doesn’t appeal to me. I often overlook it in romance, but this time it just bothered me.

And the story lacks layers—frustrating when there’s actually a great plot, world building and characters to work with: ‘What had started out as something amazing had ended by leaving a foul taste in her mouth, and she was the shit who had caused it.’

At this point, I’m not sure if any of my other criticisms are just a result of me being disengaged from the story and focusing on nitpicks. There’s some POV confusion. A character is said to deliver her baby prematurely at 37 weeks. Maybe this is premature for shifters, but for humans that’s pretty much to term.

Structurally, the plot threads feel mismatched and I think the story starts at the wrong place. There’s also some unnecessary back story from Night’s Cold Kiss, which could have been less detailed and kept within the context of this book. Similarly, the romance seems tepid because it starts off at the wrong point in Kitt and Raven’s lives.

The ending has an excellent twist—one that I didn’t guess until the very end—but it’s let down by the execution. The actual resolution involves a back story that isn’t really explored properly throughout the rest of the book.

Unfortunately, I think this series is going in a direction that I probably won’t be following—more heavily towards urban fantasy and away from romance. However, if you’re after the mystery and action and world building more than the romance, this might still work for you.

An e-galley of this book was generously provided by HarperCollins via NetGalley.