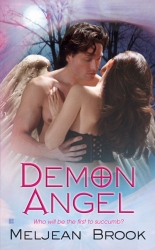 I debated whether or not to write this up as a quickie or post in detail about this book. But I’m going with the quickie because if I try and write down everything I love about Meljean Brook’s Demon Angel, it would be a humungously long post and will probably sit in draft because I’ll never get around to finishing it.

In case I’m not being clear: go and read this book.

This book is the best cross-genre (paranormal romance) novel I’ve read bar none. The paranormal elements are well fleshed out and the world building is extensive but woven into the story without bludgeoning me with details. Other bloggers have complained that this is a weakness of the book, that it slows down the pace, but I disagree. And that’s from someone with a relatively short attention span for world building. The romance is given centre stage, and the paranormal conflicts are intrinsic to the romantic conflicts. In my opinion, this is how a paranormal romance should be. You can’t take the paranormal out, and you can’t take the romance out–they both have to be there for the story to work.

The romance in the story is heady. It’s exciting and it’s complex. The central characters are immersed in shades of grey. I was filled with dread as I neared the end because I couldn’t figure out how the Brook would pull it off. But she does, and it’s glorious, and I can’t stop raving about this book. (I just had to go back and chop several paragraphs off this post because I was getting carried away.)

Very rarely do I read a book (for leisure) word per word, but I came very close with Demon Angel. It’s telling that the only thing that pulled me out of the story while I was reading was when Hugh, the hero, says he knows how to program a VCR–he lives with a super-geek and a VCR just seems so old-tech. (I forgave it, though, as a figure of speech.) Yes, that’s my biggest nitpick with this book. I borrowed this book from someone else, but I’ll be buying my own copy because I’m definitely collecting this series. Read an excerpt here.