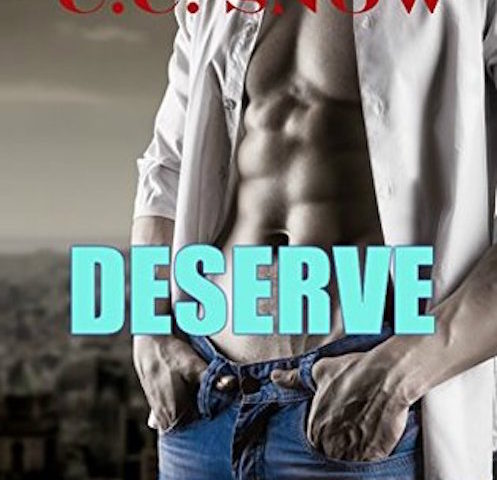 How much you enjoy this book will ultimately depend on timing. C.C. Snow is an emerging self-published author, and the lack of polish sometimes shows in the writing. But if you’re in the mood for a trope hero, Deserve certainly delivers.

And I know I’ve been saying this a little more often lately, but if you loved Fifty Shades, or maybe even the Black Dagger Brotherhood series, I’m pretty sure you’ll find a lot to love in Deserve.

Twenty-two-year old Maggie Jackson is about to start at Columbia Medical School when her brother Cael’s best friend — and her teenage crush — offers to pick her up from the airport. After overhearing Cael’s girlfriend complaining about how much his life revolves around Maggie, she wants to show him she can take care of herself. But when Sean sticks around to help her settle into life in New York … well, she’s not about to say no. And her childhood crush? Has only become hotter!

Sean Rowan is suffering from sexy hero ennui. Literally, this is how we’re introduced to him in the story:

This blonde had been giving me the eye all night and I had planned on taking her back to my place for a nice hard fuck, but my cock doesn’t seem to be cooperating.

The fucker has been too damn selective recently. Fucking snob.

I mean, WHO CAN RESIST A SNOBBY COCK?

Not this reader, that’s for sure!

Sean is the tropiest of trope heroes, and if his character is sometimes a little inconsistent, well, that’s the price a reader pays for wanting her alpha male without a side of douchebag. He’s alternately protective, lustful, growly, and marshmallowy. Which is why I think you need to be in the right mood to enjoy this hero.

At times the characterisation feels like it falls back on easy stereotypes, particularly when it came to the overprotective hero, but I think this is a common mistake for new authors, and the hero does rein himself in enough that I didn’t feel he had aggression issues.

Things take a darker turn when it becomes clear that someone might be stalking Maggie or someone close to her. The suspense plot is a little clumsy, but to the author’s credit, I didn’t pinpoint exactly who the villain was. To do this, though, the story spends time setting up a lot of misdirections that don’t really go anywhere. Some of the red herrings feel like wasted characters.

The actual romance between Maggie and Sean is sweet, and the sex gets pretty hot. Surprisingly, even when Snow is arm-deep in a cliche, there’s a quality to her prose that is able to bring out emotion beautifully.  Take, for example, this stereotypical scene when, after the first kiss, Sean apologises and declares it to be a mistake, and Maggie misunderstands this as rejection. Later, when she’s alone, Maggie is self-aware enough to know that she needs self-care:

But in my heart it’s not as clear-cut. Sometimes that little girl with abandonment issues emerges and I freaking hate it. I hate her.

… Whenever I feel rejected, I have to fight phantoms from my past. I have to tell myself that the feelings of inadequacy are all in my head.

‘Sean doesn’t want you. And the world is not ending,’ I whisper to myself.

I squeeze my eyes tightly, refusing to cry. I will cry for many things, but I refuse to waste my tears on that abandoned little girl.

At the heart of it, Sean is really just kind of a big, charming boofhead. Sometimes this feels a little forced, like when he tells Maggie that he’s ‘attracted to you and I want to explore the chemistry between us.’ Which I guess you can read as stilted dialogue, in which case you might roll your eyes, but it put me in mind of The Bachelor [ read Jodi’s excellent recaps here ], and I had every sympathy for a hero who maybe learned how to ask a girl if she wants to be in a relationship from reality TV. I mean, that’s adorable, right?

More seasoned romance readers might find some of the weaknesses in the story distracting, however. The hero’s backstory with his parents is revealed in a fairly unremarkable way. To me, it felt like the author missed opportunities to weave these revelations in a much more nuanced way throughout the story. I also felt that the tone of the narrative was much more suited to third-person POV than first.

So no, Deserve isn’t perfect. But it’s a decent standalone — yes! standalone! — romantic suspense from a new author whose writing shows a lot of promise.

For the vomit list: The heroine recounts a childhood illness, which included vomiting.

Content advisory: There are channels and cores, and we’re not talking about TV and fruit. More seriously, a female character is assaulted, and there’s an attempted rape scene.