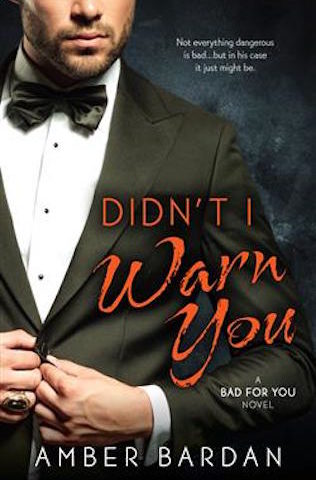 Review of: Didn't I Warn You Disclosure: Last year, I saw Amber Bardan speak on a romance panel at the National Young Writers’ Festival. Afterwards we had drinks with mutual friends, and have since chatted online several times. As a consequence, it’d be fair to say we’re friendly (at the very least). That said — I bought my copy of Didn’t I Warn You and have chosen to review it because I genuinely had things to say.

Didn’t I Warn You is Amber Bardan’s debut novel, and whoa and damn, did I have fun reading it! In the interests of transparency, my decision to read it came about purely based on Bardan’s appearance at NYWF last year where she discussed this very book! and I was deeply intrigued by the idea of an Arab hero who isn’t a sheik (I didn’t even know Romancelandia could do that!).

So our heroine, Angelina Morrison, is an aspiring writer, who wishes she had the courage to push the boundaries of her life. Then, while sitting in a cafe prepping for a job interview, Angelina notices a man who just might have been pulled from her deepest fantasies.

(Anti-)Hero Haithem Soltan notices Angelina right back. But in the way of mysterious billionaires with mysteriously dark pasts, he’s not sure if their simmering attraction is real, or if she’s a spy assassin (because of course he’s the kind of guy who needs to worry about beautiful women being spy assassins!).

Through a series of unfortunate events, Haithem ends up accidentally kidnapping Angelina, and while she’s definitely Not Okay with these turn of events … she’s on a yacht in the middle of the ocean. Whaddaya gonna do? ¯\_(ツ)_/¯

When you lay the plot development out, step by step, it sounds pretty cracktastic — Mysterious Billionaire Accidentally Kidnaps Mysterious Woman To Take Her Sailing! Then Showers Her In Expensive Gifts! Flown In By Helicopter!

But the skill of Bardan is that as each moment unfurls, you’re not just along for the ride, you’re wholeheartedly down for it. Like, yep. Of course Haithem has a French chef on board for his Mystery Sailing Tour. And why wouldn’t he try and entice Angelina to eat by arranging a cheesecake for breakfast from his French chef? And yeah, Angelina would totally proposition her accidental kidnapper. This is all just standard Accidental Kidnapping Protocol. Plus, he gave her breakfast cheesecake. Who wouldn’t bone someone for breakfast cheesecake?

For a debut, Didn’t I Warn You feels really strong. That’s not to say there aren’t a few unpolished moments, though. For instance, Angelina’s job interview is conducted by two women, Tina and Fey. If it is (as I suspect) a reference to Tina Fey, it’s not an especially elegant one. In the same vein, some of the sex-related euphemisms are purple af. But some are downright horrifying — for example, ‘love goblins’ as a euphemism for sperm. LOVE. GOBLINS.

FOR THE LOVE OF GOD PLEASE LET’S ALL AGREE THAT LOVE GOBLIN IS NOT AN OK THING TO SAY EVER AGAIN. EVER.

Here on Book Thingo, we’ve had some discussions about misogynistic behaviour from romance heroes, and there’s certainly an argument to be made that Haithem fits the bill of a douche-tastic man. He invites Angelina to travel with him on his yacht for literal weeks, with very little acknowledgement that she might have responsibilities to deal with. Or that offering money to a woman so she’d come (heh) on a sex-cation with him might place her in the position of feeling like she was being bought. Despite (or maybe because of) all this I found Haithem incredibly compelling. At every point he struggled to balance his attraction to Angelina with his suspicions of her. The fact Angelina clearly struggles with the same makes for some very delicious reading.

I loved Didn’t I Warn You; that said, I’m not sure it would be for everyone. Bardan’s writing definitely has some irreverent, funny moments, but that’s not the crux of this book. So if you’re looking for something sunny, you’ve come to the wrong place. However, if you’re a Harlequin reader you’ll probably find yourself feeling quite at home. And if you’re a fan of Jackie Ashenden or Lilah Pace, you’ll definitely want to check it out. It’s darkly seductive, with a hero who has just the right level of wtf-ish billionaire attitude, and an innocent but plucky heroine.

Didn’t I Warn You is the first in a trilogy that follows Angelina and Haithem. So while it does have a HFN ending, I suspect (hope!) there’s a more definitive HEA coming in a future book.

Content advisory: Not for those who require instant gratification